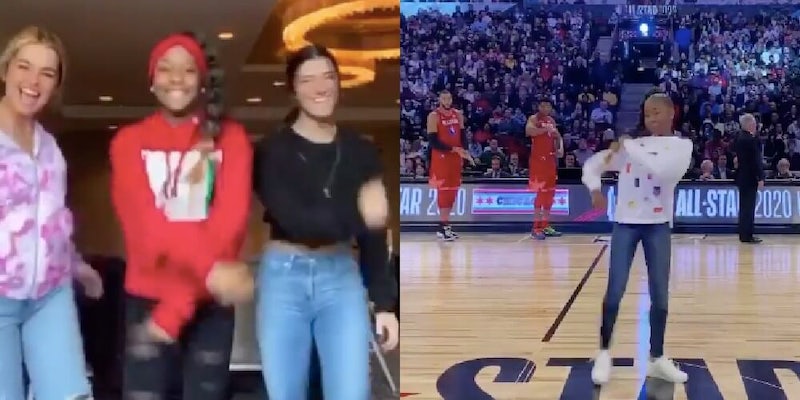 Everyone is doing the Renegade. Including the teen who started it

The dance has been viral for months, but the teen is just now getting recognition.

Months after the Renegade dance began ruling TikTok, Jalaiah Harmon, the teen dancer behind the viral moves, has finally been recognized for creating it.

The Renegade is a TikTok dance challenge set to the tune of Atlanta rapper K Camp’s hit song “Lottery.” The song is so connected to the Renegade that it appears on Spotify with the name of dance.

Over the weekend, the rapper credited Jalaiah Harmon, the 14-year-old girl who choreographed the moves, for making his song a viral success. K Camp tweeted a video of himself on Friday with the teen and her friend Skylar as they performed the dance.

“Thank you Jalaiah and Skylar for helping make lottery the BIGGEST song in the world,” K CAMP wrote. “Tell the blogs eat it up!”

Over the weekend, Harmon performed the dance at the NBA All-Star game. The NBA tweeted a video of her at the event, and Kim Kardashian posted it on her Instagram story.

All of the recent recognition is important because for many months the dance reigned over the internet without any mainstream credit to Harmon. Celebrities like Lizzo and Kourtney Kardashian have shared themselves dancing the viral moves–all without a mention of the young dancer.

The dance became famous on TikTok largely because of Charli D’Amelio, one of the most popular people on the platform. She’s known for sharing, to her more than 27-million followers, videos of herself dancing.

In October, the viral star posted a video of herself dancing Harmon’s moves. From there, the dance took off. The hashtag, #Renegade, has more than 700-million views on TikTok, and the dance was largely associated with D’Amelio.

That all began to change when reports, like the recent story from the New York Times, reported out who was actually responsible for it.

After these reports spread on Twitter, many people became upset that a young Black girl’s work had been used for gain without any sort of recognition. Videos with captions like “Charli D’amelio STOLE the RENEGADE TIK TOK DANCE” have surfaced on YouTube.

“I was happy when I saw my dance all over, but I wanted credit for it.” Harmon told the New York Times. “I think I could have gotten money for it, promos for it. I could have gotten famous off it. I don’t think any of that stuff has happened for me because no one knows I made the dance.”

But after months without credit, celebrities have begun spreading her name.

And the queen of TikTok dancing, D’Amelio herself, also shared a video this weekend crediting Harmon with the choreography. The two met at the NBA All-Star game and took some time out to do the dance together.

“Guys I would like to introduce you to @_.xoxlaii ,” D’Amelio wrote in the caption of her TikTok video. “I am so happy that she was able to teach me the original choreography that she made she is the best!”