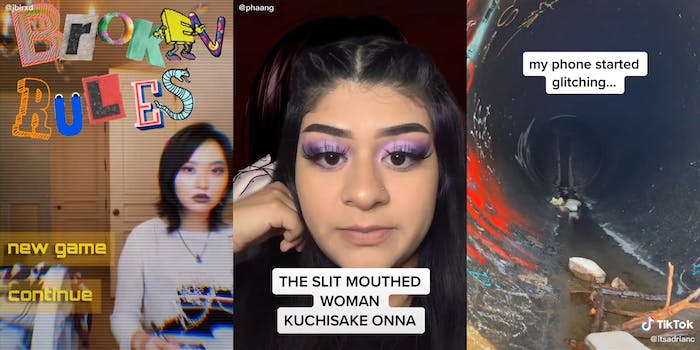 Paranormal TikTok is here to give you the creeps

TikTok creators are coming up with their own scary stories.

There are ghosts everywhere on TikTok, not just in divisive viral photoshoots.

Last year, a video went viral after Chance the Rapper claimed there was a ghost in it. In April, user reubix_cube filmed a dance to Doja Cat’s “Say So,” but many pointed out something on the stairs behind them. Last month, user Anna Banana started off a video about White Claw before being interrupted by something in the curtains.

This is post-Paranormal Activity content: There are compilations of all the weird, unexplained things that happen in the backgrounds of TikToks. A generation raised on internet lore like Slender Man is of course going to have its own ideas about what scares them—or a captive audience. The language of the platform—“cursed” TikToks—as well as its many weird niche avenues (deep TikTok) make it fertile territory for creepy content.

On paranormal TikTok, you’ll find a collection of amateur ghost hunters, mediums, and people who think their houses are haunted. Some of these accounts ramp up the theatrics of the paranormal investigation for clicks. (The Kroll Show‘s “Ghost Bouncers” sketch is real on TikTok.) Others are more subtle in their approach.

But, under the umbrella of paranormal TikTok, there are other evolutions happening.

Over the summer, a decades-old urban legend about someone hiding under your car and slashing your Achilles tendon, so you can’t run away, was circulated on TikTok as a cautionary tale. This is something I heard growing up in the ‘90s, and the story goes back even further than that, so I was a bit surprised to see how long it has survived in nearly the exact same framing.

TikTok has no shortage of accounts dedicated to retellings of urban legends, true-crime stories, or scary internet stories. Leticia Rodriguez spotlights different urban legends and folklore on her account lettylovesyou. The popularity of her videos made her “[realize] there are lots of people out there who have experienced paranormal things and also wanted to share their own stories.”

She says her most popular content is the “Scary things kids say” series, but Rodriguez has a more personal connection to paranormal stories: She tells the Daily Dot she grew up in south Texas, in a home where she heard and saw unexplained things and experienced what she describes as sleep paralysis starting around age 8 or 9. Rodriguez says she’s not entirely sure sleep paralysis is the exact term for what she experienced: “In my culture, we call this ‘Cuando se te sube el muerto,’ [which] translates to ‘When the dead gets on you.’”

Liz Phan produces similar content, reaching into internet-based stories like the Blue Whale “challenge,” as well as fan theories behind certain TV shows and movies. She says her most popular video so far is on Japanese legend Kuchisake-onna, aka “The Slit-Mouthed Woman.”

“I think its popularity would have to be derived from the fact that it’s a very popular Japanese urban legend,” she says. “Though at the same time, I feel that it’s not as known in Western cultures. So I see it as either a new story that people are interested in hearing, or a general fan favorite amongst fans of urban legends.”

Of course, the fact that these stories might not be entirely true is part of the allure.

The evolution of creepypasta

Creepypasta, the name given to scary stories and memes born on and passed around the internet, is still source material for a lot of urban legend TikTok. The platform even elevated its own version of Slender Man: Siren Head.

But TikTok is also producing its own scary stories, with some frightening real-world consequences.

The Randonautica app became popular on TikTok this summer, after being released in February. It asks adventurous users what their “intent” is, and then sends them to seemingly random coordinates based on their location. Joshua Lengfelder, one of the app’s founders, told the New York Times he wasn’t surprised at the app’s popularity: “Because basically what it is is like a machine that creates memes and legends, and it kind of virally propagates on its own.”

Over the summer, the app led a group of teens to a Seattle beach, where they found a suitcase filled with human remains. It was later identified as the bodies of Jessica Lewis and Austin “Cash” Wenner, a couple who’d been murdered by their landlord. In another viral instance, a young woman in Colorado allegedly happened upon a shooting victim after setting her intention as “death.”

Those are extreme examples, but they also likely made more people want to use the app. Randonautica is the perfect platform for crafting fake horror stories, which then evolve on TikTok. In June, one user claimed he and a friend were being pursued by men in a boat after the app led them to a beach. In August, another user was led into the woods of Pennsylvania and claimed she deleted the app right after her experience. The #randonauting tag is filled with similar videos of teens venturing into the woods and encountering creepy things, or allegedly being pursued by strangers after leaving their locations.

Others are building their own haunted locations on TikTok and, in the process, reimagining what short-form horror can look like. Creator Jay Xiao’s series “Household Rules” applies a number of abstract rules and scenarios to a supposedly haunted house, and is sometimes framed as an interactive venture.

Xiao has even spotlighted comments from people claiming they’ve had dreams about that very house, adding to the suspense.

The #netflixoriginal tag has also been applied to short-form horror, as seen through the lens of teen shows.

The element of surprise

TikTok’s format—videos on the For You page autoplay, so you’re already hooked—is also perfect for jump scare-centric content. The account Shortest Blockbusters posts clips that feature alien creatures roaming the streets, shot by a bystander, Cloverfield-style. Creator skelatorrr often films his young son in videos but edits in a jump scare or visual effect for unsuspecting viewers.

“The algorithm does a great job in presenting your videos to those who would most likely be interested in your content,” says the creator behind Shortest Blockbusters. “And because of the variety of content on the platform, the audience doesn’t always know what to expect from what they’re watching, which creates an opportunity for the storyteller to surprise them.”

Seven months of pandemic anxiety has certainly made us all wary of any more surprises, which is perhaps why creators are coming up with new ways to scare their audience.