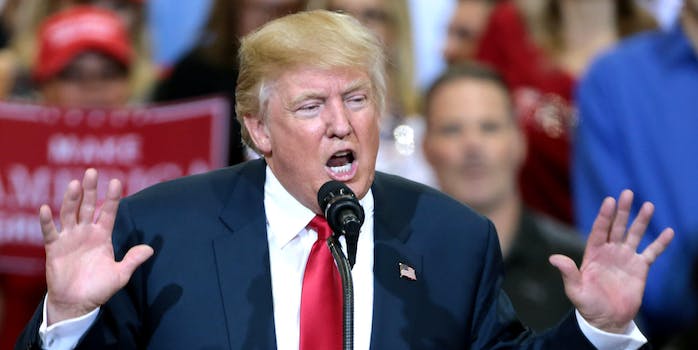 It's a troll that even duped Trump.

Over the weekend, President Donald Trump’s campaign gleefully reportedly that hundreds of thousands of people signed up to attend his first campaign rally since the coronavirus pandemic.

A huge number of those registrants are TikTokers doing a challenge in the hopes that no one goes.

A few days ago, Mary Jo Laupp, a grandmother of four who works at a high school, posted a TikTok complaining about both the rally’s original date, Juneteenth, and location, Tulsa, Oklahoma, the site of what is widely known as the “single worst incident of racial violence in American history.”

Laupp suggested that people register for tickets then not show up as a way to protest.

“I recommend all of us who want to see this 19,000 auditorium barely filled or completely empty go reserve tickets now and leave him standing there alone on the stage,” Laupp said.

Via direct message on Twitter, Laupp told the Daily Dot that she takes issue with Trump’s tone and tact, as well as having “men connected to white supremacist groups working in his cabinet.” She describes herself as a moderate Libertarian with slight leanings to the left, and said she voted third party for president in 2016.

“I was blown away when I woke up Friday morning. My followers had tripled; that video had been seen thousands of times and shared hundreds,” she said.

Laupp’s TikToks have at most a few thousand views. To date, this one has 1.8 million.

Many of the 20,000 comments are from people claiming to have registered for tickets with no intention of attending.

Others have echoed Laupp’s call. A TikTok with 75,000 views asked fans of K-pop supergroup BTS, whose internet prowess is legion, and who has a demonstrated commitment to fighting racism online, to do the same.

The Trump camp seems unaware that they’re being duped.

Although some have pointed out that registering for tickets is actually unnecessary to attend, the internet is highly amused.

“I have a whole cadre of people ordering tickets online to inflate his numbers and give him a false sense of attendance,” one Twitter user commented on Trump’s self-congratulatory tweet this morning. “When no one shows, we can all have a good laugh.”

In a TikTok posted yesterday, Laupp thanked Republicans for changing the rally’s date to June 20, rather than Juneteenth, which marks the end of slavery.

She then explained why they’d received so many requests for tickets.

“A significant number of those 300,000 reservations you had by last night are from people who don’t intend to come.”

Laupp then again urged the campaign to move the rally from Tulsa altogether.

“I’m hoping now you’ll listen. Doing this rally in Tulsa with its history of Black Wall Street is in poor taste in light of the current climate in this country,” she said, alluding to ongoing civil rights protests of systemic racism and police brutality against Blacks.

“I’m hoping you’ll do better in the future and choose your sites more carefully.”

Update 11:30am CT, June 21: The turnout for the Tulsa rally was much lower than the Trump campaign had promised. TikTok teens and K-pop stans are now taking responsibility and being credited for the low-turnout. Even Rep. Alexandria Ocasio-Cortez (D-N.Y.) tweeted at Trump’s campaign manager, Brad Parscale, saying the campaign got “ROCKED” by TikTok teens. She then shouted out zoomers and “K-pop allies.”

In a statement, Parscale criticized the reporting that any of these trolling efforts affected turnout, blaming the low numbers on the media overhyping the coronavirus risks.

“Registering for a rally means you’ve RSVPed with a cell phone number and we constantly weed out bogus numbers, as we did with tens of thousands at the Tulsa rally, in calculating our possible attendee pool. These phony ticket requests never factor into our thinking,” Pascale said. “The fact is that a week’s worth of the fake news media warning people away from the rally because of COVID and protestors, coupled with recent images of American cities on fire, had a real impact on people bringing their families and children to the rally.”

Update #2, 9:55am CT, June 28: After the popularity of her TikTok and subsequent news coverage, Laupp has found a new home, working with the Biden Digital Coalition, the New York Times reports.

While not officially affiliated with the Biden campaign, the group is a collection of supporters tight with the Biden team, who work to push the candidate and his message across social media platforms.