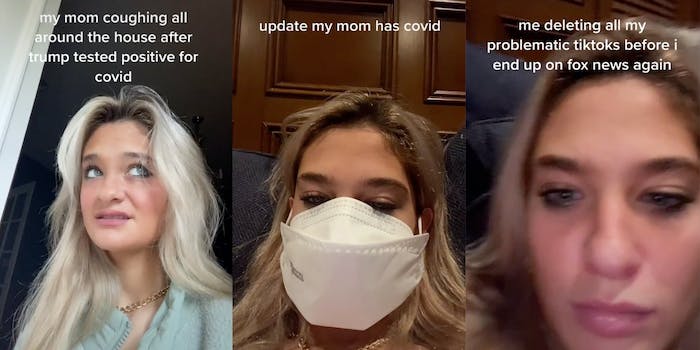 Update 7p.m. CT, Oct. 4: In a TikTok video, Claudia Conway appeared to announce that she now has COVID-19. “hey guys currently dying of covid!” read the caption of a video she posted in a bathtub.

Conway, 15, made a TikTok video on Friday afternoon saying her mom, a former Trump adviser, was “coughing all around the house” after the president’s diagnosis.

“That’s suspicious,” a voiceover says in the video. “That’s weird.”

Five hours later, Conway said in another TikTok video that her mom has the coronavirus. The Washington Post confirmed the news and reported that Kellyanne Conway had attended the Rose Garden event that announced Amy Coney Barrett’s nomination to the Supreme Court. At least seven Republicans who attended the event have tested positive for the coronavirus.

In a follow-up video, Claudia Conway wears a mask and writes that she’s “furious” about her mom’s sickness. “Dont listen to our idiot fucking president piece of shit,” she writes. “Protect yourselves and those around you.”

Conway has been an outspoken critic of the Trump administration and her mom’s position. Last month, she announced she was “officially pushing for emancipation” after learning her mom would be speaking at the Republican National Convention.

“My mother’s job ruined my life to begin with,” she tweeted at the time. “Heartbreaking that she continues to go down that path after years of watching her children suffer.”

But Conway does share her mom’s criticism of the media. In other TikTok videos Friday evening, she bashed news organizations for being “obsessed” with her social media content. She also urged followers to vote in the presidential election.

In her most recent video, Conway reflected on the clip about her mom “coughing all around the house.” She admitted: “This did not age well.”