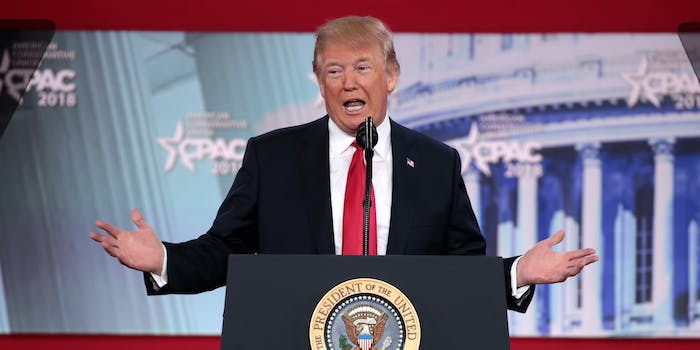 There's a lot that would need to happen.

TikTok, the popular social media app, has already faced a country-wide ban in India—and according to the White House, the United States could be next.

Secretary of State Mike Pompeo revealed that the Trump administration is considering a ban on TikTok earlier this week. Meanwhile, Amazon has ordered its employees to remove the app from their phones, citing “security risks,” according to the New York Times.

The announcement from Pompeo came as both sides of Congress have called for a national security investigation into the app and any potential ties with the Chinese government, while other data privacy concerns have been raised over the past year.

But Pompeo—and even President Donald Trump’s remarks about it—have many of the millions of monthly users in the U.S. wondering if the ban will actually happen. Popular creators on the app are already posting goodbye videos.

“With respect to Chinese apps on people’s cell phones, I can assure you the United States will get this one right too,” Pompeo said of the ban. “I don’t want to get out in front of the president, but it’s something we’re looking at.”

It is the most recent jab the U.S. has taken against China as tensions between the two countries continue to rise. TikTok, under it’s China-based parent company of ByteDance, would not be the first Chinese-based technology company to face sanctions in the U.S..

Telecommunications companies Huawei and ZTE are similarly accused of sharing information with China.

Pompeo’s comment also comes months into the Committee on Foreign Investment in the United States (CFIUS) investigation of TikTok launched last November. CFIUS has yet to release its determination.

This is what we know about Trump’s TikTok ban and if it could actually happen.

Banning TikTok is possible as seen in India. There, the app was blocked at network level which severs communication from TikTok servers to users.

But the U.S. is a different situation.

TikTok could face similar sanctions as Huawei and ZTE. The administration is finalizing a plan to bar the U.S. government from buying Huawei and ZTE products, according to Reuters.

Pompeo hinted at the two companies when he first brought up the possible TikTok ban. TikTok has also already been banned from many government devices.

A consumer wide ban would take place in app stores—however, Kurt Opsahl, the general counsel at the Electronic Frontier Foundation, told CNET there is no law that would authorize the federal government to ban an American from using an app.

One potential way to get toward a ban would be having the the Commerce Department add TikTok to what is called the “entity list.” It is a list of foreign people, organizations and businesses that are required to obtain specific licenses in order to export into the U.S.

But, the Trump administration would have to prove that TikTok participated in “trade violations or espionage or proliferation or intellectual property theft” to get onto the list, James Lewis, director of technology policy at the Center for Strategic and International Studies, told the Verge. Lewis told the news outlet that getting onto the entity list is not easy.

Meanwhile, courts have found that publishing and using code—the heart of TikTok—can be subject to the First Amendment, as Fortune notes.

The major concern surrounding TikTok is that user information and content is susceptible to the reach of the Chinese government.

Experts are concerned that the Chinese government has access to this information as TikTok’s parent company is based in Beijing.

Yet, TikTok maintains that U.S. data is not held in China nor do they share information with the government.

“TikTok is led by an American CEO, with hundreds of employees and key leaders across safety, security, product, and public policy here in the U.S. We have no higher priority than promoting a safe and secure app experience for our users,” a spokesperson for TikTok told the Daily Dot. “We have never provided user data to the Chinese government, nor would we do so if asked.”

China’s reach over the company was questioned again when anti-China content was seemingly blocked from the platform. The app was accused of deleting content from the pro-democracy protests in Hong Kong last year.

It was another allegation that TikTok denied participation in.

To combat its widespread criticism, TikTok announced it was launching a Transparency Center. The move is to allow outside experts to examine their practices and hopefully clear their name.

Perhaps more cynically, TikTok has become a platform that has trolled the president several times in recent weeks—perhaps making the administration more aware of the other issues that have been brought up in the past.

TikTok users have flooded Trump’s official 2020 app with bad reviews, have review-bombed Trump’s businesses, have attempted to troll the campaign’s online store, and artificially raised the RSVP’s for the president’s reelection rally in Tulsa, Oklahoma higher, skewing how many people the campaign thought was attending the rally.

What about other social media platforms?

Even if the allegations were true, most social media platforms participate in data sharing practices.

Google has been sharing location histories with the police since 2016. Geofence warrants allow law enforcement to identify cell phones in a specific place and time. Also, let’s not forget Facebook.

Many TikTok users have pointed out that other social media companies collect vast amounts of information while decrying the potential ban on Twitter.

Who wants a TikTok ban?

But, the U.S. is not alone. Australia is also considering a similar ban according to the Guardian.

While the government has set its sights on TikTok, users certainly do not want to see the app banned.

That was readily apparent on Thursday when TikTok glitched and every video appeared to have zero likes.

TikTokers thought the end was near.

“everybody coming to twitter because their tik toks have 0 views #tiktokban,” one person tweeted.

“Us: they won’t ban tiktok in the US lmao no way TikTok: 0 views, fucked up fyp 0 likes #tiktokdown,” another person added.

TikTok assured that the error was just a glitch and not a ban—yet.