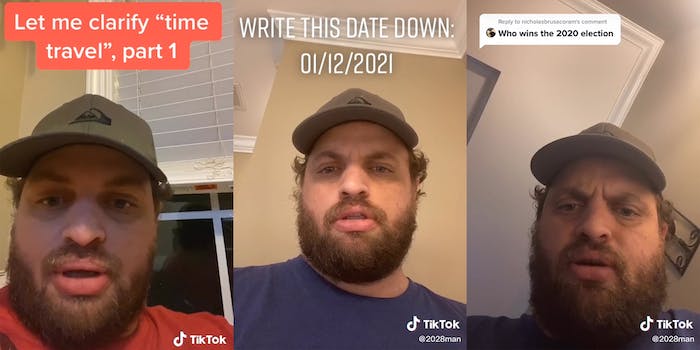 What’s up with all these time travelers on TikTok?

According to 2028man, Biden wins the presidential election. Oh, and we're all going to die.

He claims he’s here from the year 2028, and has seen America’s future. He and a “handful” of others were sent back to 2020 to “change” things. He references the start of the “great collapse,” which will eventually result in 90 percent of the population dying, and says the 2020 election ends with Biden winning and Trump having to be removed from office.

On TikTok, he goes by 2028man, and he claims he’s a time traveler. It’s an extension of time traveler videos on YouTube: People (usually men) declare they’re here from some future date and have very important info, for clicks. One of 2028man’s more viral videos is a prediction that Hurricane Kyle will hit Houston on Aug. 10 and be more devastating than Katrina.

Given that our current reality is so bleak, these predictions aren’t that left field, but they still add to the misinformation that spreads quickly on TikTok. (Remember the “psychic” who said COVID-19 would be gone by June?) Unsurprisingly, 2028man’s amassed more than 170,000 followers in less than a month, many of them hungry for any shred of guidance or insight. Comments on his posts range from asking if Pizzagate was real to if there will be a One Direction reunion. The debate about him on r/timetravel is a little more cynical: “Nobody has worn quicksilver since 2007,” goes one comment. 2028man also has a merch store set up, which led many to question his motives.

Another alleged time traveler, 2029man, says he was sent back to 2020 from—you guessed it—2029. His script is similar: He references the “great collapse” (also referenced in roleplaying game The Elder Scrolls V) and claims the 2020 election ends with Trump being forcibly removed. While his predictions are more rooted in pop culture (Lil Uzi Vert will be exposed as an alien, Addison Rae retires from TikTok in 2022), he’s been equally controversial and one account has tried to “expose” him.

There’s been more possibly manufactured drama: 2028man and 2029man have called each other out in videos, though neither have really explained why they chose TikTok as their platform.

In the current timeline, 2028man posted his first video on June 15, and 2029man posted his first video on June 16. They both use the account name “The Messenger” and hashtag #lenoxteam253, suggesting something more coordinated or stunt-driven. Since June 15, similar accounts have appeared: 2025man, 2027man, 2039man, 2044man, time_travel2030. These accounts are a little less serious; some appear to be mocking the format, though they also parrot predictions.

Countering all these predictions from men, 2028woman reveals that she is also a time traveler and there are “no men left after the great collapse.” Now this is the kind of info we need from time travelers.

Some onlookers seem amused by this drama. Others seem to be taking these predictions seriously—and making themselves even more anxious. We’ve reached out to 2028man and 2029man for comment, but perhaps they already knew that.