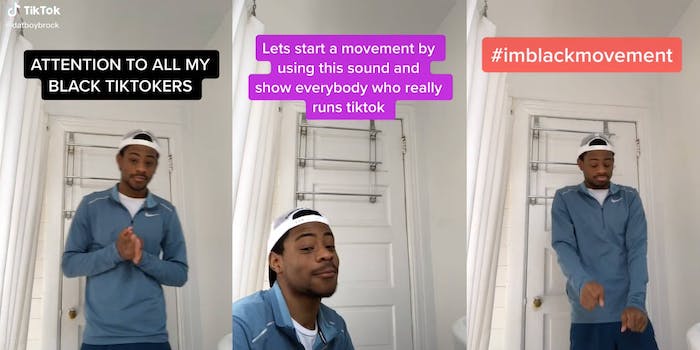 Some say they’ll leave the app if it doesn’t make a change by June 19.

In the four weeks that she’s been on TikTok, Lex Scott has been banned for two. Scott said TikTok removed two of her videos discussing police brutality because they “violated community guidelines.”

Scott, the founder of Black Lives Matter Utah, had seen videos from other Black creators who said they were facing the same problem: When they made TikToks to call out racism, they were taken down. Other TikToks containing racist remarks, they say, remain on the website.

“You feel powerless, like someone has taken away your rights of expression,” Scott said. “You cannot believe you are being punished for speaking out against racism, but the people who are posting actual racist content are never held responsible.”

TikTok did not respond to a request for a comment but has previously admitted to “shadowbanning” videos from people who were deemed as susceptible to being bullied. This prevents TikToks from showing up on the “for you” page and being widely seen.

On May 7, Scott posted a TikTok describing an app wide “Blackout” to take place on March 19, Malcom X’s birthday.

Scott said the video didn’t immediately gain traction but received more attention after other creators used the hashtag #ImBlackMovement, which was created by Elijah Brockington (@datboybrock).

Scott said the goals for the Blackout, which occurred on Tuesday, was for users to only “like” content from Black creators, change their profile pictures to a Black power fist, and create videos of themselves to raise awareness.

“This video can talk about how Black creators are being banned, how videos are being taken down, and how white racists are allowed to flourish,” Scott said in her TikTok.

Iman (@theemuse) saw Scott’s video about a week after it was posted and created her own video to amplify the Blackout.

Iman said after seeing that her videos had racked up 10 million views, she was shocked.

“I never expected it to do this,” said Iman, who chose not to share her last name for privacy reasons. “I kept scrolling on my ‘for you’ page, and I saw Black creator after Black creator. It was the most amazing thing because it’s nothing I’ve ever seen before.”

Iman said she’s also had TikToks removed, including one where she called out another creator for talking about buying Black people.

Often, she said Black creators like herself aren’t given a reason why the post was removed, which is not normally TikTok’s practice.

“A lot of pro-Black creators, they’re just trying to spread the message of equality,” Iman said. “When you’re constantly shadowbanning, taking down videos uplifting our communities, that’s when it gets harmful, especially when you allow white supremacists to reign on the app.”

After seeing the success of the Blackout protest, Iman is calling for another protest on Juneteeth. She wants her followers and other creators to leave TikTok for a day and rate the platform one star on the App Store.

Brockington said he plans on participating.

“This is important because in (the) world we live in today, where Black people have a lot of our culture appropriated or taken from us, I feel like there’s something that we should do let people know … we make good content too,” Brockington said. “It’s just not Caucasian people blowing up on the app with 50 million followers. We deserve some of the hype, too.”

Scott has also created another iteration of the Blackout: a call to post about and support Black-owned businesses from June 15 to June 19. She said she hopes people participate in both hers and Iman’s ideas to create a change within TikTok’s policies.

“[TikTok should] change community guidelines and allow Black people to speak,” Scott said. “Racists never want to hear about racism… because then they have to face their own place in the oppression of Black and brown people. When we make a video calling them out on their racism, they don’t want to see it. They flag us, we get our accounts taken down and TikTok is complicit.”