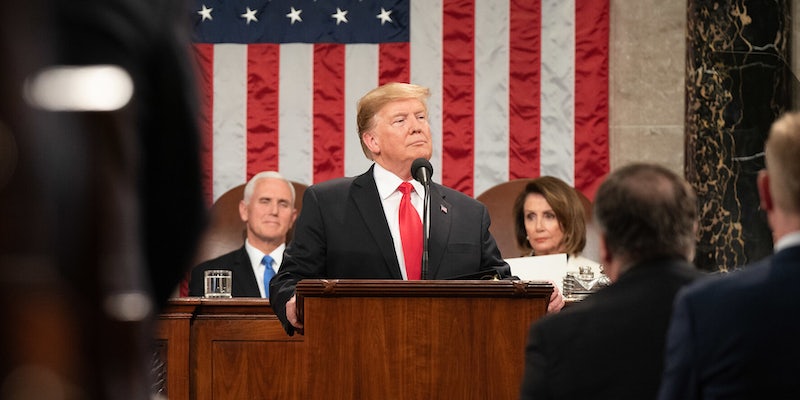 How to watch Trump’s State of the Union address tonight

Here's where you can watch Trump's third State of the Union address.

President Donald Trump tonight will deliver his third State of the Union address before Congress.

The speech comes as the Senate is winding down its impeachment trial brought up against him—and with an acquittal all but assured, it’s likely the president will use the speech to springboard forward as the 2020 election looms.

Here’s what you need to know about tonight’s State of the Union address:

Trump will deliver his speech before the joint session of Congress around 8pm CT.

Who is giving the Democratic rebuttal to the State of the Union?

2020 Democratic presidential hopeful Sen. Bernie Sanders (I-Vt.) is also delivering his own response to Trump’s address—just as he has in the past.

How can I stream the State of the Union?

If you’re looking to stream Trump’s address, you’re in luck: there are a lot of places you can watch it.

C-SPAN will stream the State of the Union on its website. You can watch it here. The White House is also streaming the entire speech on its YouTube page.

NBC News is also hosting a live stream of Trump’s address on its YouTube page. You can watch it here, or below.

Other ways to stream the State of the Union

CNN is available on a handful of streaming services.

For a more à la carte service, look to Sling TV. It offers two cable packages, Sling Orange and Sling Blue, both of which cost $25 per month. If you grab them both (Sling Orange + Blue) you can save $10 per month. Sling Blue offers more bang for your buck with over 40 channels, including sports necessities like FS1, NBCSN, and NFL Network. You’ll also gain access to the usual cable mainstays like Food Network, Discovery, Cartoon Network, SYFY, and FXX. Here’s the complete guide to Sling TV channels. CNN is available in Sling Orange and Sling Orange + Blue packages.