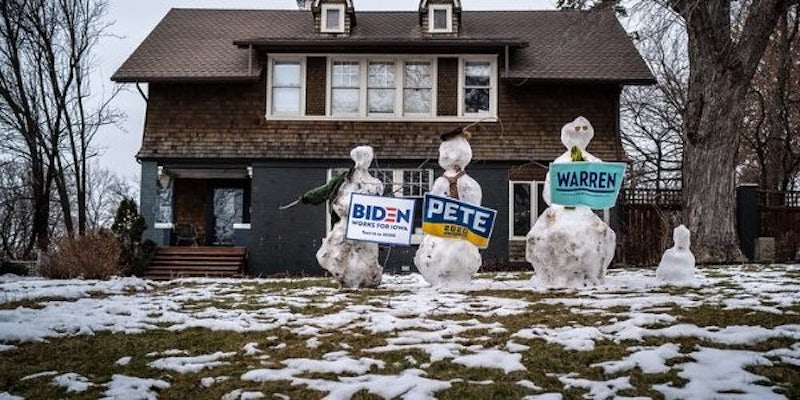 These Iowa caucus memes are the only winner from last night

Last night’s Iowa caucus is best described as a catastrophe. There were problems with the voting app, delays reporting and tabulating results, confusion, drama, conspiracy theories, and premature victory laps by no less than five candidates. As of Tuesday morning, it still isn’t clear which Democratic presidential candidate won.

The Democratic party on the national, state and local levels is busy trying to sort through a mess that has already become a public relations nightmare. There are serious questions to be answered in the days and weeks ahead.

For many, this episode makes the case for paper ballots. Some have called for ending caucuses in favor of primaries and questioned Iowa’s outsized role in the presidential nomination process.

Amused social media users, meanwhile, have memed the debacle, which also inspired #IowaCaucusDisaster to trend on Twitter. There are cats declaring victory, Sesame Street characters, Florida jokes, and more clowns than a casting call for It.

#IowaCaucusDisaster He's on his way to help in Iowa! pic.twitter.com/ba1yBAnj2p

This is my cat. Her name is Butter. She is declaring victory in Iowa. Now on to New Hampshire!#IowaCaucuses #IowaCaucuses2020 #IowaCaucusDisaster pic.twitter.com/Xg3kcgWqpv

I woke up this morning to read up on some election results and learned about the debacle. Then I was thankful that for once, #Florida didn't screw up an election. #IowaCaucusDisaster pic.twitter.com/j395E17ERS

Congratulations to Jeb Bush on his win in the Iowa caucus, you did it big man #IowaCaucas pic.twitter.com/DYvoVBYoxC

Me waking up and checking the result of the #IowaCaucas pic.twitter.com/N5U9jZqTXu

What MEME would accurately depict your view of the DNC imploding? I'm all…. #IowaCaucas pic.twitter.com/xKPKO8l9pY

#IowaCaucas Iowa has thrown out the app and decided to use Iowa computer technology pic.twitter.com/91ZyvonMPu

Me thinking that 2020 was gonna be the year we were fair to the voting process and Bernie was gonna get a real shot #IowaCaucas pic.twitter.com/JBX1oxV03f

The DNC is bringing in someone who they feel is good at predicting outcomes to decide the winner of the Caucus. #IowaCaucas pic.twitter.com/gBSNBWF5oC

The results are set to be released later today (or maybe even tomorrow).

There are some indications that Sen. Bernie Sanders (I-Vt.) will be declared the winner. Sanders and the other candidates are already well on their way to New Hampshire, though.