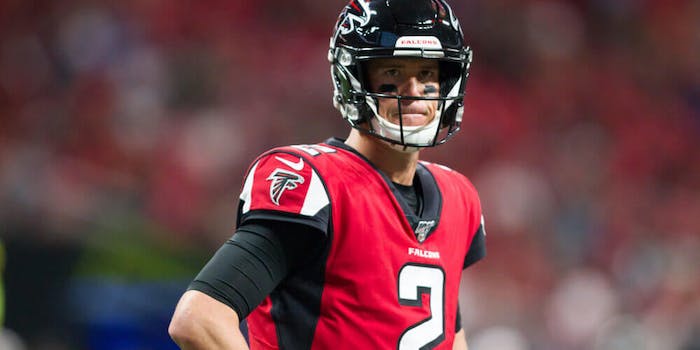 How to stream Falcons vs. Colts in Week 3

Can Atlanta get it together on the road?

The last time the Colts played the Falcons in 2015, a hobbled Andrew Luck watched in a T-shirt as Adam Vinatieri drilled a game-winning field goal. Matt Ryan and Julio Jones put up big numbers in a losing effort on the road.

On that day Matt Hasselbeck led Indianapolis, and this time, Jacoby Brissett has the gig at quarterback following Luck’s abrupt retirement last month. Is Brissett good? Sunday will go a long way toward finding out. The Falcons are in many ways the perfect baseline for NFL competency. Everything works, but less well than it should and for whatever reason, this team is just different on the road: Less effective and more susceptible to disappearing for three quarters only for Ryan to fling the pigskin in garbage time toward a respectable final score. (See: Week 1.)

Despite a thrilling Sunday night win over Philly for the Falcons, the Colts are home favorites and field the better roster by a hair. Both teams feature dynamic offensive weapons. Here’s everything you need to know about streaming the game, including what to watch for on the field.

There are a number of options for watching the Atlanta Falcons vs. Indianapolis Colts on streaming platforms that carry CBS. However, consult a coverage map to see what game your regional channel will be playing. If a game is not being carried in your area, the only option might be an NFL Sunday Ticket package. CBS All Access is the network’s answer to Netflix and Hulu. With it, you’ll be able to live stream CBS and the 2019 Grammy Awards. Plus, there are 10,000 episodes of CBS television to binge, including hit shows The Big Bang Theory, Big Brother, and NCIS. You’ll also be able to stream CBS All Access exclusives like Star Trek: Discovery. Falcons vs. Colts: Why it matters

Is it win-or-go-home time already? It’s only Week 3 but for Atlanta and Indianapolis, two 1-1 teams that should be battling for the postseason in December, this isn’t an outing you can afford to drop. This begins a three-game tour of AFC South opponents for the Falcons, who play the Titans and Texans next. We’ll know whether Dan Quinn can get off the coaching hot seat on the other side. For the defensive-minded coach, it’ll be his offense that settles it. Ryan hasn’t had this much talent in more than 10 years as Atlanta’s QB: Breakout first-round receiver Calvin Ridley lines up opposite the league’s most uncoverable receiving threat in Jones. And with Mohamed Sanu now in the slot, the 2019 Falcons come fully loaded with underneath routes designed to keep the chains churning.

The Colts, however, have more talent roster-wide The question is whether Brissett can keep getting better. This is an offense designed to get its playmakers open, but eventually, the tape study neutralizes the smoke and mirrors that come with designed gimmicks for T.Y. Hilton. Can Brissett get better at hitting receivers as they break their routes? Can he improve his timing and anticipation? You can’t beat Matt Ryan as a game manager.