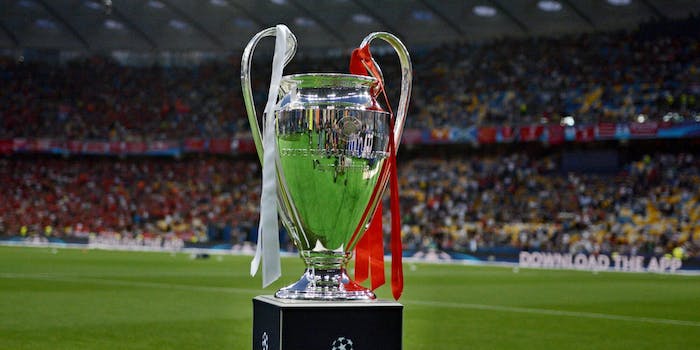 How to watch UEFA Champions League online for free

The Champions League is literally the best of the best in Europe—and it goes nearly an entire calendar year.

Imagine if you could take the best clubs teams that Europe has to offer and have them play each other. You might have Real Madrid take on Bayern Munich, Barcelona take on Liverpool, and PSG take on Juventus, which sounds pretty fantastic and star-studded and a must watch for soccer fans. That’s the UEFA Champions League in a nutshell: an annual tournament in which Europe’s best pro soccer teams—and thus, many of the world’s best players—face off for one of soccer’s most prized trophies.

Started in 1992—building from the European Champions Cup that only featured league winners from Europe’s prime soccer-playing nations—the UEFA Champions League features the top 32 European club teams. In June, UEFA holds play-in matches to select six slots; those teams, plus 26 pre-qualified teams, make up eight groups of four teams each, which play in a group stage, much like World Cup entrants do between September and December. (Matches are typically on Tuesdays and Wednesdays to fit in between the weekend matches teams play in their respective leagues.)

From that field, the first and second place teams in each group advance to a 16-team knockout round that starts in February and goes through May; each round leading up to the final has two legs, with each team playing a home and away match to determine who advances and who goes home. The final, typically in late May or early June, is a single match at a neutral site determined months in advance. The Wanda Metropolitano in Madrid, home stadium for Atletico Madrid, will host the 2018-19 finals on June 1.

Which UEFA Champions League teams should I know?

Though the participating teams vary from year to year, there are a number of perennial contenders able to qualify each year. The best leagues in Europe get multiple invitations: For the 2018-19 season, England, Germany, Italy, and Spain each got four slots, France and Russia got three slots each, a larger group (including Portugal, Belgium, and the Netherlands) got 2 slots each, and a number of other countries get a single slot. UEFA defines Europe broadly: Israel, Kazakhstan, and Georgia are counted among the 55 UEFA nations.

From Spain, you can typically expect that Barcelona, Real Madrid, and Atletico Madrid will be in the mix, with Sevilla or Valencia rounding out the top four. In Germany, Bayern Munich and Borussia Dortmund are typical entrants, with Schalke and Hoffenheim being part of the 2018-19 equation, but RB Leipzig is looking to be part of the 2019-20 party in its quick soccer ascendancy since it became part of the Red Bull soccer family. Juventus has dominated Italian soccer in recent years, with Napoli, Roma, AC Milan, and Inter Milan among the other Serie A teams typically in the mix.

The top scorers in the tournament to date (heading into the June 1 finals) are:

Lionel Messi, Barcelona: The legendary Argentine player lapped the competition with 12 goals throughout the tournament; he was a hero against Liverpool in the first semifinal leg but couldn’t produce a goal when his team needed it the most in the second leg.

Robert Lewandowski, Bayern Munich: The Polish striker has been an integral piece of this dominant German team in recent years, but may seek a new challenge soon. Rumors have him MLS-bound.

Sergio Agüero, Manchester City: The Argentine striker has led the talented team’s quest for trophies in 2019; they already have a League Cup and look to add a Premier League title and FA Cup to their coffers, but a Champions League title will have to wait for next season.

Cristiano Ronaldo, Juventus: The all-time Champions League scoring king added six goals to his lofty totals in a new uniform. After leading Real Madrid to three straight titles between 2016 and 2018, he moved to Juventus and ended up ousted by an Ajax team that made a remarkable run.

Dušan Tadić, Ajax: The veteran midfielder was a member of an Ajax team that came tantalizingly close to the Champions League finals. It took a late miracle goal by Spurs’ Lucas Moura in the dying throes of the second leg to finally defeat the team that took out defending champions Real Madrid and a tournament favorite in Juventus.