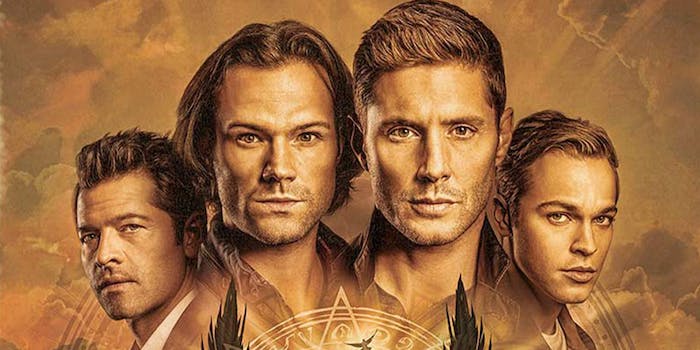 How to watch ‘Supernatural’ season 15 online

Welcome to the end.

To paraphrase Hans Gruber from Die Hard, “Then the Winchesters wept, for there were no more monsters to kill.” After 15 seasons of following the family creed of “saving people, hunting things,” the Winchester boys are hanging up their salt-firing shotguns because they may have just annihilated every supernatural being known to man. Wendigo? Check. The Chupacabra? They fought that one on four different occasions. Demons, wraiths, vampires. djinns and even ghouls have all crossed paths with the Winchesters and more often than not met their respective matches.

So before this whole demon-demolishing gets stale, Dean and Sam are getting the sendoff they deserve. After meeting God in the final episode of season 14, the Winchesters received a gun that can kill anything. In usual Dean fashion, he uses this weapon of insane power to try and kill the almighty himself. Justifiably enraged, God unleashes the armies of hell on the earth, unleashing literal armageddon. Talk about a pickle. Will the Winchesters weasel their way out of this one? Will they have a mid-season break-up in the usual Supernatural fashion? Expect the usual Supernatural surprises when the show returns October, 10.

Here’s everything you need to know to watch Supernatural.

How to watch Supernatural

How to catch up on Supernatural episodes

If you’re looking for a place to catch up on older episodes of Supernatural, there are a couple of solutions.

While it’s a season behind, you can watch seasons 1-14 on Netflix. You’ll definitely want to catch up on older episodes before diving into season 15.

You can catch up on select recent episodes of Supernatural on the CW website. You can watch most of the episodes for free, so long as you don’t mind sitting through commercials. But after a new episode “expires,” you’ll need to sign-in using your credentials from one of the live TV services above to stream the episode on-demand.