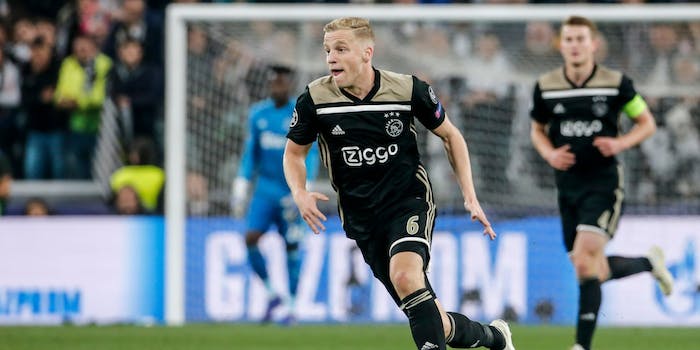 How to watch Ajax vs. Tottenham online for free

A Champions League final hangs in balance for one of two Cinderella teams.

Both Ajax and Tottenham have surprised in their run through this season’s UEFA Champions League tournament. Whoever emerges Wednesday from the second match of the two-leg playoffs will arguably be the most surprising Champions League finalist in recent memory. Ajax has a leg up, scoring an away goal to win 1-0 in Spurs’ sparkling new stadium last week. However, it’s certainly not an insurmountable mountain for Spurs to overcome. If they can do it, they’ll join Liverpool as the first English finalists since Chelsea won in 2012; conversely, Ajax would be the first Dutch finalists since, well, Ajax, back in 1996.

Ajax vs. Tottenham: Why it matters

A Champions League final appearance hangs in the balance for one of two unlikely teams. Tottenham comes into this match with a lacking end-of-season form in domestic play. The good news is that, because of even more dismal play from their closest challenges, they still look more likely than not to finish in Champions League position for next year. The worrying news for Spurs fans is that landing in the Champions League finals is far from guaranteed even for teams firing on all cylinders, and this is an opportunity Spurs won’t want to squander lest they don’t get this chance again. (Especially since Spurs-Liverpool would be the first all-English Champions League final since Manchester United bested Chelsea in 2008.)

Harry Kane, who would help Tottenham’s cause immensely right about now, is still recovering from an ankle injury, so they’ll have to rely on other pieces in the very good lineup they’ve assembled.

Should Ajax advance, it’ll be in a remarkable run in which they’ve already overcome Real Madrid and Juventus, with away wins in all three knockout rounds.