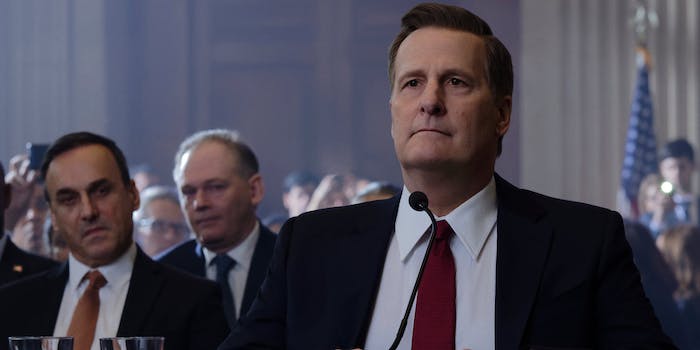 How to stream ‘The Comey Rule’

James Comey takes on the president.

From on A Higher Rule by former FBI head James Comey comes a political thriller based on true events.

James Comey is a life-long lawman, and through a series of unfortunate events, he becomes a pivotal power broker in October of 2016, when Hillary Clinton and Donald Trump were vying for the presidency. After Trump squeaks by an electoral college win, the new comander-in-chief tries to dress down Comey, to see if he’s willing to play ball. What follows is a political thriller that feels all too real…because it is.

Here’s everything you need to know to stream The Comet Rule.

What is The Comey Rule?

The political thriller based on James Comey’s head bumps with President Donald Trump will be released in two parts.

How to stream The Comey Rule

The Comey Rule is available on a few of the major live TV streaming services. When trying to decide which one is best for you, you’ll want to weigh the cost, the other channels you’ll receive, and the compatible devices for streaming.

The Comey Rule on Prime Video

If you want Showtime and already have Prime, the news is good: that will cost you only $8.99 a month. Where Amazon Prime has the leg up on Hulu is its channels interface. Amazon’s menus are simple and clear, which is why we prefer them. Your normal videos are listed in the main menu of Prime, with your extra subscriptions like Showtime or Shudder stored in the clearly marked “Your Channels” tab.

The Comey Rule on Hulu

Hulu Live TV is one of the most popular ways to stream live TV, perhaps because you gain access to a massive library of on-demand content including classic and current TV shows and movies, not to mention Hulu’s original programming. If you already subscribe to Hulu, adding Showtime through the Hulu app makes plenty of sense. You won’t need to learn a new app, and you get the same great content as what’s available via Showtime Anytime. Best of all, you’ll save $2 a month.

If you prefer to skip the Live TV option, Hulu with Limited Commercials is $5.99 a month and Hulu with No Commercials is $7.99. Both unlock Hulu’s entire collection of movies, shows, documentaries, anime, and must-see Hulu originals. The only difference, as you might’ve guessed, are those commercials. You can also add Showtime for the same cost via Hulu with Live TV, the service’s streaming TV option. It’s worth noting that if you’re a new user, Hulu’s interface has a bit of a learning curve thanks to its often complicated menus, but Hulu provides a great viewing experience once you learn the ropes.

The Comey Rule on Sling TV

If you prefer your streaming services more à la carte, look to Sling TV. It offers two cable packages, Sling Orange and Sling Blue, each of which costs $30 per month. If you grab them both (Sling Orange + Blue) you can save $10 per month. Sling Blue offers more bang for your buck with over 40 channels, including sports necessities like FS1, NBCSN, and NFL Network. You’ll also gain access to the usual cable mainstays like Food Network, Discovery, Cartoon Network, SYFY, and FXX. Whichever package you choose, you can save $10 on your first month. Here’s the complete guide to Sling TV channels.

The Comey Rule on FuboTV

Fubo is a solid pick if you want to watch Showtime, but even more so if you also happen to be a sports fan. There are different channel packages available whether you’re looking for basketball, soccer, golf, or even outdoor sports like rock climbing. But no worries, all the great cable channels you’re after are here too, including Viceland, Bravo, and IFC.

If you want to watch Showtime but also happen to have a family, YouTube TV is a great solution since one subscription can add up to six accounts (and each account comes with unlimited cloud DVR). You can’t beat the variety, either: There are sports channels like NBCSN, NBA TV, and four ESPN channels, while Disney, Disney XD, Disney Junior, and Cartoon Network will keep any kid (or kid at heart) busy for hours. It also comes with a few Spanish-language channels like Telemundo and NBC Universo. AMC, BBC America, and IFC are there too, so you won’t miss out on all that prestige TV. (You can find the full list of YouTube TV channels here.)

The Comey Rule on the Showtime App