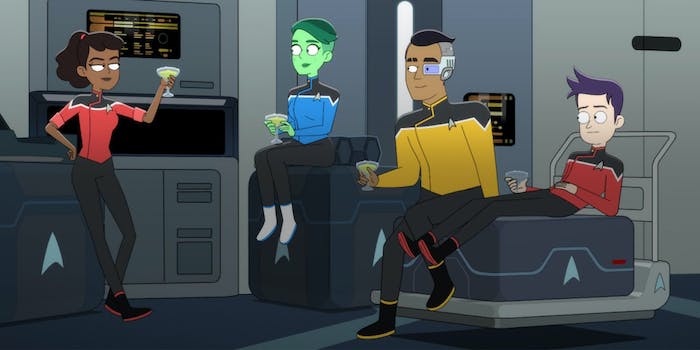 Starfleet goes to the slackers.

The utopian future of Star Trek is full of people full of ambition. Brilliant engineers doing their best to keep the warp core in shipshape to Heroic lieutenants looking to take the fast-track to command are just a few of these bright, young heroes. Star Trek: Lower Decks will be showcasing Starfleet recruits from the other end of the ambition spectrum.

Yes, for every Commander Worf or Doctor Bashir, you’re bound to get a Starfleet member who’s just clocking his hours, getting a free ride to tour the galaxy in style. The lower decks in the U.S.S. Cerritos (one of Starfleet’s least important ships) is packed full of such intergalactic slackers, chief among them being Beckett Mariner. Despite being pretty good at all things Starfleet, in the end, Mariner mostly just wants to skateboard and eat pizza. For the first time in Star Trek history, Mariner and her pals will share the spotlight, in this animated sci-fi comedy.

Here’s everything you need to know to stream Star Trek: Lower Decks.

What is Star Trek: Lower Decks?

When CBS All Access premiered, it launched with a new Star Trek TV show with Star Trek: Discovery. There are a few more spinoffs on the way, but Star Trek: Lower Decks will be the one to premiere first. It’s also the Star Trek franchise to be animated since the 1973 Hannah Barbara joint Star Trek: The Animated Series.

If you want to stream Star Trek: Lower Decks, you’ll need CBS All Access. The streaming service is the network’s official entry into the streaming arena and set the tone for other major networks launching their own streaming services. (Looking at you, Peacock.) CBS All Access anchors itself in the vast CBS show library, going into TV history as well as relying on the Star Trek series and the crime dramas that help define it today. It also has a selection of movies tied to Paramount’s ownership by CBS parent Viacom. It’s also a destination for live events like the annual Grammy Awards, and it’s becoming a destination for live sports fans. The 2020 NWSL Challenge Cup and a new role as Champions League soccer host make it a legitimate player in sports programming.