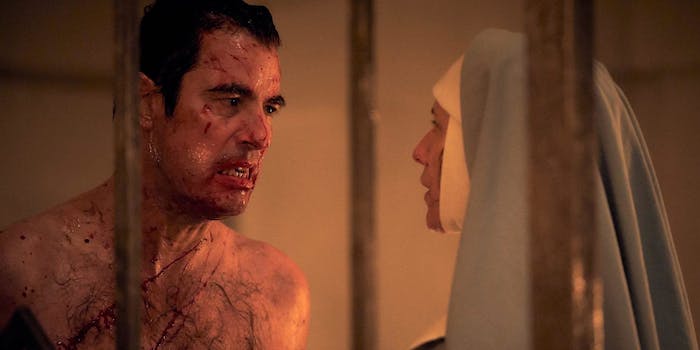 From the creators of 'Sherlock,' there's a new 3-part adaptation of the classic vampire novel.

In the 10 years since Sherlock premiered on the BBC, showrunners Steven Moffat and Mark Gatiss have carved out a very specific brand. Also known for their work on Doctor Who , they’re famous for flashy, splashy genre dramas with plenty of quips and twists. Fans praise their fast-moving plots and witty dialogue, while detractors complain of style outweighing substance, pointing out the sexist and racist themes lurking under the surface. The new Dracula adaptation lives up to some predictable expectations for their work, but not in a good way.

Airing as three 90-minute episodes on the BBC and Netflix, Dracula stars Danish actor Claes Bang as the title character. Like most screen versions of the Count, he doesn’t bear much resemblance to the character in the book. Aesthetically, he’s a hunkier version of the classic Bela Lugosi model, but personality-wise he’s a classic Moffat/Gatiss character, fond of cheesy one-liners (“You’re looking rather… drained.”) and executing his villainous schemes with maximum panache and minimum sense. When he snarls with bloodlust, he looks like Mr. Bean wearing Halloween fangs. Menacing, he is not. He isn’t sexy either, which is more of a surprise. The show’s initial announcement made a big deal over Claes Bang’s sex appeal, but he’s significantly less charismatic than the much weirder-looking Gary Oldman was in the same role. As for all the buzz about his potential “bisexuality,” we’ll get to that in a moment.

Episode 1 begins as a relatively traditional retelling of Jonathan Harker’s journey to Dracula’s castle, recounted in flashbacks to a pair of nuns. It’s basically the same framing device as an interrogation scene, so yes: They found a way to turn Dracula into a crime drama. One of the nuns, Sister Agatha (Dolly Wells), turns out to be the show’s secret co-protagonist, a vampire hunter with a cynical attitude to her religious calling. We’re clearly meant to see this as a cat-and-mouse game between two strategic masterminds, but Dracula doesn’t come across as very smart. He mostly stays ahead thanks to his arsenal of supernatural powers, while Agatha is the cleverest person in the room —not to mention the most entertaining, thanks to Wells’ confidently smug performance.

Mark Gatiss is a well-known horror aficionado, and the show definitely takes cues from Hammer Horror, emphasizing campy hijinks over real scares. It’s also very light on psychological tension, with Dracula and Harker (John Heffernan) acting out the most basic possible version of a gaslighting drama. We’ve seen this relationship play out many times before: the morally upstanding young Englishman, kidnapped and tormented by the dastardly Count. This interpretation offers nothing new aside from a more explicit acknowledgment of the homoerotic subtext… which somehow manages to be less homoerotic than other adaptations. Despite brief appearances from a couple of queer side-characters in episode 2 (plus Dracula’s ambiguous sexuality, preying on both men and women), it’s predictably regressive.

One particular exchange was hilariously transparent. “You could be my finest bride,” says Dracula. “The others just became beasts, but you kept your spirit! Jonny, you’re just like me!” To which Jonathan Harker replies: “I’m not like you!” before burning Dracula with sunlight reflecting off a crucifix. You see, our heterosexual Victorian hero is superior to Dracula’s mindless female brides, but he’ll never submit to Dracula’s evil gay wiles because he’s loyal to his fiancée. Revolutionary stuff!

This is a fairly direct interpretation of the psychosexual subtext in the novel—Dracula as an alien aggressor, breaking up a wholesome English marriage and messing with Harker’s head—but in this version, you don’t really get a sense of Dracula’s seductive appeal. In some scenes, he’s more like a prankster than a sadist, and he barely has any chemistry with his victims. There’s more quasi-erotic tension in a single scene of Hannibal than in the entirety of Dracula’s first two episodes, which seem more concerned with rehashing Sherlock’s success than being scary, or sexy, or examining the deeper themes of Bram Stoker’s novel. Which is rather amusing in the case of the Dracula/Harker scenes, because Sherlock – whose two protagonists were platonic friends – is positively infamous for its queer undertones.

If you’ve seen Sherlock, it’s impossible to avoid making these comparisons. With a weak script and a surprisingly unmemorable villain, Dracula is Gatiss and Moffat’s equivalent of Joss Whedon delivering Dollhouse after Buffy, or Aaron Sorkin trying to recapture the magic of The West Wing with Studio 60 and The Newsroom. It relies on a slew of familiar tropes and tricks, with less effect than before. Snappy one-liners? Check. At least five twists or supposedly-shocking revelations per episode? Check. Weirdly hollow flirtatious banter? Oh boy, check. There’s enough fodder for a drinking game if you’re watching with friends, but as a straightforward, feature-length Dracula adaptation, it doesn’t have much going for it. If not for the genuinely wild ending of episode 2, I wouldn’t even bother watching the finale. But that’s Moffat and Gatiss for you. They always suck you back in, “suck” being the operative word here, in more ways than one.

Dracula arrives on US Netflix on Jan. 4.