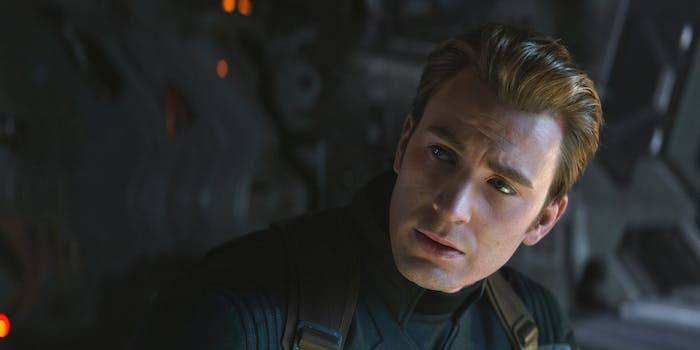 Marvel's obsession with straight romance is why several characters wound up with clumsy endings.

Avengers: Endgame may be the straightest Marvel movie to date—an impressive feat considering the amount of attention paid to its blink-and-you’ll-miss-it gay cameo.

It’s not exactly news that the MCU is dominated by straight, white men, both on-screen and off. By focusing on the original Avengers team, Endgame highlighted the lack of diversity in Marvel’s earlier years —and illustrated how queer storytelling is more complicated than just showing (or not showing) a gay character on-screen. Basically, this film’s conception of a “happy ending“ is so rooted in heteronormativity that it ruined the final act for several key characters.

For most of the Avengers, Endgame’s conclusion was as much about embracing a conventional nuclear family as it was about defeating Thanos. Tony Stark dies, but not before settling down as a husband and father. Steve Rogers goes back in time and marries Peggy Carter, an idea that makes no emotional sense for reasons I’ll explain in a moment. Hawkeye returns peacefully to his family after spending five years on a killing spree. Ant-Man and the Wasp curl up with his now-teenage daughter.

Meanwhile, Thor (who doesn’t have a girlfriend) ends his rather downbeat arc by ceding his crown to Valkyrie. Rhodey and Bruce, our other two bachelors, don’t really get endings of their own, focusing instead on their grief for Tony. Black Widow, as many fans have pointed out, doesn’t get a proper send-off.

For Black Widow (and the film’s other female lead, Nebula), there’s an argument to be made that Endgame’s writers can’t handle a happy ending for a woman without heterosexual romance. Natasha Romanov probably died because Scarlett Johansson wants to leave the franchise after her solo movie, but the way Endgame handled her departure was disappointing. Following a lifetime of physical and emotional abuse, both she and Nebula end up killing themselves for the greater good.

Thanks to being written by multiple writers over multiple films, Black Widow has an uneven role in the MCU. Captain America: The Winter Soldier is probably her best movie, portraying her as a veteran spy with a dry sense of humor. Age of Ultron is her worst, with Joss Whedon introducing the wildly sexist idea that Natasha sees herself as a monster because she’s infertile, and therefore she can’t have a relationship with Bruce Banner. This subplot arrived at the same time as Hawkeye’s thinly characterized family, whose main role was to reboot Clint Barton as an everyman dad.

As critic Clarkisha Kent points out in this excellent Twitter thread, Natasha’s inability to have children foreshadowed her expendability in Endgame. Natasha sacrifices herself so Hawkeye can return to his family, an idea that has no emotional reward because we don’t know Hawkeye’s family.

Unlike Pepper Potts or Ant-Man’s daughter Cassie, who have memorable roles, Hawkeye’s wife and kids are cardboard cutouts who get fridged so he can have a homicidal makeover. While the other (childless) Avengers respond to Thanos’ Snap on a macro level, Hawkeye’s reaction is keenly personal and much more extreme: he becomes a serial killer. Yet instead of setting him up for redemption (ie. by sacrificing himself on Vormir), we’re expected to forget this killing spree once he reunites with his family. Like most of the happy endings in Endgame, this reunion is viewed from the man’s perspective, with wives and children providing solace after men return from battle.

Despite the film’s celebration of friendship and teamwork, its ending downplays the role of “found family” relationships. The Avengers are the closest thing Natasha has to a family, and Steve Rogers’ most enduring relationship is with Bucky Barnes, but these don’t fit into a heteronormative image of a family, so Endgame erases them.

While there aren’t any openly LGBTQ Avengers, the MCU full of queer subtext that fans have discussed for years. Valkyrie is clearly bisexual. Captain Marvel and her friend Maria can easily be read as a couple. And then there’s Steve Rogers and Bucky Barnes, one of the greatest love stories—platonic or otherwise—in the franchise.

Bucky is the emotional cornerstone of the Captain America trilogy. Each film sees Steve rebel against authority for the sake of Bucky’s wellbeing, escalating from disobeying orders in WWII, to becoming an international fugitive in Civil War. But while this intense friendship coexists easily with Steve and Peggy’s romance in the first two movies, things go off the rails after The Winter Soldier. From then on, Marvel gets antsy about giving Steve and Bucky too much screentime together. Civil War gave Steve an unconvincing new love-interest, and the last two Avengers movies take pains to keep him and Bucky apart, avoiding the kind of crowd-pleasing reunion we see between characters with much less personal history.

Steve/Bucky is the most popular ship in MCU fandom, something that’s reached the mainstream conversation around these movies. In response, Endgame feels like Marvel attempting to no-homo its way out of Steve and Bucky’s image as a romantic couple. It’s the narrative equivalent of that “two bros chillin’ in a hot tub, five feet apart cuz they’re not gay” meme. First, Bucky went back into cryostasis after Civil War, removing himself once again from Steve’s life. Then Infinity War kept them apart, followed by Endgame emphasizing Steve’s old love for Peggy. This culminates in a sequence where Steve barely acknowledges Bucky’s return from the dead, and then abandons him with no warning to start a new life in the past.

Steve’s marriage to Peggy is meant to be a satisfying conclusion, allowing Chris Evans to gracefully bow out of the franchise. But in addition to making no sense (the writers and directors can’t even agree on whether Steve ends up in an alternate universe or stays in the same timeline), this ending obliterates years of character development. It’s a great example of how heteronormative expectations can hurt a story. Canonically, Steve and Bucky are straight. Yet they’re not perceived as straight enough until Steve breaks off his friendship with Bucky, and returns to a woman he kissed five movies ago.

In a post-film interview, Endgame’s writers framed Peggy as a reward Steve deserved after years of toil. By contrast, they describe Steve and Bucky as being “healthy” enough to “move on” from each other after Endgame, as if that’s something either character would want or need. Steve’s desire to reunite with Bucky is one of the main driving forces of his life. Meanwhile, in The Winter Soldier, it’s Peggy who Steve needs to move on from. Their love story was cut short by circumstance, but Peggy ultimately built a life for herself, married someone else, and had kids.

As one of the most beloved women in the MCU, fans always responded to Peggy’s independence, which is why it’s so dispiriting to see her become the silent receptacle for Steve’s happy ending. We’re also expected to believe that Peggy would marry Future Steve (a near-stranger) while her own Steve is still frozen in the Arctic ice… and that Future Steve would abandon “his” Bucky in 2023. This epilogue erases much of Steve’s personal journey, removes Peggy Carter’s agency, and destroys any chance of closure for Steve and Bucky.

The idea that Marvel intentionally mothballed Steve and Bucky’s relationship is a conspiracy theory, but it’s a conspiracy theory I can easily believe. When fans pick up on queer subtext in this kind of media property, creators often react by trying to dial things back, either by marrying off one of the characters or by separating them. The problem is, Steve and Bucky’s friendship is the lynchpin of their franchise. If you try to tone it down to avoid gay subtext, you’re shooting your own story in the foot.

At the very least, writers Christopher Markus and Stephen McFeely misunderstood the arc they set up in earlier films. The result is a clash between their desire for a heteronormative ending and the reality of the queer-coded friendship between Steve and Bucky. As Rotem Rusak points out in the comics blog Bam Smack Pow, Bucky already fulfilled the love interest role in Steve’s narrative, repeatedly cast as a vulnerable figure at the center of Steve’s emotional universe. After creating this compelling love story in earlier films, Markus and McFeely tripped over themselves trying to downplay Bucky’s importance in Endgame. “There is such a deep intimacy between Steve and Bucky,” writes Rusak. “Such a powerful love and an intensity of loss, that if they are together, they must express it, and that expression is taboo. For the fans to like it, is taboo. And the only way to deal with it is to separate them.“

So in the end, enforced straightness won out, regardless of whether it made sense for any of the characters involved.

When fans campaign for queer representation, a common response is that queer characters shouldn’t be “forced” into stories “for no reason.” Conservatives argue that franchises like Marvel shouldn’t just introduce queer characters “for the sake of it.” Obviously, that’s nonsense, but if we ever needed an example of romance and sexuality being forced unnaturally into an existing story, it’s Avengers: Endgame. Obsessed with traditional family values, this film derailed several of its main character arcs to make way for incoherent and offensive endings.