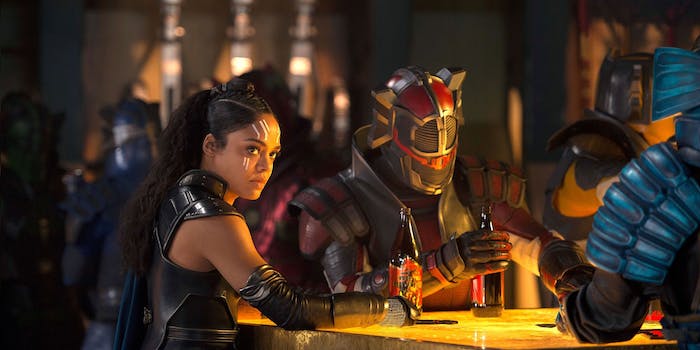 The scene involved a woman walking out of Valkyrie's bedroom.

Valkyrie’s sexuality has become quite a saga in the lead up to Thor: Ragnarok.

First, actress Tessa Thompson tweeted that Valkyrie is bisexual, making her the first canonically queer character in a Marvel movie. Then, she clarified that while her performance is faithful to the comics, Valkyrie’s sexuality isn’t addressed onscreen.

In a new interview with Rolling Stone, Thompson returned with a further update. Apparently, she filmed a scene where Valkyrie hooked up with a woman, but it wound up getting cut from the movie.

Thompson is a big fan of Valkyrie and her love interest Annabelle Riggs in the comics and wanted to stay true to the character’s sexuality onscreen. She asked director Taika Waititi to film a moment where a woman walks out of Valkyrie’s bedroom, hinting that they slept together. According to Rolling Stone, Waititi “kept it in the film as long as he could,” but the shot eventually got cut because it “distracted” from the scene’s primary purpose.

Since Waititi encouraged the cast to improvise, plenty of other material ended up on the cutting room floor. But it’s especially sad to see this detail get deleted because it could’ve been a watershed moment for Marvel. Like the infamous “exclusively gay moment” in Beauty and the Beast, Thompson’s tweets got people excited about the prospect of queer representation. The problem is that by mentioning it publicly, Thompson drew attention to the fact that Marvel decided not to include the scene after all.

In the same interview, Thompson mentions a scene that is more open to interpretation. It’s a flashback where Hela (Cate Blanchett) kills another of Asgard’s female warriors, and we see Valkyrie react with grief and rage. “In my mind, that was my lover,” said Thompson. For what it’s worth, that’s how I viewed that scene when I watched the movie, too.