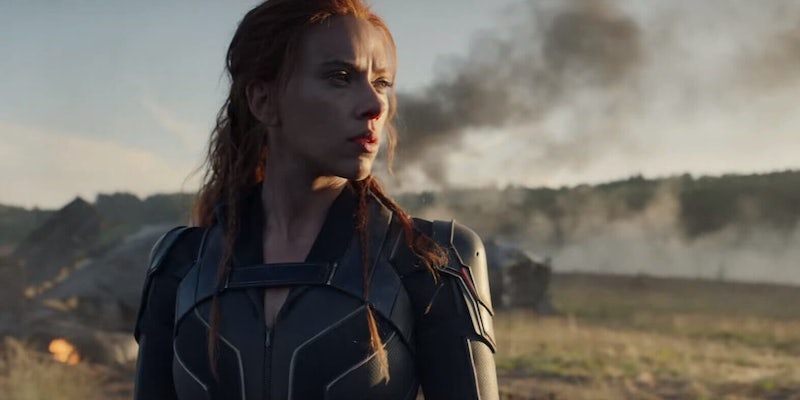 It's a 'Bourne Identity'-style espionage thriller.

Ever since Scarlett Johansson made her Marvel debut in Iron Man 2, fans have clamored for a Black Widow movie. It’s been a long wait, but after seven movies as a supporting character, Natasha Romanoff is finally getting her own solo film. An espionage thriller co-starring Rachel Weisz and Midsommar actress Florence Pugh, the self-titled Black Widow will delve into Natasha’s untold backstory.

The first trailer arrived on Dec. 3, opening with a shot of Budapest, a significant (yet still mysterious!) location from Natasha’s past. Taking place during the two-year period between Captain America: Civil War and Avengers: Infinity War, it sees her reunite with Yelena Belova (another woman from the Black Widow program, played by Florence Pugh), Russian super-soldier Red Guardian (Stranger Things star David Harbour), and another more enigmatic Black Widow (Rachel Weisz). The trailer has a kind of Bourne Identity vibe overall, which is exactly what we’d hope to see for the character.

Here’s everything we know about the Black Widow movie so far.

Black Widow will come out on May 1, 2020, slotting into the MCU‘s release schedule as the first film of Phase 4. The next will be The Eternals on Nov. 6, an entirely new franchise.

Jac Schaeffer and Ned Benson (The Disappearance of Eleanor Rigby) co-wrote the script, with Cate Shortland directing. Schaeffer is best known for writing and directing the sci-fi romcom TiMER, an excellent low-budget movie about a gadget that tells people when they’ll meet their soulmate. Shortland has three films under her belt, including the thriller Berlin Syndrome. The film’s costume designer is Jany Temime (Skyfall, Spectre), with other behind-the-scenes creative roles still under wraps.

Scarlett Johansson is joined by Florence Pugh, whose profile is rapidly rising after starring in the BBC spy thriller The Little Drummer Girl, Midsommar, and the new Little Women adaptation this year. Her character, Yelena Belova, has a significant role in Black Widow’s comic book backstory, another spy who was trained by the Red Room, and acts as a kind of sister figure to Natasha Romanoff.

Stranger Things and Hellboy star David Harbour will play a version of the Russian counterpart to Captain America, Alexei Shostakov (aka Red Guardian), introduced in the trailer as a former super-soldier who has since gone to seed. Academy Award winner Rachel Weisz (The Favourite) plays another graduate of the Black Widow program, and British actors Ray Winstone and O-T Fagbenle have roles in the supporting cast. Now confirmed in the trailer, the movie will also feature another (male) superhero/villain character, a masked figure who uses a bow and arrow. Fandom speculation suggests he’s probably Taskmaster.

Since Black Widow died in Avengers: Endgame, that obviously rules out a story set in the present day. Instead we skip back to the two-year period between Captain America: Civil War and Avengers: Infinity War, with Black Widow going solo to mop up some unfinished business with her upbringing among the Red Room organization.

It will be interesting to see how the movie reworks her origin story, which had an obvious Soviet/Cold War background in the comics. In the MCU, Natasha Romanoff was ostensibly born in the mid-1980s, meaning she wouldn’t have been active as a Red Room operative – even as a kid – until the mid-to-late ’90s. So, definitely after the Cold War. However, the movies also mention that she was in the KGB, which (in the real world) disbanded in 1991, leaving us with a few different explanations: either Marvel’s screenwriters have a dubious grasp of Soviet history, the MCU has a different political timeline to our own, or Black Widow is much older than she looks – which is actually supported by the comics, where she’s sometimes portrayed as having superhuman longevity.

The Dec. 3 teaser is our first real look at the movie, with a full-length trailer expected to arrive in the coming months.