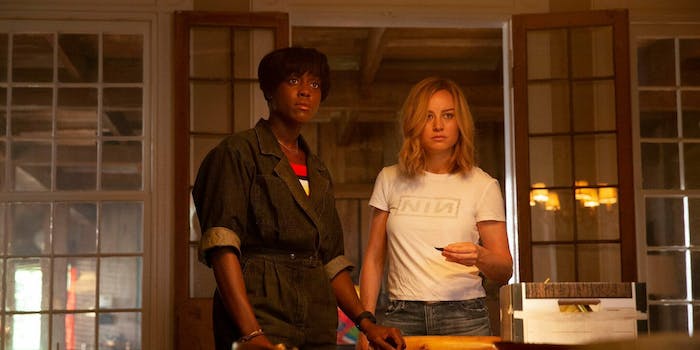 Are Carol and Maria the Steve and Bucky of ‘Captain Marvel’?

Brie Larson says that Carol Danvers and her friend Maria Rambeau are 'the great love' of the movie.

At a recent press conference, Brie Larson talked up the “tight-knit bond” between Carol and Maria. The two characters went through military training together and were the only two women in their group, but Larson thinks they would have become friends even without that experience. “This is the love of the movie,” she said.

(The daughter is, of course, Monica Rambeau, who presumably grows up to be the superhero known as Photon, Pulsar and Captain Marvel in the comics.)

It sounds like Carol and Maria are Captain Marvel’s version of Steve Rogers and Bucky Barnes, one of the most compelling relationships in the Marvel franchise. Not only are they best friends, but like Steve and Bucky, they’re also tragically separated by circumstance. The trailers suggest that while Carol Danvers starts off as an Air Force pilot, she becomes a superhero on another planet and loses her memories of Earth. Maria Rambeau may be her emotional connection to home, which is doubly intriguing when you consider the setting of Carol’s next movie, Avengers: Endgame. While Captain Marvel takes place in the ’90s, Endgame is set in the present day, so we may see Carol reconnect with an older version of Maria.

Female friendships are not exactly a common theme in superhero movies. In fact, it’s still notable when a superhero movie manages to pass the Bechdel Test or include major female characters who aren’t a love interest or a mom. It doesn’t help that most of these films are written and directed by men, based on decades-old comics that were also created by men.

Until now, Marvel’s most memorable example of female friendship was Jane Foster and Darcy Lewis in the first two Thor movies, a friendship that turned Darcy into a cult figure in MCU fandom (seriously, she’s in over 15,000 fanfics) but was forgotten by the rest of the franchise. Wonder Woman obviously includes several key relationships between women (thanks, Themiscyra) and the upcoming Birds of Prey movie features an all-female superhero team, but it’s still early days. It’s exciting to see Captain Marvel put Carol and Maria’s bond at the heart of the film, and we look forward to fans inevitably shipping them together.