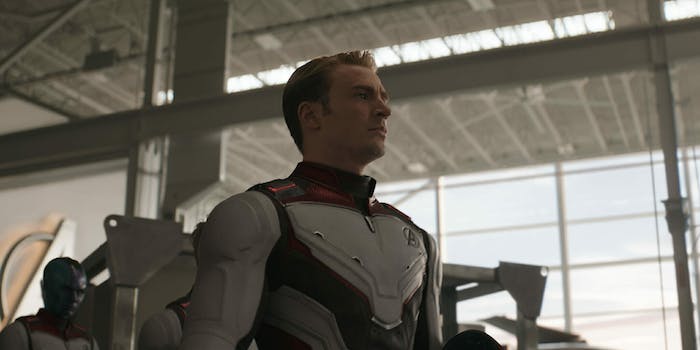 The end of ‘Avengers: Endgame’ makes no sense

The final act just created a new disaster for the Marvel universe.

Sci-fi media encourages a high tolerance for nonsensical time-travel hijinks. Most time-travel stories don’t stand up to logical scrutiny, but as long as they feel right, you’re golden. This attitude served me well for the first three quarters of Avengers: Endgame, but once we reached the final act, there was no ignoring it: This movie makes no damn sense.

Endgame’s big finale resets the end of Infinity War. After regaining the Infinity Stones, the Avengers reverse Thanos’ finger-snap and bring back everyone who got dusted. That’s basically what fans predicted, with one key problem: Everyone comes back five years after they “died,” materializing in 2023.

This time-jump happens for Tony Stark’s benefit because he doesn’t want to erase the existence of his daughter Morgan. It’s a truly bonkers “needs of the many vs. needs of the few” dilemma because a) Tony prevents the Avengers from erasing five years of grief and trauma for everyone else in the universe, and b) couldn’t they just… bring Morgan with them somehow? Like, give her a toddler-sized time suit or something? Anyway, this resolution sets up a disastrous scenario that can’t be fully acknowledged in later movies. Namely, the fact that Earth isn’t remotely prepared for 3 billion people to reappear without warning and restart their lives as if nothing happened.

Earth is totally screwed after Endgame

On a basic infrastructural level, Earth can no longer feed this many people. Their jobs are gone, their homes are in disarray, and their relatives have either died or moved on in the intervening years. Either way, the dust-ees returned to an apocalyptic society where numerous world governments probably collapsed five years ago. Even in terms of the Avengers’ happy endings, this is a massively screwed-up situation. Ant-Man missed seeing his daughter grow up, and Hawkeye’s family was reunited with a vigilante serial killer with a full-sleeve tattoo of a zombie samurai.

Endgame’s time-jump created immeasurable complications for future storytellers in the MCU, starting with Spider-Man: Far From Home in July. According to Marvel producer Kevin Feige, this movie tackles the question, “What is it like to try to go back to a normal life after what happens in [Infinity War]?” Conveniently, all of Peter’s friends also got dusted, so they’re still the same age as Peter in 2023. However, Far From Home now takes place in a world where their friends and family think they’ve been dead for five years, and half their peers are now in their early twenties. Marvel’s other ongoing franchises face similar issues—and that’s before we get into the specific problem of Captain America’s ending.

Cap’s epilogue is controversial for emotional and logistical reasons. Giving Steve Rogers a life with Peggy Carter is ostensibly a happy ending, but it (maybe) erases the events of the TV series Agent Carter and sidelines Steve’s character development in Captain America: The Winter Soldier, which saw him move on to a new life in the 21st century. It also has a surprisingly grim subtext: Steve Rogers chooses to stop fighting (a highly uncharacteristic move), turn back the clock, and retire to a quiet life in the 1940s. In order to preserve the timeline, this requires him to ignore Bucky being tortured by Hydra for 70 years. Actually, it’s hard to see how they preserve the original timeline at all.

In theory, Peggy could secretly have been married to Steve all along, but… Steve Rogers is pretty recognizable, and people would notice that Peggy’s husband looks exactly like her long-lost love Captain America. Also, it’s hard to imagine Steve quietly living through the 20th century and not interfering in world events. So either Steve and Peggy created a radically different new timeline, or Cap’s ending makes no sense.

Endgame’s writers did the best they could to give him a satisfying epilogue, presumably because they couldn’t give big death scenes to both him and Tony Stark.

This frustrating conclusion fits with Endgame’s role as a live-action comic book crossover event. Like The Winter Soldier and Civil War, it involves massive stakes with wide-reaching consequences. And if we go by the example of previous movies, this may have surprisingly little impact on later installments. Despite the five-year time jump, it looks like Spider-Man: Far From Home will follow the first film’s lighthearted tone. Other continuing franchises will have to find ways to handle the fallout without drawing focus from their main stories, particularly Black Panther (where Wakanda continued without T’Challa for five years) and the upcoming TV shows for Hawkeye, the Winter Soldier, and Falcon.

Fortunately, comics fans have lots of practice at handwaving this kind of messy crossover event fallout. And if you’re still annoyed by the endings for characters like Captain America, well, that’s why we have fanfiction.