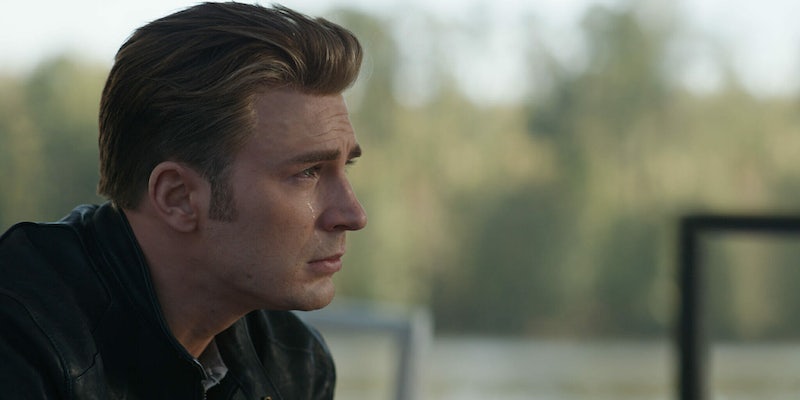 Where did Steve Rogers go?

Avengers: Endgame directors Joe and Anthony Russo have an explanation for Captain America’s ending—which is just as well because what we see on-screen doesn’t really make sense.

At the end of the movie, Steve Rogers travels back in time from the present day (2023) to return the Infinity Stones to their original locations. Then instead of reappearing where he left, he goes back to the 1940s where he reunites with Peggy Carter and lives a long life with her. On the surface that’s a happy ending, but it also plays merry hell with the MCU timeline—not to mention erasing Peggy’s original life (and family) so Steve can get a second chance. Screenwriter Stephen McFeely said that Steve “earned” this epilogue, a view that reduces Peggy from a protagonist in her own right to the heteronormative prize at the end of Steve’s story. (One also wonders how he explained the fact that he made out with Peggy’s niece.)

Emotional critiques aside, this scene only makes sense if Steve created a new timeline, radically changing history after he returns to the 1940s. That fits with the film’s earlier explanation of time travel, where the Ancient One (Tilda Swinton) illustrates how branching timelines are created. The problem is, the film doesn’t confirm that’s what happened with Steve. He just reappears at the end as an old man, with no explanation for how he got there, and no visual cues like a time suit or Pym particles. The way this scene is shot and edited makes it confusingly unclear whether Old Steve just arrived from living 80 years in a separate timeline, or if he was there in the original universe all along. In fact, it literally shows Old Steve waiting to meet with Sam and Bucky, not arriving from elsewhere.

Joe Russo acknowledged this conundrum in an interview with Entertainment Weekly. “If Cap were to go back into the past and live there, he would create a branched reality,” he said. “The question then becomes, how is he back in this reality to give the shield away?” In other words, Steve Rogers did create a new reality. And then he came back 80 years later to say goodbye.

Did Endgame create a new timeline with two Captain Americas?

We see Steve reunite with Peggy Carter in the 1940s, after which we’re led to assume they got married. Decades later, Old Steve (somehow) returned to the original Endgame universe in 2023 so he could give his shield to Sam Wilson. This answers our initial questions, but introduces a bizarre new detail: The new timeline seems to have two Steve Rogers in it.

Endgame implies that 2023-era Steve Rogers (Steve 1) simply returned to the 1940s, at which point his timeline diverged from the main MCU. In this new universe, Steve 1 marries Peggy. However, this universe presumably contains a Steve Rogers already: Steve 2. And in 1945, Steve 2 is frozen in the Arctic Ice. So while we can imagine a happy new timeline where Steve 1 marries Peggy and presumably rescues Bucky from Hydra, Steve 2 is still… somewhere out there. Do these two Captain Americas wind up in a love triangle with Peggy? Does one of them get together with Bucky, thus satisfying the two biggest ships in the franchise? Surely Steve 1 doesn’t just leave Steve 2 in the ice, anyway.

Did Bucky know all along?

Along with the confusing nature of Cap’s ending, many fans were perturbed by the minimal screentime he shared with Bucky. Their relationship is the cornerstone of the Captain America franchise, so it was weird to see them say goodbye without a real conversation. Well, it turns out there’s an offscreen explanation for this too. In the same EW interview, Joe Russo hinted that Bucky already knew about Steve’s plan to stay in the past.

“Clearly he knows something,” said Russo, referring to the scene where Bucky bids farewell to Steve. By contrast: “Sam doesn’t know something.”

So, are we meant to believe that Bucky had already met Old Steve, perhaps in a scene that didn’t make it to the final cut? Or did Steve tell him about his plan before leaving? It could be something that gets a proper explanation in the upcoming Falcon and the Winter Soldier TV show.

The Russos have answered the two big questions about Captain America’s ending, but the fact that it needed explaining is arguably a problem in itself. While Endgame offered some explicit time-travel exposition in earlier scenes, Captain America’s epilogue still confused a lot of viewers. The film doesn’t actually tell us where Steve went or how he got back. It leaves audiences to assume that he created a new timeline, and then somehow traveled back for a two-minute scene 80 years later. This wouldn’t be such a problem if Steve’s ending felt right on an emotional level, but considering the complicated nature of his relationship with Peggy—and the fact that he and Bucky never got a proper send-off—it’s no wonder that fans are picking that scene apart.