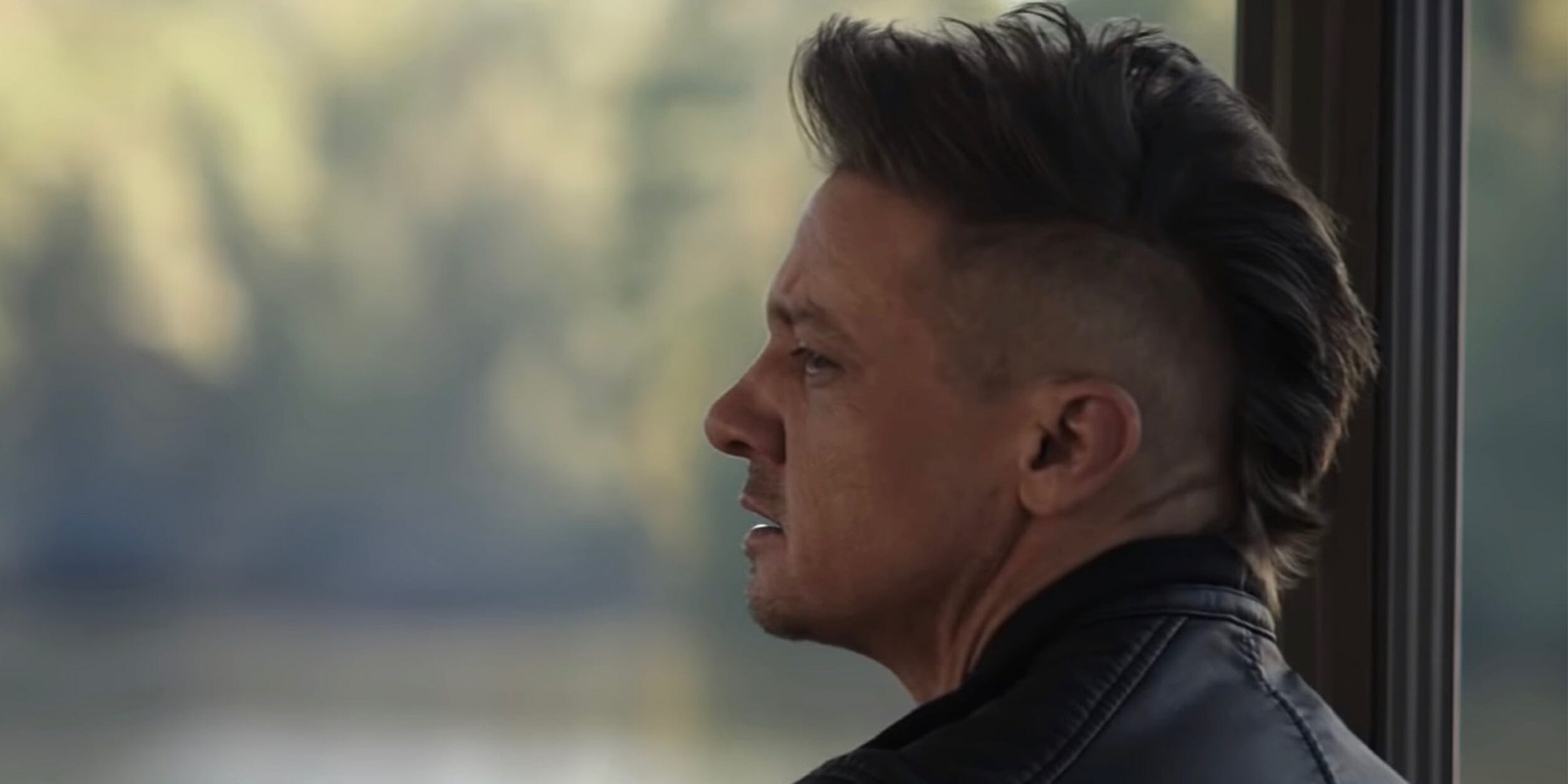 He's got a lot on his shoulders.

Clint Barton (aka Hawkeye) was conspicuously missing from Avengers: Infinity War because he, like Scott Lang, accepted a plea deal after Captain America: Civil War and was under house arrest during the film. But now he’s right back in the action in the latest trailer for Avengers: Endgame, which is leading to even more questions.

We already caught a glimpse of him in the first trailer looking dramatically different than we’re used to seeing him. He had the sides of his hair buzzed while keeping it longer on top. Hawkeye’s bow and quiver are gone; instead, he’s wielding a blade in the rain.

The newest trailer showed us a slightly different variation of that scene, but we also got a lot more Hawkeye, including a new look at his hair both literally high and dry. Naturally, it’s already leading to plenty of jokes, including one that implicated Thanos’ role in making part of that disappear.

Wow, Thanos snapped half of Hawkeye’s hair too… #AvengersEndgame pic.twitter.com/mfz6JkjWzx

Is Hawkeye simply going through a midlife crisis? It’s always possible! But if that’s the case, it’s also very likely that there’s much more going on beneath the surface.

Who is learning to shoot with a bow from Clint?

In the Endgame trailer, a pre-mohawk Clint is seen teaching a young girl how to shoot with a bow and arrow. We don’t get a good look at her face, so it’s hard to say exactly who this girl is supposed to be, although we have a couple of ideas.

It could potentially be Clint’s daughter Lila. His daughter, who is introduced in Avengers: Age of Ultron and had already taken a shining to Natasha Romanoff might want to take up her father’s bow and arrow. If this scene takes place either before or around Thanos’ snap from Infinity War, two years will have passed since then. If it’s not Lila, Clint could have taken a different apprentice under his wing. In the Marvel comics, another character named Kate Bishop took up the mantle of Hawkeye after Clint died; as is common in comics, Clint later came back to life.

It’s possible that a young woman, who may know who Hawkeye is now, stopped by for archery lessons from none other than Clint Barton himself.

By the time we see Clint again, it’s clear that he’s gone through some shit. On top of being on house arrest, Clint decided to retire after Civil War so he could spend more time with his wife Laura and their children. But in Endgame, he’s gone full vigilante before re-teaming with the Avengers.

The trailer doesn’t reveal much, but the juxtaposition between the flashback of Hawkeye and the woman he’s teaching to shoot an arrow and him on the streets of a Japanese city in the rain suggest one possibility. We know that Clint survived Thanos’ snap because he’s still here to fight, but we have no indication that any of the Bartons made it out alive.

Although we tend to frown upon fridging, losing his entire family to Thanos would be enough for a former superhero to go rogue.

If you’ve spent enough time analyzing Endgame trailers, you might have heard of the name Ronin. It’s not the name of a new superhero, a Captain Marvel character, or one of Thanos’ cohorts, but rather an alias that at one point in the comics, Clint takes for himself.

Clint took up the mantle of Ronin, which was first donned by Maya Lopez (who’s also known as Echo) after he’s brought back to life and in the aftermath of the Civil War comic book event. At that point, Kate Bishop had taken his title, so he forged his own way for a while.

In Endgame, Clint shedding his identity as Hawkeye and adapting a new hero might be a way for him to cope with the loss of his family. With nothing left to lose or fight for, he’s taking a more extreme approach than what he was used to, at least until Natasha finds him again.

And what about that haircut?

During his tenure as Ronin, Clint made it a point to keep his identity hidden even from the other superheroes he fought alongside. That probably won’t be the case in Endgame given how much of Clint’s face we’re already seeing, as well as him walking alongside his fellow Avengers in a new uniform.

His hair could signify a couple of things. One, that in the likely event that he lost his entire family to Thanos’ snap, Clint went for a dramatic change or wanted to make himself completely unrecognizable from the superhero we’ve gotten to know for nearly a decade. So when he operates as Ronin, he can’t be tied to Hawkeye even without the mask on his face. But within the trailer itself, the length of Clint’s mohawk appears to change, which could point to another key part of Endgame: that there’s a time jump.

We saw this most prominently with the length and color of Natasha’s hair (which appears both as a blonde bob and a red braid with only a tinge of blonde), but we could also see it with Clint’s hair too. While other heroes might keep their hair neat, or even shave a beard, Clint just might let his hair grow wild.

Although most of the Avengers have lost someone close to them, Clint had more on the line than most. And chances are, he’s gonna be in the thick of it to make things right—goofy haircut and all.