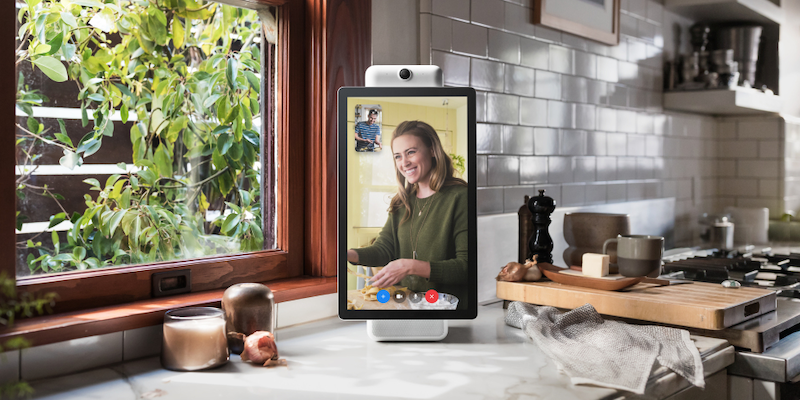 This is Facebook’s first piece of hardware, Portal

Are you ready for a Facebook device to live in your home?

Facebook’s first-ever hardware product is Portal, an Alexa-powered smart speaker with a screen for video chatting.

And video chatting is certainly one of its key features. According to Facebook, Portal “makes video calling easier and more like hanging out.” In some ways, the device is a lot like other smart displays, but it has some artificial intelligence, security features, and Facebook integrations (naturally) that set it apart from competitors. Here’s everything you need to know about Facebook’s Portal.

Facebook’s Portal looks reminiscent of an Amazon Echo Show, with a 10-inch 1,280 x 800 (720p) resolution display and a speaker grille below. Situated above the display is a “Smart Camera,” which uses AI to automatically track action that it’s transmitting via video. This includes panning and zooming to keep individuals within the frame. The device also includes a four-mic array for noise cancellation to minimize background audio and enhance the voice of the speaker.

How do you use Portal?

Of course, this is a product from Facebook, so it’s call-making functionality is Facebook-specific. You can use the device to video chat with friends on Facebook or Messenger. The recipient doesn’t need to have a Portal. Calls can be made between smartphones and tablets with Messenger installed. You can make a call with up to seven people.

Portal is Alexa-enabled so it can handle all the normal requests you’d use an Alexa device for. However, you use “Hey Portal” as the smart speaker’s wake word, rather than “Alexa,” and when you tell Portal to call someone, it does so over Facebook Messenger, rather than a different service.

You can use its screen (and speakers) for more than just video calls, though. You can listen to Spotify Premium, Pandora, or iHeartRadio. You can also watch content from Facebook Watch, Food Network, Newsy, and even Netflix, Showtime, and Amazon Prime. Users can even access other popular video calling apps such as Zoom, BlueJeans, and Webex Meetings.

The device also has a Story Time feature that uses augmented reality to animate whoever is on screen with visual and sound effects. You can read a story via a teleprompter onscreen, and video recipients on the other end see an AR version where your image and sound transform along with the story’s characters.

When the screen isn’t in use, it can display photos and videos. It’ll also surface important (Facebook) notifications such as birthday reminders.

Naturally, there are privacy concerns with the devices, particularly considering the Facebook data breach that made 50 million users’ data vulnerable. Facebook, which has been working on the device for about two years, has addressed some key issues. You can disable Portal’s mic and camera with a tap—it even comes with a camera cover so you can completely cover the camera lens. (If you cover the lens, you’ll still be able to make or receive voice calls and other smart speaker functions.) You can also set up a four- to 12-digit passcode to lock or unlock the screen. The device itself is tied to your Facebook account though, so you’ll need to enter your Facebook password to change this code.

Facebook says that it “doesn’t listen to, view, or keep the contents of your Portal video calls. Your Portal conversations stay between you and the people you’re calling.” It also only sends voice commands to Facebook’s servers after you’ve said the wake word, “Hey Portal.” Like with Amazon’s Alexa, you can delete your voice history, but as this is Facebook, you have to do so by visiting your Facebook Activity Log.

In addition, video calls on Portal are encrypted and the device’s Smart Camera and Smart Sound features run locally on the hardware, rather than being sent to Facebook’s servers. The device does not have facial recognition.

Facebook also has a larger version, the Portal+. This has a 15-inch rotating display that can sit in portrait or landscape mode and has full 1080p (1,920 x 1,080) pixel resolution. The onboard 12-megapixel Smart Camera, same as on the Portal, includes an 8X zoom and 140-degree field of vision. For audio, it has a pair of tweeters and a four-inch woofer. That’s a step above the two full-range drivers in the smaller Portal.

For those interested in smaller devices, Facebook also offers the Portal Mini. With an 8-inch HD screen, the Portal Mini offers all the same features as the original Portal in a compact package. The device comes with a 13-megapixel Smart Camera that allows for a 114-degree field of vision as well as front-porting stereo speakers and a rear woofer.

What do users and critics say?

Based on reviews online, users overall agree that the Portal is an excellent product for those looking to make video calls, especially with Facebook Messenger or WhatsApp. And although one popular critique is the lack of quality in Facebook’s voice assistant, Portal remedies this by allowing users to use Amazon’s more advanced Alexa instead.

The device’s picture quality, sound quality, and the ability to automatically follow and focus in on users as they speak has also received high praise.

Facebook’s biggest hurdle for the Portal’s mass-adoption is the company’s public image, particularly concerning issues related to privacy. As previously noted, Facebook has made an effort to quell such concerns by allowing users to disable their camera and microphone when the device is not in use. Whether Portal will continue to be popular may depend largely on Facebook’s ability to steer clear of privacy scandals moving forward.

Is it useful for the coronavirus pandemic?

The ongoing coronavirus pandemic, according to Facebook, has led to a surge in Portal ownership. A device that some felt was only useful for conference calls in a business environment has found its way into a growing number of homes as users find themselves working remotely. Not only that, Portal has also proved useful with its growing number of features for those looking to keep in touch with family while social distancing. Citing the device’s easy setup and simple interface, many users have reportedly purchased the device for elderly family members as well.

Facebook Portal is currently available for $179. The larger Portal+ can be purchased for $279, while the Portal Mini comes in at $129.

The devices can be purchased directly from Facebook as well as major online retailers including Amazon and Best Buy.