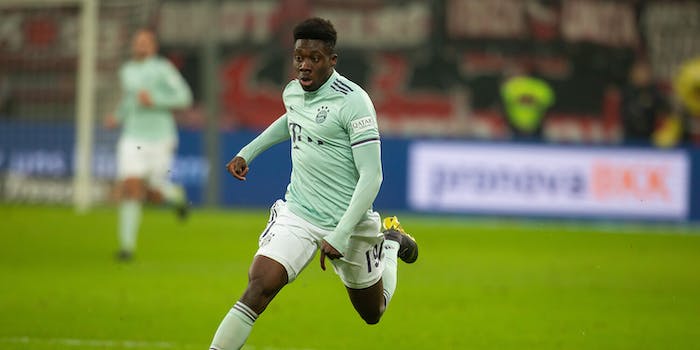 How to stream Tottenham Hotspur vs. Bayern Munich in Champions League action

Spurs and Bayern will clash in a marquee Champions League match on Tuesday.

How is it that a Champions League finalist from last year is an underdog in its second group stage match? When you’re Tottenham Hotspur, going through a bit of a rough patch, and facing a Bayern Munich built for boat-racing the Bundesliga and going deep into Champions League, what you did last year goes out the window. That said, it hasn’t been as smooth sailing as usual for Bayern in its domestic league. The defending champs are still undefeated through six matches, but barely ahead of a whole group of contenders for what could be the most exciting title race in years.

Against that backdrop, the two clubs meet Tuesday in London for what could be one of the best battles of the whole group stage.

Here’s everything you need to know to live stream Tottenham Hotspur vs. Bayern Munich, including what to watch for on the pitch.

FuboTV is a solid TV streaming service option, whether your tastes run to entertainment (AMC, Syfy, FX), news (MSNBC, CNN), or sports (NBA TV, NFL Network). If you’re a soccer fan, however, it will appear tailor-made for you, with all Champions League matches (via the TNT and TUDN family of channels), NBC and NBCSN, 10 BeIn Sports channels, FS1 and FS2. If you can’t watch a match live, FuboTV offers a three-day replay for each match and 30 hours of cloud DVR. (Check out the complete FuboTV channels list.)

FuboTV also has bilingual families in mind; each subscription comes with UniMás, Galavisión, NBC Universo, BeIn Sports, Univision, and Fox Deportes. An extra $7.99 per month will bring you Latino Plus, which includes CNN en Español and TyC Sports among its offerings.

Spanish-speaking viewers have quite a few options. For bilingual families, you might consider the Español: Best of Spanish TV package for either Sling Orange or Sling Blue for 24/7 specialty channel LaLiga TV and BeIn Sports Connect: Channels 4-9, which features matches from La Liga, Ligue 1 and Copa del Rey, among others. Both packages cost $5 per month after your free trial. Sling TV Latino is another Spanish-language package for $10 per month, including NBC Universo, History en Español, and—of import to soccer fans—four BeIn Sports channels. (And choosing Sling TV Latino + Sling Orange for $30 per month gives you access to ESPN Deportes.) For more information, check out our guide to Sling TV channels and our Sling TV review.

Tottenham Hotspur vs. Bayern Munich: What to watch for

Spurs are still smarting from an embarrassing Carabao Cup ouster to Colchester the week prior, but they shook some of that off over the weekend with a 2-1 home win over Southampton. New midfield revelation Tanguy Ndombele and stalwart striker Harry Kane grabbed first-half goals in the win, even while playing a man down for more than a half thanks to Serge Aurier’s naughtiness.

Bayern’s the same loaded team you’ve known for years, but it’s constantly refreshing the lineup. Over the weekend in a win over Paderborn, Philippe Coutinho (on loan from Barcelona) scored, and Alphonso Davies (who came over from MLS’ Vancouver Whitecaps in a celebrated move announced around this time last year) saw some action. But there are plenty of familiar names on the team still, including Robert Lewandowski (who also scored on the weekend) and mainstays like Manuel Neuer and Thomas Muller.