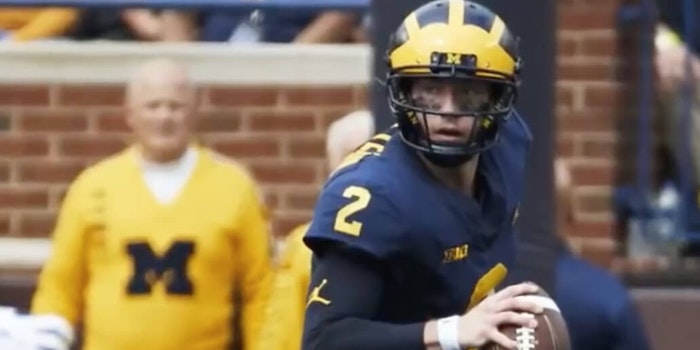 Week 4 brings significant matchups that will have definite College Football Playoff implications. For example, No. 7 Notre Dame travels to No. 3 Georgia for a primetime matchup in between the hedges at Sanford Stadium in Athens. In Big 10 conference play, No. 11 Michigan collides with No. 13 Wisconsin, in something of a redemption game for the visiting 2-0 Wolverines. The Badgers, on the other hand, have outscored their first two opponents (South Florida and Central Michigan) 110-0.

Let’s take a quick look at the difference-making matchups for Week 4: Below are six can’t-miss ball games—along with how to stream them online. Southern California hosts an underrated Utah program after suffering an overtime loss in a classic trap game against BYU last Saturday. Freshman signal-caller Kedon Slovis looked the part of an inexperienced player, throwing three bad picks to Cougars defensive backs. That said, the Utes can’t get themselves in any sort of shootout, given their strengths lie in controlling tempo with the run game which allows their pressure defense to overwhelm.

Air Force’s vaunted triple-option attack gained a combined 444 yards in a win over Colorado and will need to do even more of the same on Albertsons Stadium’s famous blue turf. True freshman QB Hank Bachmeier appears unfazed in succeeding former standout Brett Rypien, passing for 927 yards and four touchdowns in three wins to start the season. The Broncos, who won last year’s 48-38 track meet, have yet to yield any second-half points. Something tells me the academy is going to be competitive through the final whistle.

The Badgers are actually who they’ve long advertised themselves to be: a stout defensive unit with a mauling offensive counterpart, starring Jonathan Taylor as the slicing running back. They outscored their first two opponents 110-0. The Wolverines, though, are still looking to define themselves, especially after a near-loss to Army two weeks ago—where players were visibly shaken by the notion of an academy, running an old-school veer offense, nearly beating them. QB Shea Patterson hasn’t taken that widely expected leap forward in his progress. That jump will need to occur Saturday, or Michigan will be blown out.

Even with Aggie star QB Kellen Mond largely playing like one at the helm, Texas A&M’s run game will be what wins, or loses, against the brawny and fast Auburn defensive front seven. Freshman QB Bo Nix—son of former Auburn great Patrick Nix—has been serviceable and tough, but lacks consistency from the pocket. He went 12-of-16 for 161 yards in the Tigers’ win over Kent State. Jimbo Fisher and A&M, more broadly, need a win to prove their worth within the SEC, especially after not being competitive against the juggernaut that is Clemson.

BYU is going big in hosting the Huskies in yet another nationally televised contest. The Cougars will be going with the white-out uniforms and ’70s-era designs. They will need whatever it takes because the Huskies are coming to paint those whites red. Short the unusual loss to California, which didn’t finish until the early hours Sunday morning in Seattle due to an abnormal weather delay, the Chris Petersen-led program has looked the part of a Pac-12 favorite. New Washington QB Jacob Eason, a transfer from Georgia, looks like a future pro.

Much more than just a contest, Notre Dame’s away date with the Bulldogs is an existential dilemma. Once one of the top few programs in America, it’s still a name-brand program but remains unable to get it done in games that count most. The stark reality is that until head coach Brian Kelly and his staff recruits and develops absolute maulers in the trenches (or at least more than one or two at a time) they will continue to have their seasons upended by physically superior teams, like the top SEC schools and Clemson. They have great skill players and QB Ian Book has moxie and arm talent; however, being chased all game by the Georgia front seven is a surefire way to be demolished in Sanford Stadium.