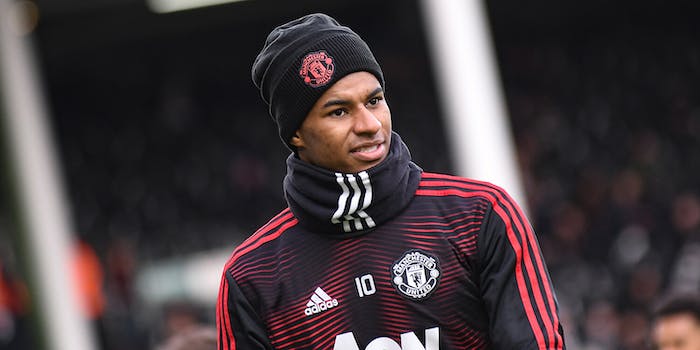 How to stream Manchester United vs. Newcastle

It's a battle of Uniteds, as Man U travels to Newcastle for Sunday's late match.

Manchester United has had a bit of a rough week. On Monday, the hosts took a lead and then gave it back, ending up with a 1-1 draw against rivals (and current Europa League compatriots) Arsenal. Then on Thursday, in that tournament, the Red Devils only managed a scoreless draw with six shots total—and none of them on goal. Though Man U’s 10th in the table and flagging a bit in Europa League, at least it’s not where Newcastle is. The Magpies are currently in relegation-ready 19th place, after losing their last four matches.

Here’s everything you need to know to live stream Manchester United vs. Newcastle, including what to watch for on the pitch.

FuboTV is a solid TV streaming service option, whether your tastes run to entertainment (AMC, Syfy, FX), news (MSNBC, CNN), or sports (NBA TV, NFL Network). If you’re a soccer fan, however, it will appear tailor-made for you, with NBC and NBCSN, 10 beIN SPORTS channels, FS1, FS2, UniMás, and Champions League actions via TNT all on tap. If you can’t watch the Manchester United vs. Newcastle match live, FuboTV offers a three-day replay for each match and 30 hours of cloud DVR. (Check out the complete FuboTV channels list.)

Spanish-speaking viewers have quite a few options to watch the Manchester United vs. Newcastle game. For bilingual families, you might consider the Español: Best of Spanish TV package for either Sling Orange or Sling Blue for 24/7 specialty channel LaLiga TV and beIN SPORTS Connect: Channels 4-9, which features matches from La Liga, Ligue 1 and Copa del Rey, among others. Both packages cost $5 per month after your free trial. Sling TV Latino is another Spanish-language package for $10 per month, including NBC Universo, History en Español, and—of import to soccer fans—four beIN SPORTS channels. (And choosing Sling TV Latino + Sling Orange for $30 per month gives you access to ESPN Deportes.) For more information, check out our guide to Sling TV channels and our Sling TV review.

Manchester United vs. Newcastle United: What to watch for

So which of these teams in need of a win can get one? Manchester United looks the more likely side despite the shooting woes, though the team’s only got two wins on the season. The most recent one was a 1-0 squeaker against Leicester two weeks ago, thanks to Marcus Rashford converting a penalty kick in the eighth minute—something we haven’t been able to say about Rashford (or, for that matter, United) this season.

Again, though, it could be worse. Last weekend, Newcastle faced the same team Man U recently edged, and lost 5-0, going down a man and giving up an own goal. Miguel Almiron’s been a revelation for NUFC despite the recent woes, and rumors are floating around that his old Atlanta United partner in goals, Josef Martinez, might join him in black and while come the next transfer window in January. Perhaps the team could use that kind of jump start?