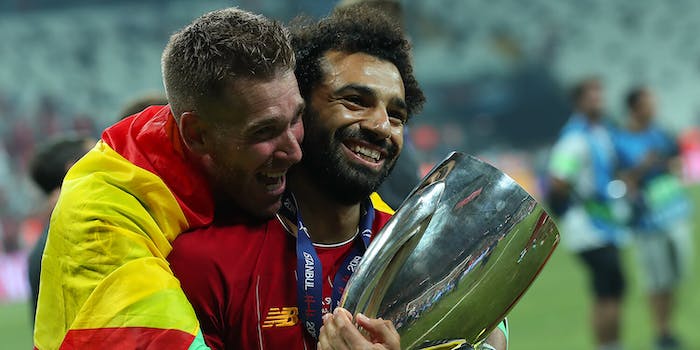 How to stream Liverpool vs. Leicester City

Liverpool's a perfect seven-of-seven so far in Premier League play this season, but Leicester's looked good, too.

Seven matches, seven wins. That’s been the 2019-20 Premier League season for Liverpool to date, though last weekend’s 1-0 win over Sheffield United was the first time the team’s been held to just one goal this season. Is that a sign of things to come? Or merely a hiccup in what could be a dominant season. It’ll all become a little clearer this Saturday, as Liverpool returns home for a tilt with Leicester City, currently third in the table.

Here’s everything you need to know to live stream Liverpool vs. Leicester City, including what to watch for on the pitch.

The Liverpool vs. Leicester City match is on NBCSN. These streaming services provide fans the opportunity to catch Premier League action throughout the season.

FuboTV is a solid TV streaming service option, whether your tastes run to entertainment (AMC, Syfy, FX), news (MSNBC, CNN), or sports (NBA TV, NFL Network). If you’re a soccer fan, however, it will appear tailor-made for you, with NBC and NBCSN, 10 beIN SPORTS channels, FS1, FS2, UniMás, and Champions League actions via TNT all on tap. If you can’t watch the Liverpool vs. Leicester City match live, FuboTV offers a three-day replay for each match and 30 hours of cloud DVR. (Check out the complete FuboTV channels list.)

Spanish-speaking viewers have quite a few options to watch Liverpool vs. Leicester City on Sling TV. For bilingual families, you might consider the Español: Best of Spanish TV package for either Sling Orange or Sling Blue for 24/7 specialty channel LaLiga TV and beIN SPORTS Connect: Channels 4-9, which features matches from La Liga, Ligue 1 and Copa del Rey, among others. Both packages cost $5 per month after your free trial. Sling TV Latino is another Spanish-language package for $10 per month, including NBC Universo, History en Español, and—of import to soccer fans—four beIN SPORTS channels. (And choosing Sling TV Latino + Sling Orange for $30 per month gives you access to ESPN Deportes.) For more information, check out our guide to Sling TV channels and our Sling TV review.

YouTube TV is a great option for soccer fans wanting to catch Liverpool vs. Leicester City, including TNT for Champions League matches, NBC and NBCSN for Premier League matches, and broadcasting partnerships with three MLS teams. (Take a look at the full list of YouTube TV channels here.)

If you want access to every Premier League game this season including and beyond Liverpool vs. Leicester City, you’ll want an NBC Sports Gold subscription. At the Matchday Pass tier, for $39.99, you get access to 140 exclusive live matches, with at least four for each of the 20 clubs. The Premier League Pass option gives you an option to replay matches, in case you can’t catch a match live, and offers additional programming, including analysis and highlights. NBC Sports Gold offers additional packages for fans who want to follow rugby action, the PGA tour, Indy Car racing, cycling, and lacrosse.

Liverpool vs. Leicester City: What to watch for

In Champions League action earlier this week, the defending champs had a wild 4-3 win over the Jesse Marsch-coached Red Bull Salzburg, making it two one-goal victories in a row. Wednesday’s match was definitely wilder than last Saturday’s affair in Sheffield, with Mo Salah providing a pair of goals to help the Reds overcome.

The Foxes went a little wild last weekend, connecting on all five of their on-target shots to blank Newcastle 5-0. Jamie Vardy, still one of the best strikers in the Premier League, had a brace to lead the team. The surprisingly-third-place team has four wins in its last five matches, with only a 1-0 loss to Manchester United spoiling the current run.

Something has to give on Saturday: Either Liverpool’s perfect win streak or Leicester’s current good run of form.