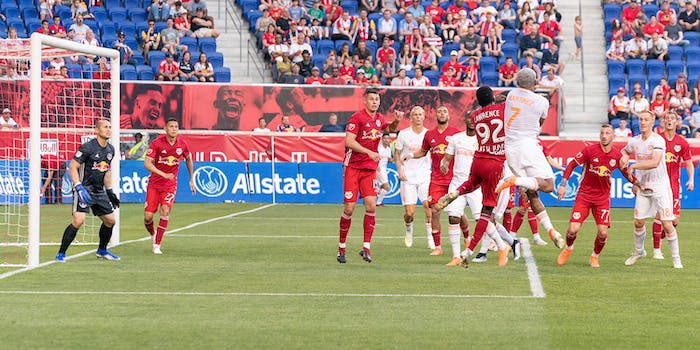 How to stream the 2019 MLS playoffs

The first round of MLS playoffs are coming. Every match is win or go home.

The MLS Playoffs have arrived. After 34 weeks of regular-season play, 14 teams have emerged to challenge for the MLS Cup, including defending champions Atlanta United.

This season, the playoff format is a bit different. The No. 1 seeds in the East and West, NYCFC and Supporters’ Shield winners LAFC, have earned byes, and don’t see action until the Conference Semifinals on Oct.24 and 25. That leaves the No. 2 through 7 seeds playing each other in three single-elimination playoff matches: 2 vs. 7, 3 vs. 6, and 4 vs. 5, with the higher seed hosting. The idea is to make sure the entire playoff schedule fits between FIFA’s October and November international windows—so it’s goodbye to two-leg aggregates, and every match is now a win-or-go-home situation.

Here are all the MLS first-round playoff matches you won’t want to miss, and here’s what you need to know in order to live stream MLS.

Toronto FC won the right to host this first-round match, in part because D.C. United couldn’t find a goal in its home finale, even though its opponents had two players sent off in the first half. (And these weren’t just any opponent: We’re talking FC Cincinnati, which let in an all-time MLS record 75 goals in over the course of the season.)

Toronto FC’s fortunes have been tied in recent years through a pair of American players, Jozy Altidore and Michael Bradley, though new addition Alejandro Pozuelo contributed 12 goals and 12 assists in his debut season to lead the team in both categories. Though Wayne Rooney is exiting at the end of this season to player-coach at Derby County in England, he’s still instrumental to the team’s postseason fortunes. Other potential contributors to a D.C. playoff run include U.S. international player Paul Arriola and journeyman Norweigan Ola Kamara, though it all might hinge on goalkeeper Bill Hamid keeping United in 1-0 and even 0-0 matches.

This is a rematch (as luck would have it) of the final match of the season this past Sunday, which Atlanta won 3-1. Josef Martinez, who’d been stretchered off two weeks prior—looking like his knee injury might be a season-ending one—returned to action in the finale and even scored a goal. How much he’s able to score, of course, will have a lot to do with whether Atlanta can defend its title. Pity Martinez, thought to be crucial to Atlanta’s 2019 fortunes, hasn’t been as productive as fans expected or wanted, but the team’s still relied on its collective talent to get this far. Still, though, the playoffs would be a great time for last year’s South American Player of the Year to show up.

New England, meanwhile, has found new vigor under midseason head coaching replacement Bruce Arena. The MLS whisperer, who has led both D.C. United and the LA Galaxy to multiple titles, is working his magic again with the Revs. Gustavo Bou has provided a boost since he came over from Club Tijuana in July, and goalkeeper Matt Turner’s kept New England in many a match down the stretch.

FC Dallas had to put together a late-season rally to get within playoff contention and then had to win its season-ending match against Sporting Kansas City. FC Dallas won emphatically, by a 6-0 margin, even with one of the team’s rising stars (midfielder Paxton Pomykal) out with injury. Still, goals came from all sorts of sources, including Zdenek Ondrasek (awesomely nicknamed “the Cobra”), rising young star Jesus Ferreira, and Michael Barrios, which is as close to a mainstay as it gets for a Dallas team very much in transition.

The Sounders, on the other hand, avoided their customary early-season swoon and dramatic midseason comeback, putting together a solid season to grab the 2-seed in the West. Comeback player of the year candidate Jordan Morris and Peruvian forward Raul Ruidiaz have both been vital to the campaign, but Uruguayan midfielder Nico Lodeiro remains the team’s engine with a seven-goal, 12-assist season to his credit.

Real Salt Lake is the surprising 3-seed, thanks in part to an impeccable home record and thanks in part to the rise of Jefferson Savarino, who put together an eight-goal, five-assist season to rival designated player Albert Rusnak for team MVP. Although, if we’re talking MVP, veteran goalkeeper Nick Rimando is heading into his final MLS season still looking in solid form. (Rimando, to give you an idea of how long he’s been around, was drafted in 2000 by the now-defunct Miami Fusion, and initially got to RSL as part of a trade also involving Freddy Adu.)

Portland, which won a Decision Day match against San Jose that functioned as a playoff match, may be without recent league MVP Diego Valeri, and will definitely be without forward Brian Fernandez, brought in from Necaxa in May to provide scoring punch. The team started 2019 on a long, tough, extended road trip, but survived to get to this point. If the Timbers are to get past the first round, look to Sebastian Blanco to play a significant role.

Philadelphia has been one of the surprises of the 2019 season, with players like Kacper Przybylko, Brenden Aaronson, and Jamiro Monteiro making their names known among the Union faithful. The injury to captain Alejandro Bedoya might be too much for the Union to overcome, and the season-ending loss to NYCFC might foretell an early exit. Marco Fabian hasn’t been as influential on the Union’s fortunes as many expected, but perhaps that’s what the playoffs are for?

The Red Bulls have had an up-and-down season, but find themselves back in the playoffs—though in perhaps a less advantageous position to win their elusive first MLS Cup than in previous seasons. They’re missing what Tyler Adams did as arguably the best d-mid in the league, and they’re also not the same on offense. Two-time Golden Boot-winner Bradley Wright-Phillips has seen his numbers drop off a cliff this year. Last year, he scored 20 goals and netted eight assists in 32 matches; this year, he’s only managed two goals and four assists in 28 matches. Daniel Royer, with 11 goals and eight assists on the year, has been crucial to getting the Red Bulls to this point.

Minnesota coach Adrian Heath has been beating the “no one believes in us” drum for weeks now, saying that many of the experts didn’t think they’d make the playoffs. That’s just not true, though: Adding Ozzie Alonso, Ike Opara, and Vito Mannone to this squad made a borderline playoff team a definite contender, and in nabbing the 4-seed and a home playoff match, they’ve arguably only outpaced expectations. To succeed beyond just getting to the playoffs, the Loons will want a big performance from Darwin Quintero, who looks more capable than the 10 goals and five assists he did contribute in 2019. (Those totals don’t count what he did in a deep U.S. Open Cup run.)

For the Galaxy, the defense has been suspect at times, but the team’s got one surefire offensive move: Cross it in to Zlatan Ibrahimovic and let Zlatan be Zlatan. The soft-spoken striker scored an eye-popping 30 goals in 29 matches, staying in Golden Boot contention through Decision Day. Zlatan’s not the only scoring threat, though; watch what Cristian Pavon can do from the wing, and enjoy his time in MLS before his likely move to a top European club.

FuboTV is a solid TV streaming service option, whether your tastes run to entertainment (AMC, Syfy, FX), news (MSNBC, CNN), or sports (NBA TV, NFL Network). If you’re a soccer fan, however, it will appear tailor-made for you, with TUDN for select MLS matches, NBC and NBCSN, 10 beIN SPORTS channels, UniMás, and Champions League action via TNT all on tap. If you can’t watch a match live, FuboTV offers a three-day replay for each match and 30 hours of cloud DVR. (Check out the complete FuboTV channels list.)

Sling TV provides two base channel package options, each priced at $25 per month. Sling Orange includes three ESPN channels (where MLS Playoff matches will be featured), while Sling Blue includes sports channels like NBCSN (where many Premier League matches appear), NFL Network, and local channels. (Sling Blue customers in select markets get NBC, where some matches appear; see if yours has it here.) If you’re Team “Why Not Both,” Sling Orange + Blue combines the two for just $40 per month. To add beIN SPORTS and maximize your soccer-watching potential, you’ll want to add either Sports Extra: Sling Orange ($5 per month) or Sports Extra: Sling Blue ($10 per month). (The latter also includes NFL RedZone.)

PlayStation Vue is a fantastic option for soccer fans who already own a PlayStation console, but this streaming platform is available on a variety of devices. The ESPN and Fox family of sports networks are part of the Core package of channels that offer soccer and other sports programming, and the options increase at the Elite and Ultra levels.