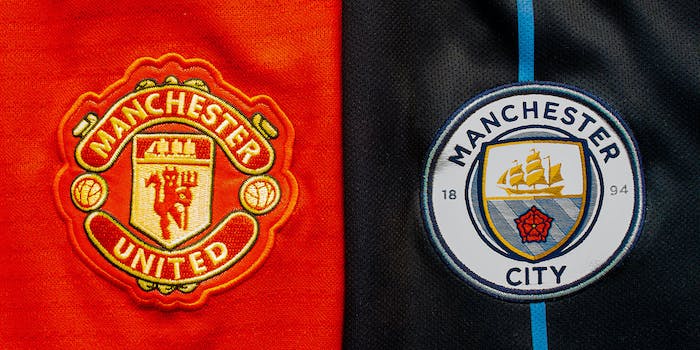 Whether you're red or blue or neutral, this is a must-watch match.

Stream Manchester City vs. Manchester United on Sunday; it’s one of the biggest Premier League matches of the year.

Here’s everything you need to know to stream Manchester City vs. Manchester United in the Manchester Derby.

Manchester City looks to be running away with the Premier League title, including a 4-1 win over Wolves on Tuesday in which the Cityzens poured it on late. Three unanswered goals starting in the 80th minute, two by Gabriel Jesus, turned a 1-1 draw into a rout.

Manchester United, meanwhile, trudged to a scoreless draw against Crystal Palace on Wednesday. Even a win against its rivals likely won’t be enough to make the Premier League race more than a one-horse race, but it would help firm up United’s return to Champions League play next season.

According to the oddsmakers at BetMGM (as of March 7):

How to stream the Manchester Derby: Premier League Live Streaming

You can stream Sunday’s Manchester Derby on NBCSN, available via the following streaming services.

It’s a great option for sports fans. It comes with ESPN, ESPN2, FS1, FS2, as well as NBCSN to stream Manchester City vs. Manchester United. Deeper sports cuts, like NBA TV, MLB Network, CBS Sports Network, and ESPNU are also part of the YouTube TV plan. For $10.99 more a month, upgrade to the Sports Plus plan to get NFL RedZone and six additional sports channels.