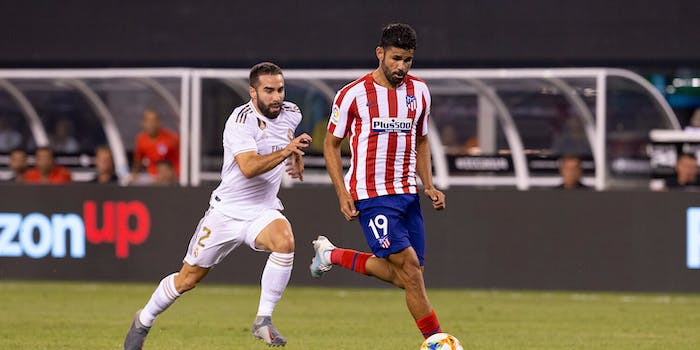 How to stream Atletico Madrid vs. Bayer Leverkusen in the Champions League

Atletico Madrid is virtually tied with Juventus in Champions League Group D, heading into its third matchday on Tuesday. However, in La Liga, it’s seen its early lead over Barcelona and Real Madrid slip as it’s mostly only able to draw in domestic play. Atleti will host Bayer Leverkusen, which is having its own struggles in the Bundesliga and is looking to get its first Champions League win of the season.

Here’s everything you need to know to live stream Atletico Madrid vs. Bayer Leverkusen, including what to watch for on the pitch.

The match is on TNT, TUDN and UniMas; the following services provide a one-week trial and therefore an easy way to watch Champions League matches for free.

Atletico Madrid vs. Bayer Leverkusen: What to watch for

Atletico Madrid got a goal from Diego Costa on Saturday, but let in a goal to break a string of 650 scoreless minutes, settling for a 1-1 draw with Valencia. The match, and the subsequent Sunday results, left Los Colcheneros fifth in La Liga as Barcelona won and Real Madrid suffered a shocking loss to RCD Mallorca. Alvaro Morata and Joao Felix will have to click better as goals have been hard to come by for the squad, even as it’s done exceptionally well at keeping them out.

Bayer, meanwhile, lost 3-0 to last year’s Europa League semifinalists, Eintracht Frankfurt, to drop to ninth in the Bundesliga standings. That’s not the team’s only 3-0 loss of late—they lost by the same margin in Champions League play to Juve last time. Look for Kevin Volland, who has scored for Bayer in three of its last four domestic matches, to test Atleti’s defense. Also look for Charles Aranguiz, the veteran Chilean midfielder, to return from injury to bolster Die Werkself.