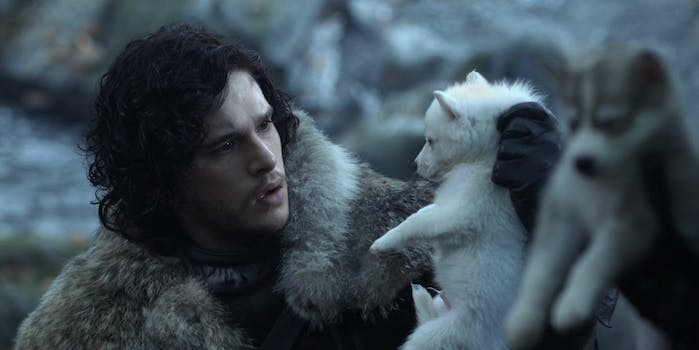 Which direwolves are left in ‘Game of Thrones’?

Leave some alive, HBO. We beg of you.

Like we saw in season 8, episode 2, Ghost has been hanging out at Winterfell ever since Jon’s forces won the Battle of the Bastards. Prior to that, he had been hanging out with Jon pre and post-stabbing at Castle Black and was the first to witness him being revived. The question now is how much of Ghost will we see, and will he take part in the battle against the Night King?

One surprising thing to consider: The direwolves are phenomenally expensive to use. In an interview with Business Insider, Battle of the Bastards director Miguel Sapochnik said that budgetary concerns made for tough cuts between Ghost and the giant Wun Wun.

“[Ghost] was in there in spades originally, but it’s also an incredibly time consuming and expensive character to bring to life,” Sapochnik told BI. “Ultimately we had to choose between Wun-Wun and the direwolf, so the dog bit the dust.”

Considering that Wun Wun ended the Battle of the Bastards by breaking open Winterfell’s gate and taking Ramsay Bolton’s arrow to the eye, I’m kind of OK with Ghost staying far from trouble in this case.

All that said, don’t be surprised if Ghost only gets another minute or so of footage in upcoming episodes. The animal might be doomed to a grisly fate if Winterfell proves to be the slaughtering ground that so many theorize it might become.

We last saw Nymeria confronting Arya on the outskirts of Winterfell. Near the start of season 7, Arya changes her plan to ride to King’s Landing and instead turns towards her original home, learning that Jon has defeated the Bolton army. On her way there, Arya is confronted by a pack of ravenous wolves. It turns out they’re being led by a fully grown Nymeria.

All the way back in season 1, after Nymeria protects Arya by biting Joffrey, Arya flees with Nymeria and leaves her in the wilderness, fearing for the direwolf’s safety.

As Nymeria confronts an adult Arya outside Winterfell, Arya recognizes her former pet and begs her to come back to Winterfell with her. The direwolf turns and leaves, either not understanding her former owner, or not caring. As Arya gazes on in disbelief, she whispers “that’s not you,” echoing Ned Stark’s similar line in season 1 when he realized his youngest daughter wasn’t bound for a life of royalty and leisure.

Sansa’s direwolf, Lady, was unfortunately executed way back in season 1, after Nymeria bit Joffrey in defense of Arya. When Cersei Lannister learned of the incident, she demanded that Nymeria be executed. Since Arya had already fled with Nymeria and left her somewhere in the wild, it fell to Lady to be the sacrifice to sate the Lannister’s bloodlust. On the bright side, she was killed humanely by Ned Stark instead of Lannister lackey Ser Ilyn Payne. Seriously, though, look at that adorable face above. Tell me that doggo is thinking anything other than “oh hello, human. Is it completely innocent cuddle time already?”

Summer, Bran’s direwolf (before Bran became a weirdly awkward omnipotent being), was essentially just hanging out with Bran, Jojen, Meera, and Hodor during their entire journey from Winterfell to the Three-Eyed Raven’s cave. When the White Walkers attacked the Three-Eyed Raven’s cave in pursuit of Bran, Summer (along with Leaf and Hodor) sacrifices herself to momentarily stall the undead from making it down the long corridor.

Direwolf to the ill-fated Rickon Stark, Shaggydog accompanied Bran and his direwolf Summer up until Bran decided that it wasn’t safe for Rickon any further north. Rickon and Shaggydog were escorted by Osha to House Umber for protection. Unfortunately, the Red Wedding happened only slightly thereafter, and it becomes clear the elder members of the Umber family have similarly betrayed the Starks. Fast forward to season 6, and Shaggydog is slain by the Umbers, his severed head delivered to Jon Snow and Sansa as proof that the Bolton’s have Rickon prisoner.

Of all the direwolves, Grey Wind might have been dealt the worst hand. As part of Robb Stark’s entourage, Grey Wind generally went where his master went, including to the Red Wedding. As Robb, Catelyn, and Talisa Stark are murdered in cold blood, another group of Frey and Bolton men move into the stable where Grey Wind is captive and shoot the direwolf full of crossbow bolts before Arya can release him. The direwolf dies looking at Arya from beneath the lip of the stable door and is later beheaded. Its head is mounted on the mutilated and beheaded corpse of Robb Stark and paraded around Walder Frey’s castle with men chanting, “Here comes the king of the north.”