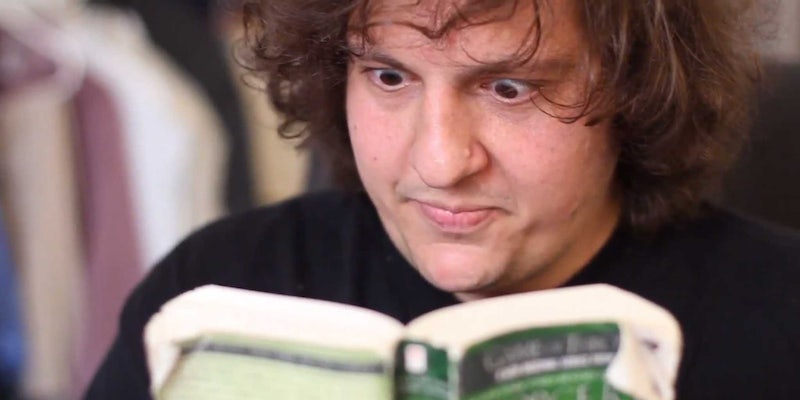 "I JUST WANT TO TALK ABOUT THIS WITH SOMEONE!"

We’re still not over the Red Wedding.

Many of us dove straight into George R.R. Martin’s A Song of Ice and Fire series during a Game of Thrones hiatus, but plenty of Martin fans have been with him since the very beginning.

Show watchers might have had nagging hints from knowing book readers for weeks, but for those people who first read A Storm of Swords in 2000, there were few people with whom they could find any sort of comfort.

One book reader, however, got creative in order to cope.

This isn’t actually the first video reaction to the Red Wedding. For one thing, Jon Bander is reading the mass paperback version released in 2011—but it perfectly captures the year 2000 in a nutshell, from the dated Staind song to the block Nokia cell phone he uses.

He tries AIM and multiple calls on his “cellie,” but nobody has read it. In fact, one friend is too preoccupied with “something called Azkaban” and playing his Dreamcast to read the books.

“I JUST WANT TO TALK ABOUT THIS WITH SOMEONE!” he shouted.

But when he finally does find someone to talk about it with, he runs into another 2000-era problem.

When in doubt, reload your minutes. You never know what you could be missing out on.