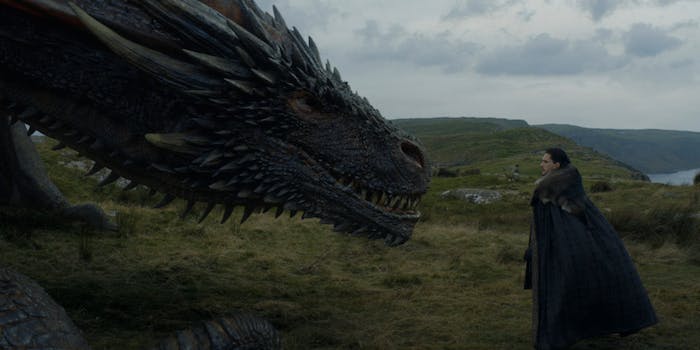 Will Jon Snow ride Viserion in ‘Game of Thrones’ season 8?

Is it even possible?

The battle lines have been drawn ahead of Game of Thrones’ final season as Daenerys Targaryen and Jon Snow, and most of Westeros form a united front against the Night King. And while much of the fighting will take place on the ground, it could all come down to a few major players and three very large dragons. But who will ride them? It’s possible that it’s not all set in stone just yet.

Out of all the men who survived the ill-fated venture to grab a wight beyond the Wall last season, Jon Snow was the only one who wasn’t able to climb on top of Drogon’s back to escape the Night King. He ended up in the water, nearly frozen to the bone, and had to find his own way back to Eastwatch-by-the-Sea on Benjen Stark’s horse. After the show revealed that Jon is a legitimate Targaryen, the decision to not have him ride Drogon seemed like an even more intentional one. Instead of having him climb on top of Drogon to escape the Night King’s wrath with everyone else, why not make it a more special moment in season 8 with a proper theme from composer Ramin Djawadi?

We already saw him bond with Drogon, and his Targaryen family ties will certainly be a factor. After the Night King killed and resurrected Viserion, Daenerys only has two dragons left, so logistically the matter who which dragon Jon would ride is easy. It’d be Rhaegal, the only other living, unclaimed dragon in Westeros. But at least according to some fans, there’s still an argument to be made about Jon making a claim on Viserion.

Will Jon ride Viserion in Game of Thrones season 8?

What we know about dragons and who can ride them

Although Daenerys’ rescue of Jorah Mormont, Sandor Clegane, Tormund Giantsbane, and Beric Dondarrion beyond the Wall made it seem like anyone could just hop onto a dragon, that’s almost certainly not the case most of the time. You can argue that Drogon allowed them to all climb on board in that specific instance, but for everyone else, they don’t have the predisposition to do it at all.

Even at the height of the Valyrian Freehold’s reign—which occurred thousands of years before the start of Game of Thrones—only some of the noble families of Valyria, such as the Targaryens, had the ability to ride dragons. Known as dragonlords, they reportedly used magic and dragon horns to accomplish this. And when the Targaryens fled Valyria for Dragonstone 12 years before the Doom of Valyria, they brought their dragons with them. While that ability remained prevalent among the Targaryens throughout their time in Westeros, all the way to Daenerys (and potentially Jon), not every Targaryen could ride a dragon. If you’re not a Targaryen or your ties to the family are minimal such as the book-only character Quentyn Martell, attempting to do so can end in disaster and death.

Unlike nonmagical creatures, there’s a special bond between a Targaryen and their dragon, one that cannot be broken by conventional means; when a Targaryen claims a dragon, they’re bonded for life. If the rider dies, the dragon can bond with another rider, and if the dragon dies, that rider can bond with another dragon. But according to Fire and Blood, trying to ride a bonded dragon can have dire consequences.

We shall not pretend to any understanding of the bond between dragon and dragonrider; wiser heads have pondered that mystery for centuries. We do know, however, that dragons are not horses, to be ridden by any man who throws a saddle on their back. Syrax was the queen’s dragon. She had never known another rider. Though Prince Joffrey [Velaryon] was known to her by sight and scent, a familiar presence whose fumbling at her chains excited no alarm, the great yellow she-dragon wanted no part of him astride her.

During the Dance of the Dragons, Joffrey Velaryon tried just that, which led to Syrax turning in the air to get rid of him and Joffrey falling to his death.

Although Daenerys Targaryen has three dragons in Game of Thrones, she is only ever seen riding one of them: Drogon, the biggest and most intimidating of them all, starting toward the end of season 5. Which left the other two dragons for the taking—at least until the Night King swooped in and took an undead Viserion for his own bidding, at least for now.

Why people believe that Jon could ride Viserion

Those who invest in the theory that Jon could ride Viserion before the end of Game of Thrones come at it from a couple of interesting angles, at least on the show. (At the end of A Dance With Dragons, Viserion is still alive and has recently been released from his captivity in Meereen, so it’s unclear how much any of this will apply to the books.)

Jon and Viserion have one big thing in common. They were both resurrected, albeit in different manners. Jon’s resurrection was performed by chance thanks to Melisandre’s presence at Castle Black and invoked the Lord of Light. Viserion’s was wordless, performed with a touch from the Night King (instead of with the kind of hand raise he performed at Hardhome). On the show, Jon is brought back to life by fire like Beric Dondarrion, who George R.R. Martin once described as “a wight animated by fire instead of by ice” due to the sheer number of resurrections. Viserion is similar to a wight animated by ice, although he’s much more powerful and capable than any other living wight.

For the theory to play out on the show, a couple of huge factors would need to come into play. First off, is Viserion truly bonded to the Night King if it was done so by additional force and magic? And if he isn’t, could Jon be the one to bond with him?

Through his parents, Jon is the very embodiment of “the song of ice and fire,” the title of the book series on which Game of Thrones is based and a phrase used by Rhaegar Targaryen when describing the Prince That Was Promised, a prophesied savior who’s also known as Azor Ahai (and who may very likely be Jon). But Viserion might be too. While Dragons are “fire made flesh,” Viserion has also been brought back to life with ice. Together, they could be an even greater symbol of balance.

Another iteration of the theory is much similar. This version points out that both Jon and Viserion fell into the frozen lake and that magic was involved for both of them. In Jon’s case, how else would he have survived his plunge into the water?

Why it doesn’t make sense for Jon to ride Viserion

No matter how the theory is spelled out, there’s one giant factor standing in the way between Jon riding an undead dragon: the very creature who’s currently riding it. While we don’t know how close the Night King will be to Viserion throughout season 8, it’ll be very hard to separate the two as long as the Night King lives. Logistically, Jon would do something even more stupid and risky by sneaking into enemy territory (or a battlefield) to bond with an undead dragon.

But killing the Night King won’t make that theory more plausible; in fact, it may be downright impossible. In “Beyond the Wall,” well before Viserion took an icy javelin, Jon and his friends discovered that White Walkers have a vampire-esque relationship to the wights they create. Basically, when you kill a White Walker as Jon did with his Valyrian steel sword Longclaw, you also kill all of the wights that White Walker created. Given that new information, Jon and the other theorized that to eliminate the entirety of the Army of the Dead, all they had to do was kill the Night King since he created every White Walker that came after him. (Easy enough, right?)

The downside to that for those who want Jon to ride Viserion is that Viserion will die the moment that the Night King dies if Jon’s theory holds true. And it’s highly unlikely that Jon will be able to ride Viserion until then.

Besides, there’s a perfectly legitimate dragon in Rhaegal, who has more of an emotional tie to Jon because that particular dragon was named for Jon’s father (and Daenerys’ brother) Rhaegar. By Jon riding Rhaegal, you get the significance of Jon embracing his Targaryen side without having to worry about the consequences of trying to tame an undead dragon or stealing from the Night King. And as far as balance is concerned, Jon already has his direwolf Ghost to represent the ice part of the “a song of ice and fire” equation in regards to fantasy creatures bonded to him.

The theory highlights one of Game of Thrones‘ lingering flaws

Out of all of the theories that fans shared throughout Game of Thrones’ seventh season, one of the more absurd was the insistence that Bran warged into Longclaw while Jon was still under the water at the lake. (Alan Taylor, who directed “Beyond the Wall,” debunked it.) It showcased not only the extent of Game of Thrones fans’ imagination as well as a need to have an explanation of every single piece of information in a show full of detail.

That kind of frustration with Game of Thrones extended beyond Longclaw. The show’s season-long warping of time encompassed much of this, but so did Jon’s unlikely survival in the frozen lake. Unlikely as it seemed, Jon arrived at Eastwatch-by-the-Sea on the back of Benjen’s horse nearly frozen to death, even though he would’ve died in most other cases.

How did Jon survive? In the grand scheme of the show, it doesn’t matter how he did, just that he did. With a full season of battles and revelations ahead, some of those smaller details might get lost in the fray.

So sure, there’s always the chance that Jon could ride Viserion in season 8 without too much thought into how it happens. But sometimes, especially if there’s an easier solution, an undead dragon might just be an undead dragon.