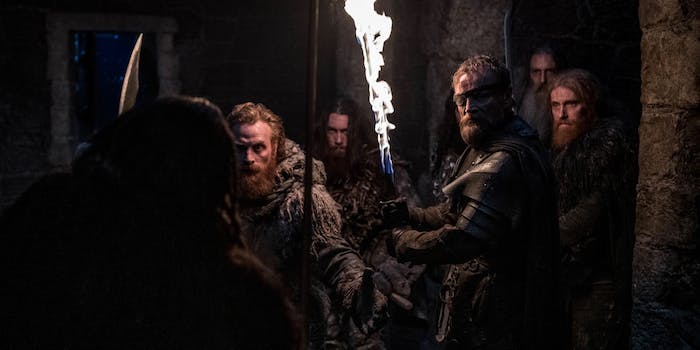 Think the ‘Game of Thrones’ spirals are all connected? Think again

They might look alike but have less in common than you think.

In its eight-year run, Game of Thrones has has often planted seeds and echoed itself later on. In an episode full of those echoes, some fans made a connection between the political and the supernatural. But are the similar spiral displays anything more than a coincidence?

Toward the end of “Winterfell,” Tormund Giantsbane, Beric Dondarrion, and Eddison Tollett converged at the Last Hearth, the seat of House Umber and the closest stronghold to Eastwatch-by-the-Sea. It’s clear from the dead bodies that a massacre took place, and soon enough, the trio discovered the centerpiece of the Night King’s massacre: a Hannibal-esque work of art with young Ned Umber pinned down and surrounded by limbs placed in a spiral pattern around him.

“It’s a message from the Night King,” Beric says of the display, which comes to life as Ned returns as a wight. He’s quickly killed by Beric’s flaming sword, but it also highlights the shape and design of the Night King’s message.

The trio doesn’t ponder any further about what the Night King’s message could mean. But fans, having already recognized the symbol as something that’s shown up on the show before, made a connection between the spiral and the sigil of House Targaryen.

What does the pattern mean? The jury is still out on that one, and given that the Night King has never spoken a word on Game of Thrones, we may never find out. But any connection to the Targaryen sigil is merely a coincidence, one meant for the living over any particular ruler.

The Night King’s inspiration lays in the far past

As I explained last season, Game of Thrones has linked the White Walkers and that spiral pattern over much of the show. With the exception of the wildling body display in the pilot, they’ve also positioned horse corpses in that pattern, and when Jon Snow and Daenerys Targaryen view the cave carvings at Dragonstone, that pattern is invoked in the story of the Long Night.

“Always the artists,” Mance Rayder noted after finding the display beyond the Wall in season 3.

We often see these displays in an aerial view, which shows how big they are and how many bodies it took to make them. Compared to the horse display at the Fist of the First Men, the Night King’s Ned Umber piece is downright understated.

It isn’t until season 6’s “The Door” that we learn about the Night King’s origins. Bran and the Three-Eyed Raven watch the creation of the Night King unfold in front of them as Leaf pushes a dragonglass blade into the heart of a man strapped to a tree.

The “link” between the Night King and House Targaryen

Between the cave carvings and Bran’s vision, it’s clear where the Night King got his inspiration. It wasn’t House Targaryen who inspired him but rather the children of the forest.

You can see it for yourself with the weirwood tree that served as the birthplace of the Night King. The weirwood tree is front and center while the stones around it form the spirals.

“These are patterns that have mystical significance for the children of the forest,” David Benioff explained in a season 7 behind-the-scenes video. “We’re not sure exactly what they signify, but spiral patterns are important in a lot of different cultures in our world, and it makes sense that they would be in this world as well.”

The show has never touched on why the children of the forest were drawn to the spirals, but by invoking them to create the Night King, it guaranteed that he would be drawn to using them, too. It’s not entirely clear, though, whether it’s a symbol that the Night King reveres or is one he’s trying to pervert thanks to its significance to the creatures who made him who he is.

We also need to remember how relatively new House Targaryen is to Westeros. They first immigrated to Dragonstone ahead of the Doom of Valyria, which occurred more than 100 years before Aegon’s Conquest. Even then, it took a while for the Targaryens to embrace the sigil.

House Targaryen only has a sigil in the first place because Aegon the Conqueror was basically trying to fit in.

“Heraldic banners had long been a tradition amongst the lords of Westeros, but such had never been used by the dragonlords of old Valyria,” The World of Ice and Fire stated. “When Aegon’s knights unfurled his great silken battle standard, with a red three-headed dragon breathing fire onto a black field, the lords took it for a sign that he was now truly one of them, a worthy high king for Westeros.”

The three-headed dragon represented Aegon and his two sister-wives Visenya and Rhaenys, three rulers who were each their own person but, in terms of Westeros, acted on a united front.

George R.R. Martin suggested that Aegon the Conqueror knew something about the White Walker threat on Westeros more than 300 years after he would try to unite the Seven Kingdoms. But how aware Aegon would have been of the Night King or the spiral he invokes—both show creations—isn’t exactly clear. (For instance, it doesn’t seem like any dragons have ever gone beyond the Wall before Dany flew over with her dragons last season.) A greater link between the Night King and the sigil of House Targaryen is kind of a stretch, even for a series full of connections, and it might be nothing more than a coincidence.