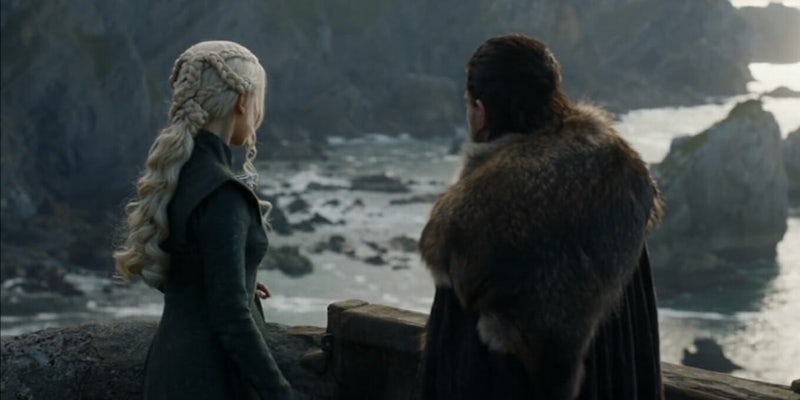 How will it all end?

Game of Thrones season 8 is finally here, and fans are desperate for any tidbit they can find about how it ends. Entangled characters and dangling storylines will finally reach a conclusion, though we may not like everything we see. Years of intense fandom and speculation has resulted in a ton of compelling Game of Thrones theories. In fact, George R.R. Martin has said that at least one person has predicted the ending. But what that might be is still anyone’s guess. Here are the best Game of Thrones season 8 theories. We apologize in advance for any unintentional spoilers.

Game of Thrones theories: The 10 best fan theories for season 8

Brandon Stark underwent a dramatic journey between season 1 and now. At the end of season 6, Bran became the Three-Eyed Raven. This ancient title granted him unlimited knowledge and the ability to see the past, present, and future. In the course of a vision, Bran unwittingly affects the mind of young Wylis, creating his protector Hodor.

A popular theory postulates that Bran, in another display of improperly wielded power, will accidentally drive King Aerys II Targaryen insane. Tales of his final days say that the Mad King commanded his guards to “burn them all.” White Walkers can only be killed by dragon glass or Valyrian steel, but fire can stop their wights. The phrase repeated by the Mad King before his death could have been a warning from Bran.

Another possibility is that, similar to how he affected Hodor, Bran’s twisting of Aerys’s mind is entirely accidental. We don’t know what to expect from the final battle, but it promises chaos and no small amount of bloodshed. It seems entirely possible that Bran, embroiled in the mayhem, could unwittingly press upon Aerys’s mind, forcing him into madness.

Another potential level to this theory, as outlined by redditor andrewguenther, is that Bran knowingly created the Mad King to ensure Jon’s victory over the Night King. “I think that Bran can see all possible timelines, and he knows that Jon was the only one who could lead the armies of Westeros against the Night King,” the user wrote. “Bran ensures this timeline comes to pass by driving Aerys mad.”

2) Jon and Dany will have a child

All the way back in season 1, Game of Thrones set the stage for this particular plot line. After Dany loses both Khal Drogo and their son Rhaego, the witch Mirri Maz Duur tells Dany that Drogo will be like he was “when the sun rises in the west and sets in the east. When the seas go dry and mountains blow in the wind like leaves.”

In A Song of Ice and Fire, however, this prophecy had another line to it: “When your womb quickens again and you bear a living child, then he will return, and not before.”

This line appears to be the reasoning behind Dany’s certainty that she will never have another child. She repeats it several times, and it’s really hammered home in the final episode of season 7. Could the prophecy hint toward the child she and Jon would conceive later that episode? Probably. The idea has been discussed by people all over the web, with most agreeing that a baby is a sure thing. (For more, see “Why is Daenerys Targaryen convinced she can’t conceive?“

3) The Iron Bank will betray Cersei

We would all be pleased to see Cersei finally get what she deserves. Sure, it was great seeing her humiliated and shaved, but that all feels so long ago. Since her time imprisoned by the High Sparrow, Cersei has claimed the lives of numerous beloved characters. She’s just the worst.

The Lannisters take great pride in their unofficial house motto that “a Lannister always pays his debts.” It is this motto, according to redditor FellatioNelson’s theory, that will lead to Cersei’s downfall.

“This is her big mistake, Tywin was no fool and he knew that while the Lannisters were in debt to the Bank [that] the Bank had a vested interest in their success,” FellatioNelson wrote. “By paying the debt in full, Cersei has allowed Tycho to wash his hands of the Lannisters altogether.”

The idea that the Iron Bank will turn against Cersei because she paid her debt sounds exactly like something a bank would do. Plus, with Daenerys’ devastating display of power in The Spoils of War, the Iron Bank has plenty of reason to consider her a safe investment.

Considering Cersei Lannister’s behavior since well, forever, this theory makes a lot of sense. In the season 7 episode “Eastwatch,” Cersei announces to Jamie that she is pregnant with his child. Through the end of the season, she seemed to have shifted her outlook. She approached every decision with her unborn child in mind. Repeatedly, Cersei reminded viewers of her expected child but displayed no signs of pregnancy.

This could absolutely be due to the relatively small amount of time that has passed in the show. For many women, signs of pregnancy take a long time to show themselves, and of course, every mother varies. That said, Cersei’s lack of evidence could also indicate that she fabricated the entire pregnancy. Fans have been discussing the possibility on Reddit for more than a year, with many agreeing that Cersei’s gradual unraveling could hint toward a hysterical pregnancy.

5) Bran Stark is the Night King

This is one of the most popular Game of Thrones theories out there. Bran Stark changed a lot between seasons 1 and 7. He became the Lord of Winterfell for a short time, traveled north of the Wall, and became the Three-Eyed Raven. He learned how to harness his powers as a Warg, and that he can affect the events of the past through his visions.

It is Bran’s ability to affect the past that this theory relies upon. One redditor, who goes by Balerionknight, explained the theory in detail, suggesting Bran will go back in time to stop the creation of the Night King. In his attempts to do so, however, he will be trapped in the past. Ultimately, the user believes that Bran was the Night King all along. He journeyed south when he discovered that he—the Bran Stark that we know and love—was alive and ready to set the timeline in motion. (That said, our own Michelle Jaworski has debunked this theory with authority.)

Every sign points to the long-anticipated fight between the Hound and the Mountain finally happening in season 8. Sandor Clegane and his older brother, Ser Gregor Clegane, have been opposing forces since the series’ first season. Fans have been clamoring over a possible face-off for years, but a dropped hint in the final episode of season 7 seemed to confirm it.

“It’s not how it ends for you, brother,” the Hound said. “You know who’s coming for you. You’ve always known.”

These ominous words set the stage for an epic battle. The Cleganes are powerhouses and have survived incredibly unlikely odds. The Mountain was practically dead when Cersei had Qyburn “bring him back,” and at the end of season 4, Arya left a bloody and broken Hound to die. Fans online are hyped for the all-but-certain showdown, which is sure to be the end of at least one Clegane.

The Maesters are a mysterious bunch. Even experts in Game of Thrones lore have questions about this elusive order. There are heaps of subreddits dedicated to different theories about the Maesters, but one theory is far more frequent than the rest.

Referred to as the “Grand Maester Conspiracy Theory,” this idea revolves around the idea that the Maesters are fervently opposed to magic. The order has long respected science and intellectual pursuits and has gained impressive power throughout the Seven Kingdoms. The theory postulates that they are secretly working against Daenerys to prevent the return of magic, that all of their planning could come to a head in the final season, and that they will throw their support behind Cersei.

8) Varys is a merman

Varys’ mysterious nature and past have lead to numerous theories surrounding his origins. This particular theory may seem a bit bizarre to most, but it has a surprisingly robust following. It’s based more on hints dropped in the book series than on the television show, but some fans are genuinely expecting a reveal in season 8.

A more than five-minute-long video uploaded by Tinfoil Fan Theories suggests that Varys is one of the mythical “merlings” mentioned repeatedly in the books. The video outlines a list of potential evidence of Varys’s true origins, including his “slimy” smile, that his lower half is always concealed, and certain comments he made to Tyrion. The evidence isn’t air-tight, but the thought put into this theory definitely makes it worth checking out.

We know it doesn’t seem likely, but stick with us here. Jon Snow would never strike Daenerys down under normal circumstances, but how often does “normal” describe his life? There is a theory that Jon will have no choice but to kill Daenerys to fulfill the prophecy of the Prince that was Promised.

The prophecy claims that Azor Ahai, the legendary champion of the Lord of Light, will return as the Prince that was Promised. Both Daenerys and Jon fit most of the criteria for the Prince that was Promised, but only Jon was brought back to life through the Lord of Light’s magic. Fans believe this means that Jon will become the reborn Azor Ahai, but there is a dark side to the prophecy.

To forage his sword Lightbringer—the iconic flaming blade—Azor Ahai plunged it into the heart of his beloved wife Nissa Nissa. If Jon Snow really is the Prince that was Promised, fans theorize, he will have to repeat the act with his love, Daenerys.

10) One of Cersei’s brothers will kill her

There were so many Game of Thrones theories surrounding Cersei’s death, we decided to lump them together. One thing seems certain: Cersei will die in season 8. In what’s been called “the Cersei prophecy,” the wood witch Maggy, who Cersei visited as a child, prophesied that a “younger, more beautiful (Queen) [will] cast you down and take all you hold dear.”

For this reason, there are dozens of theories online about how, exactly, Cersei will be cast down. In A Song of Ice and Fire, the wood witch tells Cersei “and when your tears have drowned you, the valonqar shall wrap his hands about your pale white throat and choke the life from you.” Valonquar is the High Valyrian word for “little brother.”

This quote leads many to postulate that it will be one of Cersei’s brothers who ultimately takes her life. Tyrion killing Cersei would be a certain form of poetic justice, given how she’s tormented him over the years, but what if Jamie struck the killing blow?

It must be noted that the show has laid very little, if any, groundwork for this particular theory. The witch makes no mention of Cersei’s valonqua or of her death.

Another interesting theory has Jamie holding the knife—or so it would seem. Several redditors have offered the theory that Arya will cross Cersei’s name off her list while wearing Jamie’s face. Given Arya’s particular skill set, the theory is certainly possible. Cersei’s lack of trust of anyone other than Jamie—not including the Mountain and Qyburn—would make it the perfect disguise.