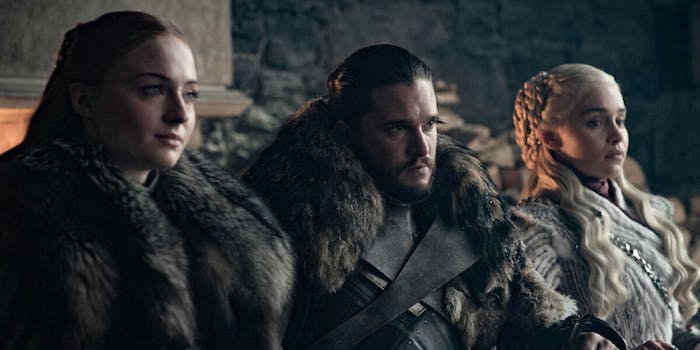 How to watch ‘Game of Thrones’ season 8, episode 2 for free

We're one step closer to facing the Army of the Dead.

Out of all the reunions we’ve seen so far from Game of Thrones season 8, none are more beautiful than the one with our Sunday night schedules.

What makes Game of Thrones season 8, episode 2 so exciting is we have no clue about what to expect at this point. Now that the show has dropped its main surprise genealogical bomb on Jon Snow, there’s not much else we know aside from a pending battle with the Army of the Dead. (And a disappointing lack of elephants.)

The showrunners are strategically leaving fans in the dark. Even the very title of Game of Thrones season 8, episode 2 remains a mystery until after it has aired.

Will this episode include more screeching nightmare children? Will Ghost finally return from his sabbatical? Will Bran ever leave that courtyard? It’s anyone’s guess what will happen, but we’re thrilled about the suspense.

Here’s everything you need to watch Game of Thrones season 8, episode 2 for free.

Game of Thrones season 8, episode 2 is available exclusively on HBO.

When does Game of Thrones season 8, episode 2 air?

Subsequent episodes will be on Sundays at the same time. There are six episodes scheduled for the final season, ranging in length from 54 minutes to a whopping 82 minutes. The third episode is the longest of the season.

How to watch Game of Thrones season 8, episode 2 for free

If you just want HBO and nothing more, look no further than its own on-demand app HBO Now. New episodes of Game of Thrones will be available the second they are live, and you can pause without missing any of the action. You can also watch all seasons on-demand. The standalone service also provides an extensive library of all HBO shows, movies, documentaries, and more.

As much of a crowd-pleaser as the Game of Thrones season 8 premiere turned out to be, it lagged at times as it made sure that most of the emotional stakes were in place by the time the Night King arrived in Winterfell. But in true Westerosi fashion, there was enough drama to threaten what should be a no-brainer of an alliance. If nothing else, “Winterfell” will be known as “the one where everyone reunited before it all fell to shit”—and we still have a few more reunions to look forward to in future episodes. —Michelle Jaworski

Any of the previously mentioned services include access to all seven seasons, plus season 8 episodes that already aired. But if you’d prefer a more permanent option, you can also buy old Game of Thrones episodes.