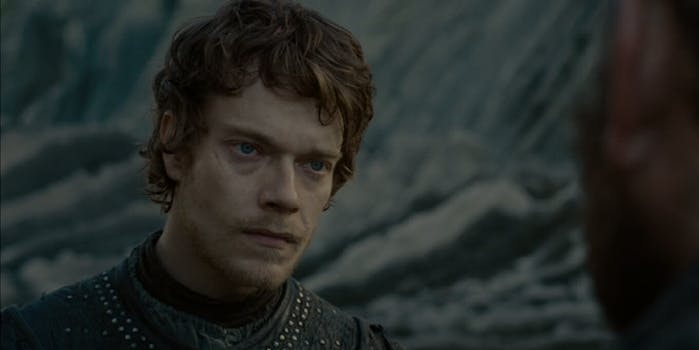 Can Theon Greyjoy possibly redeem himself in ‘Game of Thrones’?

How will Theon's story end?

Very few people know what Game of Thrones season 8 has in store for us.

We’re all hoping to see our favorite Westerosi heroes vanquish the White Walker army, but when it comes to Game of Thrones, nothing is certain. One character whose fate has long been a mystery is Theon Greyjoy. The ironborn prince we all love to hate has been through more than most on the show, and his role in the final season may decide how we remember him.

Who is Theon Greyjoy?

Theon is Lord Balon Greyjoy’s only living son, and under normal circumstances, he would be heir to the Iron Isles. Eight years before the series began, Balon Greyjoy rebelled against the Iron Throne. His rebellion was soundly crushed by the combined might of King Robert Baratheon and Lord Eddard Stark. Balon’s elder sons were killed in the fight, leaving behind a youthful Theon and his older sister Yara.

When Balon surrendered, he was allowed to remain King of the Iron Isles if he agreed to send Theon to live with the Starks. Though technically a hostage, Theon was treated well by the ever-honorable Stark family. Raised alongside Ned’s own children, Theon eventually became very close with Robb. When Ned was taken into custody by Cercei and Joffrey in Kings Landing, Theon joined his adopted brother’s march south.

Theon’s betrayal of Robb really set the groundwork for who the character would become. After reuniting with his father, Theon had the brilliant idea to take Winterfell while northern forces were away. His plan worked perfectly, but without reinforcements, Theon was soundly defeated by Ramsay Bolton—who at the time was still a Snow—when he arrived to “assist” the Starks.

In the dungeons of Winterfell, Theon underwent his transformation into Reek.

Ramsay, a twisted and sadistic man, tormented the young Greyjoy extensively. He pried off Theon’s fingernails and partially flayed him. When Ramsay fully castrated Theon, the young ironborn finally broke. A large piece of Theon Greyjoy was destroyed when he finally accepted Ramsay’s new name for him. All that was left, for a time, was Reek.

Reek’s existence was a pitiful one. Through all of seasons 4 and 5, Reek’s torment was unceasing. By the time he escaped the young Bolton’s clutches at the end of season 5, a little bit of Theon was beginning to creep back in, but he was still a broken man.

After escaping from Winterfell, Theon returned to his family in the Iron Isles. Their father recently murdered, Yara accused Theon of returning to claim the Salt Throne. When pressed, Theon admitted that Yara would be a better ruler for Pyke. He backed her at the Kingsmoot and declared her the Queen of the Iron Isles. Unfortunately, Euron Greyjoy—their father’s estranged brother—interrupted the proceedings, and convinced the unsurprisingly sexist Iron Islanders to elect him as King instead. Yara and Theon were forced to flee or be killed by their uncle.

Theon will never again be the arrogant young man who conquered Winterfell, but by this point, Reek had drifted to the back of his personality. The young Greyjoys voyaged across the seas to Meereen, where they arranged a meeting with Daenerys Targaryen. By the end of season 6, they were traveling back to Westeros with Dany, allies of the Dragon Queen.

After Yara and Theon threw in their lot with Daenerys, their combined forces made for Westerosi waters. On their way to return Ellaria Sand and her kin to Dorne, Euron struck. His brutal attack claimed the lives of Obara and Nymeria Sand, as well as countless of Yara and Theon’s ironborn.

When Euron captured Yara and gave Theon the chance to fight for her life, Theon froze. He chose instead to leap from the side of the ship, abandoning his sister to their uncle’s sadistic clutches.

After being saved from the sea by Captain Harrag’s crew, Theon tried at first to lie about this cowardly act. By the end of season 7, however, he decided that he would risk his own life to fight for his sister. After nearly losing a fistfight to the Captain Harrag, Theon managed to gain the upper hand and convinced the remaining ironborn to join his rescue mission.

How will Theon affect season 8?

There are no certainties when it comes to Game of Thrones. Fans collectively harbor a quiet dream that Theon will easily rescue a miraculously unharmed—and unbroken—Yara to return triumphant to the Iron Isles, but that is the not the Game of Thrones way. In the final episode of season 7, Euron told Theon he would kill Yara if Theon didn’t submit to him. Theon refused but rallied his remaining forces to retrieve her. That means much of Theon’s arc in season 8 will likely revolve around his efforts to locate and save his imprisoned older sister.

It is also important to note that if Captain Harrag’s ship survived, they were probably not alone. If Dany still has a fleet—however small—at her command in season 8, she will need someone with experience to lead it. Theon lacks the experience—not to mention the cajones—to lead his ironborn brethren into war.

If Theon manages to rescue Yara, however, the ironborn will have their commander. The White Walkers seem to have an issue with water, as displayed in the season 7 episode Beyond the Wall. Ships may not play a big part in the final fight, but it probably wouldn’t hurt to have a capable seaman on their side. Besides, Yara has already proven herself as a great fighter, and humanity needs all the help it can get.

It should be noted that Yara was noticeably absent from all of season 8’s promotional material. None of the posters, teasers, or emoji featured the eldest Greyjoy, leaving fans to speculate about her fate. The lack of information could certainly mean that Yara is already dead, but it seems more likely that HBO is merely keeping its cards close to the chest.

There is, of course, a more morbid potential for Theon’s ultimate fate. If Theon finds that his sister already dead, or—maybe worse—a broken woman, he has his work cut out for him. While a reverse-Reek situation could lead to some very interesting viewing, it would also require a lot of strength and fortitude from Theon—traits he rarely displays. Some fans have also speculated that Theon might lose his life in pursuit of his sister, a possibility that would help to redeem the character.

Whatever his role in season 8, fans are hoping this long-tormented character will finally see some closure. He may not be the easiest hero to root for, but Theon is sure to play an important part by the time we see the final credits roll.