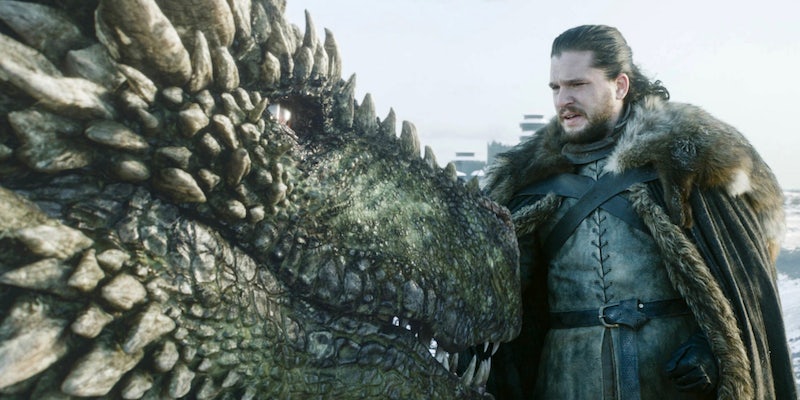 Who can ride a dragon on ‘Game of Thrones’?

It's a very select club in Westeros.

The crowd-pleasing Game of Thrones season 8 premiere offered quite a bit for longtime fans of the show. It featured a dozen reunions of all shapes and sizes, gave us more character moments strung together than we’ve seen in some time, and gave one of its heroes a moment of triumph rife with ancestral ties.

Last season, Jon Snow was the only person who traveled beyond the Wall who wasn’t rescued by Daenerys Targaryen and Drogon; he fell into the lake and made it back to Eastwatch-by-the-Sea thanks to Benjen Stark. At the time, we figured that perhaps the show had wanted to give Jon (the son of a Stark and a Targaryen) the proper moment when he finally mounted a dragon versus having him just climb onto Drogon’s back like everyone else. And we didn’t have to wait long for him to get his moment to ride a dragon.

It doesn’t come without some hesitation. Jon and Dany visit Drogon and Rhaegal, who both don’t seem too keen on the North, when Dany offers him the chance to ride her other dragon. Jon pushes back, noting that he has no idea how to ride a dragon.

“Nobody does until they ride a dragon,” Dany simply replies. She’s also pretty calm about the possibility that Rhaegal could just kill Jon for attempting to ride him, noting that if that’s the case, “Then I’ve enjoyed your company, Jon Snow.”

Fortunately for them, Jon doesn’t die or fall off the back of Rhaegal, the dragon named for his father. Afterward, he and Dany get to share one last romantic moment before Samwell Tarly reveals the truth about Jon’s parents and position in Westeros. But that final moment of reprieve not only gave Jon a new skillset, but it also unlocked a key window to his ancestors.

Apart from Dany, Jon is the only living person on Game of Thrones who can say that he’s ridden a dragon and lived to tell the tale. By mounting Rhaegal, Jon ended up bonding with Rhaegal on his own. It’s both an instinctual act and entirely mysterious, even to those who’ve devoted their lives to studying dragons.

“We shall not pretend to any understanding of the bond between dragon and dragonrider; wiser heads have pondered that mystery for centuries,” Archmaester Gyldayn wrote in the first volume of Fire and Blood, a Targaryen history book penned by George R.R. Martin. “We do know, however, that dragons are not horses, to be ridden by any man who throws a saddle on their back.”

According to what we know about dragon lore in A Song of Ice and Fire, as long as Jon lives, Rhaegal will not allow another human to ride him; if any tries, Rhaegal would likely kill them. (If Rhaegal dies and is resurrected by the Night King this season as he did with Viserion in season 7, that’s an entirely different story.) But if Jon dies and Rhaegal lives in Game of Thrones season 8, another rider could potentially bond with and claim Rhaegal for their own one day.

Of course, there are some exceptions to this rule as we saw in “Beyond the Wall.” As Dany arrived with Drogon, Rhaegal, and Viserion, Drogon allowed Jorah Mormont, Tormund Giantsbane, Beric Dondarrion, and the Hound all to climb onto his back without any issues at all. It’s also occurred throughout Westeros history, such as when Queen Visenya Targaryen (one of Aegon the Conquerer’s sister-wives) allowed Ronnel Arryn, the young king of the Vale, to ride her dragon Vhagar with her in exchange for Ronnel Arryn bending the knee. If a person is riding a dragon with the dragonrider, there doesn’t seem to be an issue.

What makes someone a dragonrider?

To determine just who can and can’t ride a dragon, look no further than the history of House Targaryen and their centuries-long family incest policy.

House Targaryen was one of the dragonlords of the Valyrian Freehold—noble families who had the ability to ride a dragon. Incest, whether it was siblings marrying one another, cousins, an uncle and niece, or an aunt and nephew, it was often the rule, not the exception.

“This practice went back to Old Valyria, where it was common amongst many of the ancient families, particularly those who bred and rode dragons,” Archmaester Gyldayn noted in The World of Ice and Fire. “‘The blood of the dragon must remain pure,’ the wisdom went.”

When the Doom of Valyria occurred, it wiped out every single dragonlord family except for House Targaryen, which had fled Valyria for Dragonstone 12 years prior. The Targaryens brought five dragons with them, and as House Targaryen bred more dragons and took control of Westeros, the Targaryen practice of inbreeding continued. That accomplished two things: more Targaryen dragonriders and the eventual extinction of dragons until Daenerys Targaryen hatched three dragon eggs in the flames. Even a lack of dragons didn’t stop the Targaryens from fretting about keeping their bloodline pure and continue to marry and have children with their own kin. It’s probably how Jon and Dany are even able to ride dragons in the first place.

And Dany’s first flight comes at a much more dire time than Jon’s: during an attack in the fighting pits of Meereen. After that initial flight, we don’t see her take flight again until after she kills every Khal in Vaes Dothrak.

In the show, it’s reaffirmed that riding a dragon is a Targaryen-exclusive trait.

“Only Targaryens can ride dragons and that should be a sign for Jon,” Game of Thrones showrunner David Benioff said in an Inside the Episode video for the season premiere, noting that Jon’s connection with Drogon and Rhaegal doesn’t go unnoticed by Dany.

“It’s a Jon and Dany moment, but it also seeds in the idea that these creatures that will accept Jon Snow as one of their riders,” showrunner D.B. Weiss added.

Simply put, in order to ride a dragon on your own and live to tell the tale, you need to have Targaryen blood in your veins. Dany, whose parents are both Targaryens, is suitable. And now we know that Jon—who has a full-blooded Targaryen father—is as well.

Well, unless you’re the Night King controlling an undead, fire-breathing minion. At that point, the usual rules probably don’t apply.

Not even Targaryen ancestry is a guarantee for would-be dragonriders

Having Targaryen blood may be a requirement to ride an unbonded dragon on your own, but it is not the sole qualifying factor. And to demonstrate just how it can go wrong, let me introduce you to Quentyn Martell.

Quentyn Martell is a character who we properly meet in A Dance With Dragons, but one that Game of Thrones left out completely. (Along with much of the Dorne plot.) He’s the son of Doran Martell and the nephew of Oberyn Martell, a member of House Martell who can trace his own ties to House Targaryen through a different Daenerys Targaryen, who wed Prince Maron Martell as part of a political alliance to finally get Dorne to join the rest of Westeros.

Every so often, when there wasn’t a Targaryen to wed, they would look to House Martell, with Rhaegar Targaryen and Elia Martell being the most notable example. After Robert’s Rebellion, the link between those two houses was cemented further: Oberyn Martell signed a secret pact with the man acting as Dany and Viserys’ guardian promising Doran’s eldest child, Arianne Martell (another cut book character), to Viserys Targaryen when they were of age. But because Viserys has been long dead, Doran sent Quentyn to Meereen after Oberyn’s death so they can fulfill the pact to wed a Targaryen with a Martell and take back the crown.

That doesn’t exactly work out in Quentyn’s favor. By the time he gets to Meereen, Dany is already set to wed Hizdahr zo Loraq. After Dany rejected him, he snuck into the pit where Rhaegal and Viserion were held to steal a dragon. Quentyn Martell relied on his Targaryen ancestry to tame the dragon, but it wasn’t enough: Rhaegal burned him to a crisp in the attempt, and after three days of agony, Quentyn died.

The closest we got to that scenario playing out on the show was in early season 6 as Tyrion Lannister unshackled Rhaegal and Viserion from their chains in the catacombs of Meereen; they looked like they were about to attack Tyrion but then thought better of it. And if we’re looking at full Targaryens, we imagine that none of Dany’s dragons probably would’ve let Viserys ride them.

What does that make Tyrion?

Not for the first time, Jon’s interactions with a dragon might make some fans look back at when Tyrion interacted with Dany’s dragons and wonder if he’s a secret Targaryen as well.

The theory, more or less, purports that King Aerys II Targaryen (a.k.a. Dany’s father) slept with (or raped) Tyrion’s mother Joanna (who he had a thing for) at one point while she was in King’s Landing while her husband Tywin was hand of the king; Joanna later died in childbirth. Tywin couldn’t prove that Tyrion wasn’t his, so Tywin claimed him as his own son.

The theory is a somewhat popular one, and especially when it was possible for Jon, Dany, and Tyrion to have been the three heads of the dragon that Rhaegar Targaryen once referred to in The Prince That Was Promised prophecy. But it might not hold water on the show. Tyrion has no dragon to ride for his own right now. Rhaegal and Viserion appeared to merely tolerate Tyrion for as long as it benefited them compared to the purring noises that Drogon and Rhaegal made when they saw Jon, which basically just makes Tyrion a lucky bastard. And the concept of a second secret Targaryen would be a lot to introduce this late in the game just as Jon is about to have his own identity crisis.

Do Drogon and Rhaegal know that Jon is a Targaryen?

They have to. If Jon being allowed to ride Rhaegal wasn’t enough of an indication to us that Jon is one of them, those knowing looks that they gave Jon as he and Dany made out at that waterfall got that point across.

Will Jon and Rhaegal take flight once again?

Almost certainly, and I’d bet on it. We haven’t seen them in action together during the upcoming battle in Winterfell at least in part because the show was saving that big reveal for “Winterfell.” But why introduce the triumphant moment of a secret Targaryen riding a dragon in the final season of Game of Thrones if you’re not gonna have him pay that off later?