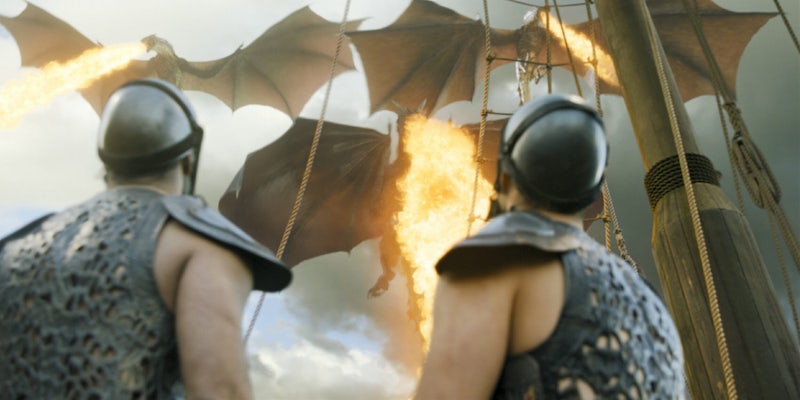 How the Dance of the Dragons tore Westeros apart

The massive civil war helped set the stage for ‘Game of Thrones.’

The arrival of Daenerys Targaryen’s three dragons at the end of Game of Thrones’ first season changed everything, but as huge of a reveal it was for us, it was even a bigger shock in the world of Westeros and Essos. After all, none of them had seen a dragon in their lifetime, largely because of the Dance of the Dragons.

In modern-day Westeros, explored in Game of Thrones and A Song of Ice and Fire, the Dance of Dragons—a Targaryen civil war that took place more than 150 years before Game of Thrones began—has little effect on day-to-day life. It’s ancient history, and since then several generations have lived, fought together and against one another, and died. (In fact, an entirely new family now sits the Iron Throne.) But the ramifications of that war, one that only lasted a couple of years, were felt on Westeros for decades to come, lead to the extinction of dragons, a fracture of House Targaryen, and maybe even a sign of what was to come in the books, the final season, and potentially even a successor show.

As one of the more significant events in Westerosi history, we know far more about it than most events, but even by George R.R. Martin’s standards, that still amounts to very little. Outside of casual mentions in ASOIAF, he’s covered the territory in The World of Ice and Fire and two novellas that have appeared in fantasy anthologies: The Princess and the Queen and The Rogue Prince. Game of Thrones even included an animated retelling of the Dance of the Dragons in the season 5 Blu-ray set.

We’re still a ways off until we see the Dance of the Dragons play out in the first volume of Fire and Blood, but there’s still plenty to explore in one of Martin’s richer explorations of Westerosi history, as well as what it could mean for the stories to come.

Why is it called it the Dance of the Dragons?

The Dance of the Dragons (or the Dance of Dragons, as it’s referred to on Game of Thrones) isn’t so much a dance—physical or political—but rather a raging and deadly civil war between two Targaryen siblings that trickled down to the rest of Westeros as other houses were forced to choose sides. The “Dragons” named in the dance is one with a double meaning: “Dragons” is not only a shorthand way of referring to the Targaryens, but it also refers to the dragons that many of the Targaryens used in their battles or were caught in the middle of human crossfire.

While an in-universe explanation for the name isn’t explicitly given, Game of Thrones offers a plausible explanation for the name. Season 7’s “Stormborn” features a conversation between Samwell Tarly and Archmaester Ebrose in the Citadel’s massive library as Ebrose gathers books to fuel his research. Samwell isn’t too keen on the title (the “Dance of Dragons”), noting that he’d call it “possibly something a bit more poetic.” It’s possible that the name of the civil war could have come from The Dance of the Dragons, A True Telling by Grand Maester Munkun, which exists in ASOIAF and Game of Thrones and may not be a completely accurate account; it’s stylized as The Dance of Dragons in the latter. The phrase “danced with dragons” is also reportedly used in a letter written by a Martell.

It’s the book that Shireen Baratheon reads in the season 5 episode “The Dance of Dragons” and later discusses with both Davos Seaworth and her father Stannis. While Davos approves of the title, Stannis is perplexed to why it was called a dance, noting that it “doesn’t make much sense”—even as he’s faced with having to sacrifice his daughter.

And in the season 5 Histories & Lore featurette (which are traditionally read in-character by several cast members) on the Dance of the Dragons, Daenerys Targaryen’s older brother Viserys snidely notes that it’s a “stupid name for a Targaryen civil war where my ancestors danced away my birthright.”

What started the Dance of the Dragons?

The Dance of the Dragons began—like many of the Targaryens’ bouts of in-fighting over the years—with a question of which Targaryen was supposed to be on the Iron Throne.

While the Targaryens’ long history of incest often proved to be a problem as far as inheritance was concerned, it had been largely dealt with. With no clear heir to long-reigning king Jaehaerys I Targaryen, the Great Council of 101 AC (After the Conquest) was held to choose his successor. After much deliberation, Jaehaerys I’s grandson Viserys I Targaryen was picked to succeed Jaehaerys I over Laenor Velaryon (who had a claim through his mother), but it also set a precedent for inheritance, according to TWOIAF: “regardless of seniority, the Iron Throne of Westeros could not pass to a woman, nor through a woman to her male descendants.”

Then Viserys I chucked precedent in the bin by naming his daughter Rhaenyra his heir after the death of his wife and son within a day of each other. There was an official ceremony and everything, but it didn’t resolve itself that easily. Viserys I remarried and had several children with his second wife, Alicent Hightower, the eldest who was named Aegon. Despite now having sons, Viserys I kept Rhaenyra named as his heir.

A rift between Rhaenyra and Alicent had been growing for some time. They didn’t get along, and Rhaenyra’s son fought Aegon’s brother as they both sought to claim a dragon after the death of a relative, resulting in the latter getting stabbed in the eye. And when Viserys I died in 129 AC, the small council—who learned of Viserys I’s death by Alicent—put Aegon on the throne while Rhaenyra remained in the dark about her father’s death. The small council argued that they didn’t agree to make Rhaenyra heir in the first place while Aegon was convinced that his mother, wife, and children would all be dead if his half-sister took the throne instead of him.

Rhaenyra, who had gone into labor and gave birth to a stillborn daughter upon learning what happened, didn’t take it lightly. She was crowned queen by her own appointed council and wanted revenge, calling her stepmother a traitor. Likewise, Aegon, now called Aegon II Targaryen, dubbed Rhaenyra and her second husband, her uncle Daemon Targaryen, to be traitors.

What side were the other great houses of Westeros on in the Dance of the Dragons?

Like many a major Targaryen-fueled war, the Dance of the Dragons threatened to tear Westeros apart at the seams. Not every family became involved, and not every family who played a part was still around by the time Game of Thrones began.

House Lannister and House Baratheon both fought for Aegon II Targaryen. House Arryn and House Velaryon both had ties to Rhaenyra Targaryen and fought on her side; Rhaenyra’s mother was an Arryn while her three eldest children were Velaryons. House Tarly and House Greyjoy also took Rhaenyra’s side.

House Stark also supported Rhaenyra, but that was the result of an agreement known as the Pact of Ice and Fire: For House Stark’s support in the Dance of the Dragons, a Targaryen princess would eventually marry into House Stark. And while the inverse, a Stark marrying a Targaryen prince, played out with Jon Snow’s parents, Jon and Daenerys could potentially fulfill that pact more than 100 years after it was made in Game of Thrones season 8.

House Martell stayed out of the fight, as Dorne was not yet part of the Seven Kingdoms. But that doesn’t mean that both sides attempted to curry favor with Dorne.

“Dorne has danced with dragons before,” Prince Qoren Martell reportedly wrote, according to TWOIAF. “I would sooner sleep with scorpions.”

What resulted from the Dance of the Dragons?

The Dance of the Dragons didn’t last that long—only two years—but the damage it caused to the Targaryens, their dragons, and the Seven Kingdoms was insurmountable.

Despite launching wars to fight for the throne, neither would-be monarch ever got to keep it; they both died during the dance. Rhaenyra was fed to her own dragon by Aegon II while Aegon II was mysteriously poisoned. Rhaenyra and Aegon II Targaryen both lost children and their spouses during the war; Rhaenyra lost all three children from her first marriage while Aegon II lost two sons; only Rhaenyra’s two sons from her second marriage and Aegon II’s only daughter survived the carnage. They lost countless relatives along the way.

They also lost nearly all of Westeros’ dragons, with only four dragons—one that was born during the Dance—surviving the war. Several died in combat against other riders and their dragons while others were killed by humans. Approximately 20 years later, dragons would disappear from Westeros as the sickly last dragon died.

In the end, Rhaenyra’s son Aegon was crowned Aegon III Targaryen, but the shadow of the Dance weighed heavily on his reign. It further set the precedent that Targaryen women could only inherit the crown after all of the men in the family because of the destruction Rhaenyra, a would-be queen, brought onto Westeros.

It’s hard to say how much of this—if any of it—will factor into Game of Thrones, but season 8 sets up a precarious situation. In one corner, you have Daenerys Targaryen, the last known Targaryen who’s come back to Westeros to claim her birthright. In the other is Jon Snow, the legitimate and only surviving son of Prince Rhaegar Targaryen, the heir to the Iron Throne up until his death. (That’s not even including the presence of Young Griff, who might be Rhaegar’s son Aegon, in the books.) They have two dragons, and chances of Jon riding one of them next season is very likely.

If Jon and Daenerys both survive the Night King and they aren’t able to arrive at the simple solution next season, things might possibly get ugly as the Seven Kingdoms begins to heal.