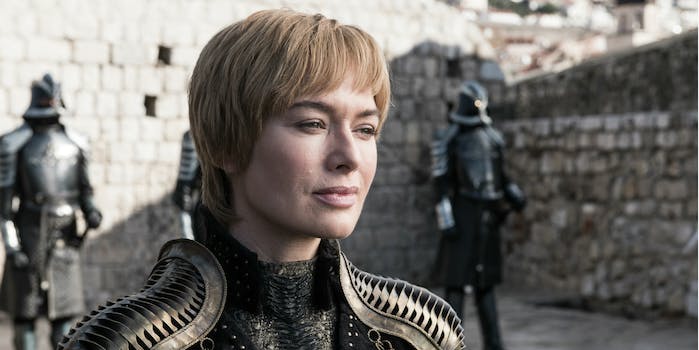 What is the Golden Company, Cersei’s new mercenary army?

'I was told the Golden Company had elephants.'

In Sunday’s premiere episode of Game of Thrones season 8, fans got plenty of new material to fuel discussions for the next week. We finally saw the Stark reunion we’ve been waiting for. Daenerys and her dragons reached Winterfell, we saw our first named character death of season 8, and Cersei bedded someone she’s not related to—for once. Midway through the fast-paced episode, we were also introduced to the extremely punchable face of Harry Strickland. His arrival, along with hundreds of his fellow sellswords, had fans wondering what exactly the Golden Company is.

And where are those damn elephants?

What is the Golden Company?

The Golden Company is a collection of skilled sellswords operating in Essos. Their stellar reputation makes them one of the most prominent mercenary groups in operation. Consisting of at least 20,000 men plus horses and elephants, the organization is primarily composed of warriors who have been exiled following one war or another. Though the company is comprised primarily of Westerosi men, recruits come from all corners of the world.

Founded a century before the events of Game of Thrones, the Golden Company grew to become the most respected mercenary group in the Free Cities. It was founded by the supporters of House Blackfyre—a house descended from the Targaryens—after a failed rebellion. After their rebellion failed, Blackfyre supporters fled to the Free Cities, where they languished in exile for decades. The families that grew from these deserters were trained and initiated into the Golden Company’s ranks.

The company has a reputation for never breaking a contract. It’s this reputation that has allowed the Golden Company—currently led by the aforementioned Harry Strickland—to find such success.

Previous mentions of the Golden Company

Game of Thrones fans may recall a season 4 conversation between Stannis Baratheon and his loyal hand Davos Seaworth. Ser Davos suggested that Stannis consider hiring the Golden Company to assist in his quest to seize the Iron Throne. Believing sellswords to be a distasteful choice, Stannis ignored Davos’ advice.

The Golden Company was mentioned in another season 4 conversation, this time between Daenerys and her forever friend-zoned protector Jorah Mormont. Jorah—probably a bit salty about Dany’s poorly concealed relationship with Daario—advised Dany against trusting a sellsword. Dany noted that Jorah was once a sellsword himself. He fought for the Golden Company before pledging his sword to Viserys.

A final conversation about the Golden Company transpired late in season 7. Cersei announced her plans to hire the mercenaries as a bolster to the Lannister troops—which, you might recall, hit a bit of a snag when Dany decimated them in The Spoils of War. In season 7’s final episode, Cersei admits to Jamie that Euron Greyjoy—under the guise of fleeing the Night King—was actually headed to Essos to gather her new army of mercenaries.

Cersei’s hired army arrived in King’s Landing very early in season 8. Upon meeting with Strickland, Cersei discovered that her army is now bolstered by an additional 20,000 troops and 2,000 horses. She was disappointed to discover that the Golden Company’s elephants—an addition she was anticipating—are not moveable by ship and therefore unavailable in Westeros.

Cersei has not revealed her intentions for the Golden Company, but she did hint toward her plans at the end of season 7. She told Jamie of Euron’s secret quest to retrieve her sellsword troops. “He is going to ferry the Golden Company back here to help us win the war for Westeros,” she said. Her intent appears to be to employ her mercenaries to take the lands neglected by those houses distracted by the threat to the north. In Cersei’s mind, her enemies will return to their homes following the war with the White Walkers, only to find them lost to the might of the Lannisters.

It’s not a bad plan if you ignore the insanity of it all. Obviously, indulging petty squabbles when there is a literal zombie army knocking down your door makes no real sense. Cersei’s plan to strike while her enemies are distracted, however, does. If not for the world-ending threat, Cersei’s plan would have the potential to completely reshape Westerosi politics. There are already a number of houses that have been completely wiped out, thanks to the war. With Cersei’s new army, she could eliminate any remaining threats. That would leave her free to wait and watch the events in the north unravel, ultimately setting the stage for her complete domination.

Unfortunately for Cersei, that is not how events will unfold. Her blatant refusal to accept the threat the White Walkers present will likely be her downfall. Either that, or her gradual alienation of everyone that used to care for her. We can’t know for sure how things will transpire, but events in Game of Thrones rarely go as planned.

The Golden Company will surely have a big part to play before Game of Thrones concludes. The impressive mercenary group already made the journey to Westeros but likely did so without knowledge of the threat slowly inching southward. When they find out about the White Walkers, they may be less inclined to assist Cersei in achieving her comparably minor goals.

Instead, what if the Golden Company were to join forces with our heroes fighting to the north? There is certainly no promise that they will do so, but when faced with the end of the world, the actions of men can be hard to predict. If these legendary mercenaries did join the final fight, it would certainly be a massive boost to the living army.

If they choose to stick with Cersei, however, the Golden Company could spell disaster for our heroes to the north. Though they’ll have fair warning of Cersei’s betrayal, thanks to Jamie, our heroes are singularly focused on the White Walker threat. There are no additional troops to spare for border squabbles or Cersei’s scheming. If Cersei decides to send her mercenaries to engage the northerners, Jon and Dany’s forces will have nowhere to retreat.