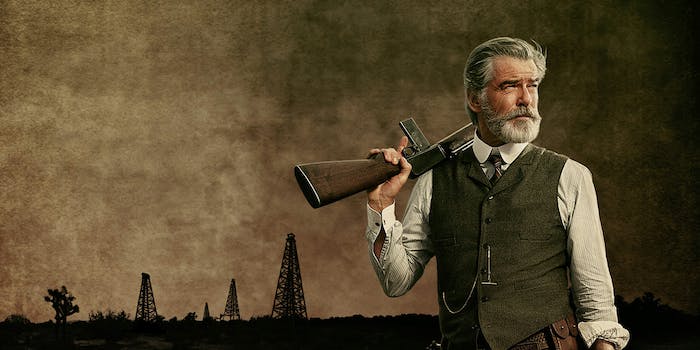 How to watch ‘The Son’ for free

In the McCullough clan, the truth is relative.

The Son stars Pierce Brosnan as Eli McCullough, a Texas cattle baron with a dark past, who in 1915 seeks to make his bones in the budding oil industry. The series explores a family dynasty from many perspectives and this country’s shaky relationship with war and violence.

The Western explores the creation myth of the U.S. It’s based on the best-selling book of the same name, written by legendary author Philipp Meyer, also known for the modern literary masterpiece American Rust.

Despite mixed reviews, you cannot deny Brosnan’s talent in the series. While we’re used to seeing him in a more suave setting, the award-winning actor rocks a 10-gallon hat and portrays the same Bond charm in a Wild West setting. Unfortunately, McCullough’s odyssey will wrap up with the second and final season.

Here’s how to watch The Son online for free.

When does The Son air?

The final season of The Son premieres on Saturday, April 27 at 9pm ET. New episodes will air following Saturdays at the same time.

How to watch The Son online for free

The following live TV streaming services offer AMC as part of their channel suite. Each one comes with a seven-day free trial so you can watch The Son season 2 for free. There are variations between the services, so pick one that suits your streaming needs and budget. Be sure to check compatibility with your preferred device before signing up.

For a more à la carte service, look to Sling TV. It offers two cable packages, Sling Orange and Sling Blue, both of which cost $30 per month. AMC is available in both packages. If you grab them both (Sling Orange + Blue) you can save $10 per month. Sling Blue offers more bang for your buck with over 40 channels, including sports necessities like FS1, NBCSN, and NFL Network. You’ll also gain access to the usual cable mainstays like Food Network, Discovery, Cartoon Network, SYFY, and FXX. Here’s the complete guide to Sling TV channels.

Philo is the least expensive streaming service, but it has some limitations. You won’t find the sports channels that dominate other packages or local channels. However, it’s the cheapest way to gain access to AMC at only $20 a month. You will also find the best deal on popular channels like Animal Planet, IFC, AMC, Lifetime, and even deep cuts like ID. You also get free cloud DVR, but shows recorded are deleted after 30 days, so binge responsibly.

YouTube TV is a great solution for families because one subscription can add up to six accounts. Each account comes with unlimited cloud DVR. There are sports channels like NBCSN, NBA TV, and four ESPN channels. Disney, Disney XD, Disney Junior, and Cartoon Network will keep any kid (or kid at heart) busy for hours. It also comes with a few Spanish-language channels like Telemundo and NBC Universo. AMC is, of course, included. You’ll get other great channels like BBC America, and IFC, so you won’t miss out on all that prestige TV. (You can find the full list of YouTube TV channels here.)

How to catch up on The Son episodes

If you’re looking for a place to catch up on older The Son episodes, there are a couple of solutions.

AMC Premiere works a bit differently from the typical on-demand channel service. You can watch AMC shows as soon as they are without commercials, along with exclusive content and behind-the-scenes footage. However, you need to have a cable or live TV streaming subscription to join, plus pay an additional $4.99 a month. If you’re addicted to The Son, Better Call Saul, and The Walking Dead, it may just be worth the price for you.

If you missed out on the first season of The Son, you can buy episodes on Amazon Video. Single episodes start at $1.99, but you can get an entire season for $24.99. Episodes from season 2 are also available for purchase after they air.