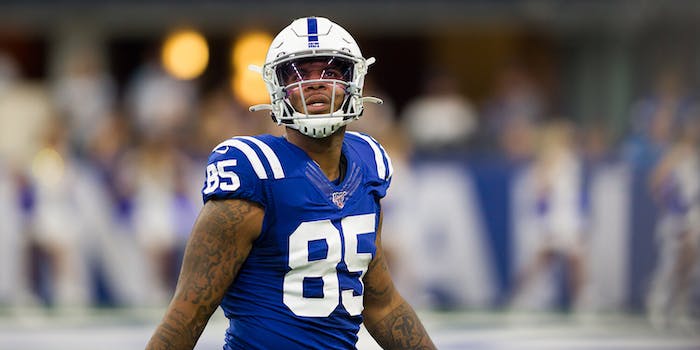 How to stream Texans vs. Colts in Week 7

The Colts look to upset the Texans and take control of the AFC South.

No one expected much of a competition in the AFC South, but here we are.

The Houston Texans have established themselves as one of the best teams in the NFL with a series of commanding victories, culminating in a win over the Chiefs last week. For their part, the Indianapolis Colts have also knocked off the Chiefs, and started the season surprisingly strong despite Andrew Luck’s surprise retirement.

Indy isn’t perfect at any position, but they seem to do everything well enough to win. The defensive line stepped up for them against the Chiefs, while safety Khari Willis has been a lifesaver in previous weeks. The Colts entered their bye at 26th in defensive DVOA, but they have stepped up when it matters.

Similarly, the offense doesn’t put up gaudy numbers, but continues to produce. Marlon Mack has been a gem for the Colts, averaging almost 100 yards a game. Receiving has been a group effort, but T.Y. Hilton and Zach Pascal have been productive enough to keep things rolling.

Where the Colts have been fine on offense, the Texans have been phenomenal. Deshaun Watson’s strong passing, coupled with Carlos Hyde’s resurgent running game, has made this offensive attack too much to handle for most NFL teams.

Though the Texans offense gets the most coverage, their defense has played well so far as well. No, the unit hasn’t been flashy, but solid man coverage and disciplined secondary play have limited offensive opportunities for opponents.

In weeks where Watson throws for 400 yards or Hyde runs for 100, pretty good defense will go a long way.

The Texans have the clear edge here, but never put it past the Colts to find a way to another upset.

There are a number of options for watching Colts vs. Texans on streaming platforms that carry CBS. However, consult a coverage map to see what game your regional channel will be playing.

Texans vs. Colts live stream: How to watch NFL online

Carlos Hyde, Running Back: At the beginning of the season, this looked like a 50-50 platoon with Duke Johnson. While Johnson is still vulturing carries and touchdowns, Hyde has emerged as the lead back here. The Colts are soft against the run, so Hyde is at least a flex this week.

Marlon Mack, Running Back: It feels like we only ever talk about Mack on this team, but no one else has emerged as a surefire fantasy starter. The receivers have been dependable, but there has been a different top pass catcher in Indy in three of the last four weeks.

Houston Texans vs. Indianapolis Colts: Why it matters

The Texans are the clear favorite in the AFC South, and if they win here, they cement that status. It’s hard to imagine the Jaguars or the Titans catching up to either of these teams, so the Colts are all that stands in their way.

The Texans also look to be in good position to grab a playoff bye if the Chiefs continue to slip in the coming weeks.

For the Colts, a wild card slot is a real possibility, and they could keep the Texans honest in the division. They are not a perfect team, but all that matters is Ws and Ls.

If this Texans offense is its usual self, it is tough to imagine Jacoby Brissett’s offense keeping pace. But, if this game slows down a bit and it becomes all about Marlon Mack, maybe the Colts have a chance.

Houston has the advantage here, but a team that lost to the Panthers and almost lost to the Jags could definitely fall to the Colts.