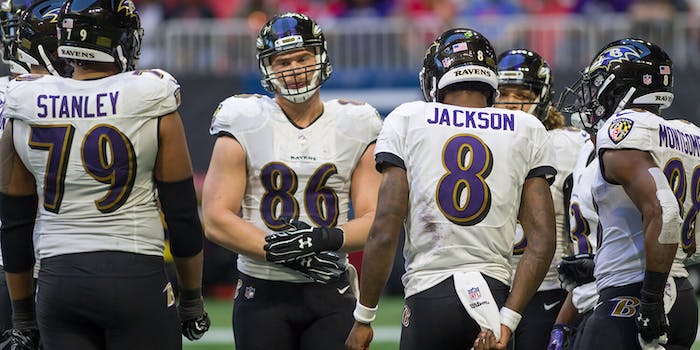 How to stream Steelers vs. Ravens in NFL Week 5 action

Pittsburgh an Baltimore will clash in a tough AFC North battle.

The Steelers finally got their first win in Week 4, but the road to win number two will be much harder.

On Monday Night Football, the Pittsburgh Steelers crushed the Bengals for their first victory of the year. This week, the Baltimore Ravens come to town, hoping to rebound from a brutal division loss to the Browns.

Pittsburgh’s defense looks good this year, and against the Bengals they were spectacular. Eight sacks rattled Andy Dalton as he was limited to 171 yards in the air, and the offense gained only a paltry 4 yards on the ground. Young stars like Devin Bush, T.J. Watt, and Minkah Fitzpatrick are setting up the core of a defense that could dominate for years to come.

Even in a convincing victory, the Pittsburgh offense was still just fine. While Mason Rudolph only threw four incompletions, he only produced 229 yards passing. Rudolph’s completions are often short and sloppy, and it’s hard to see him as Big Ben’s long-term successor right now.

It’s difficult to tell where the Steelers will go from here. It’s equally challenging to evaluate the Ravens.

After a stellar start, Baltimore is on a two game skid. But, even in those losses, the rushing game has clicked and Lamar Jackson is obviously improved over last year. Mark Ingram has been rejuvenated behind the Ravens O-line and Baltimore’s young receivers continue to show promise.

While the Ravens offense is more productive than last year, the defense has taken a step back. The secondary has been soft outside of Marlon Humphrey and the run defense has gotten run over the last two weeks.

Even if Baltimore’s offense looks good, they aren’t always effective in passing situations. Against good teams, poor passing and a weak secondary is a terrible combination.

It remains to be seen if Pittsburgh can become a good team. One good week against the Bengals isn’t enough to wash away the dismal start to the season and Mason Rudolph’s inexperience.

The Ravens have the advantage here, but both of these teams could stand to improve in a wide open AFC North.

There are a number of options for watching Steelers vs. Ravens on streaming platforms that carry CBS. However, consult a coverage map to see what game your regional channel will be playing.

Steelers vs. Ravens live stream: How to watch NFL online

James Conner, Running Back: Even when QB Mason Rudolph is inconsistent, Conner tends to get yards on the ground and through the air. Look for Baltimore’s soft run defense to make him look like a star.

Mark Ingram II, Running Back: While we have loved Marquise Brown all season, we have our doubts about Baltimore’s pass catchers against this secondary, especially if Lamar Jackson gets consistent pressure. The Bengals couldn’t run against the Steelers, but other teams have had no problem gaining yards on the ground. Look to the Baltimore run game here.

Steelers vs. Ravens: Why it matters

There is no clear leader in the AFC North. The Browns, led by an up-and-down Baker Mayfield, currently sit at the top of the division. In other words, it’s a division open for the taking.

While the Ravens are probably the most consistent team in the AFC North, the Browns and Steelers can hang with them on a good week.  This likely won’t be one of the strongest divisions in football, but it could be one of the most exciting.

Any division game has playoff implications. This one definitely has the potential to come back to haunt the Ravens if they let it slip away.

If the Ravens take care of business, however, the loss to the Browns could quickly become a distant memory.

Look for the Ravens to win here, but it might not be as easy as we might have thought a week or two ago.