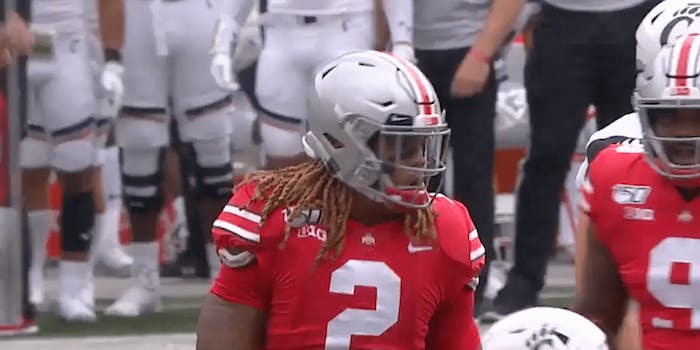 Ohio State vs. Wisconsin: How to stream the Big 10 championship game

No. 1 Ohio State Buckeyes vs No. 8 Wisconsin Badgers

In a battle for the Discover Big 10 Championship, No. 1 Ohio State Buckeyes (12-0, 9-0 Big 10) and No. 8 Wisconsin Badgers (10-2, 8-2) square off in an anticipated rematch at Lucas Oil Stadium in Indianapolis, in a prime-time Saturday night showdown.

The Buckeyes come in perfect on the season after their dominating 56-27 win over Michigan. The Badgers knocked off then-No. 8 Minnesota, 38-17 in a crucial road win. Ohio State already owns a win over Wisconsin–a misleading 38-7 victory on Oct. 26 in Columbus. Ohio State led only 10-7 in the third quarter in a virtual stalemate, then turned on the turbo jets down the stretch to reel off 28 unanswered points.

The keys for each team lay in the run game. Badgers running back Jonathan Taylor ranks only behind Oklahoma State’s Chuba Hubbard with 1,761 yards, but his two previous games versus Ohio State have been unmitigated disasters. Though not an apples and oranges comparison given Ohio State has Chase Young on its defensive line, OSU running back J.K. Dobbins, on the other hand, has dominated the Badgers.

For Wisconsin to have any shot–given the Buckeyes likely won’t start as slowly–they will need Taylor to equal Dobbins, no matter the yardage total. Even then, it may not be enough.

How to stream Ohio State vs. Wisconsin live: Watch the Big 10 championship

Ohio State vs. Wisconsin: What to watch for

What else is there to watch for besides Chase Young, the most dominant defensive player in high Division I football in a decade? He’s an almost perfect player–he can play off the edge as a down lineman, or anywhere in the box as a stand-up rusher. He can play through speed or bull-rush power. He’s got tremendous technique, shifty hands, and footwork. Wisconsin head coach Paul Chryst will need to limit Young in whatever way possible.

He's the ninth @OhioStateFB player to claim the honor in the last 18 years. pic.twitter.com/dv021FDSkz

On the flip side, Ohio State star quarterback Justin Fields is nursing a knee injury, for which he’ll continue wearing the brace he wore to finish the Michigan win last Saturday. The Badgers would do well to apply pressure and put some doubt in the Big 10 offensive player of the year’s mind.

Bettors have Ohio State as a 16-point favorite, according to Odds Shark. Wisconsin will need some special teams plays and an offense that finishes with touchdowns and not field goals.