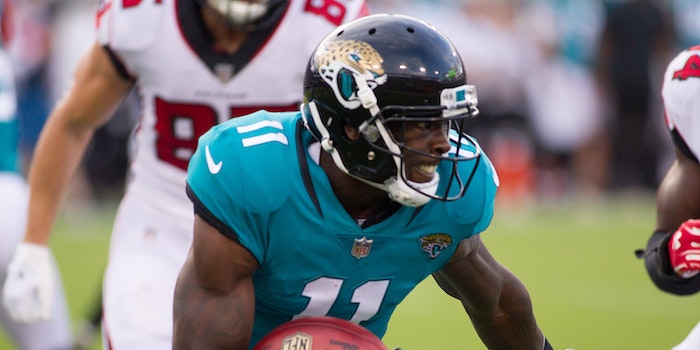 How to stream Jaguars vs. Bengals in Week 7

The struggling Jaguars will look to rebound against a weak Bengals team.

The Bengals are the bad team that other bad teams want to play.

Though the Jacksonville Jaguars aren’t a great squad, the Jags have been fun to watch and competitive. The Cincinnati Bengals have been neither fun nor competitive, as they have opened the season 0-6. After two tough losses in a row, Jacksonville will look to turn things around against a truly terrible Cincinnati team.

The story of Jacksonville’s season has been quarterback Gardner Minshew. The former backup QB has impressed Jags fans in relief this season, but that doesn’t mean he has been a star on the stat sheet. He’s averaged a pedestrian 240 yards per game passing, and is coming off of a season-low 163 passing yards against the Saints last week. He has had flashes of brilliance, but only flashes.

The defense has also had its ups and downs. Jacksonville held Alvin Kamara to 31 yards on the ground last week and only allowed the Saints 13 points. However, just one week before, Christian McCaffrey helped the Panthers tear it up.

Though the Jaguars have 19 sacks so far this year, they have struggled to force turnovers. This D does some things well, but doesn’t dominate.

While the Jaguars have bright spots here and there, the Bengals have had nothing to be proud of in 2019. Cincy’s offense has been awful. Most NFL fans can’t name a Bengals receiver—other than A.J. Green, who has been out with injury all year—and for good reason. The running game has struggled as Joe Mixon has yet to develop into anything resembling a number one back.

The Bengals cannot stop the run, allowing a historic 152 yards rushing to Raven QB Lamar Jackson last week. They also can’t stop the pass. They’ve only had more than one sack in one game this year, as opposing quarterbacks look like all-stars against this bad defense.

Andy Dalton’s Bengals have long been mediocre, and even awful, but this may be their worst squad in memory. Gardner Minshew isn’t a world-beater, but he, like everyone else, should be able to beat the Bengals.

There are a number of options for watching Jaguars vs. Bengals on streaming platforms that carry CBS. However, consult a coverage map to see what game your regional channel will be playing.

Jaguars vs. Bengals live stream: How to watch NFL online

If you’d like to watch live NFL games directly from your PS4, PlayStation Vue is your best bet. PlayStation also works with streaming devices like Roku and Amazon Fire products, but what separates PlayStation from the rest of the streaming services is that it’s also compatible with Kodi. No matter how you stream the Jaguars vs. Bengals, you’ll get to choose from four tiers of channels—all but the cheapest include NFL Network. From there, you can also add NFL RedZone as part of the $10-per-month Sports Pack, which also unlocks ESPN Bases Loaded, ESPN Classic, Longhorn Network, Outside TV, and NBCUniversal regional sports networks. You can see the full list of PlayStation Vue channels here. Two other great perks: You can stream on up to five devices at once, and there’s also unlimited cloud DVR.

DJ Chark, Wide Receiver: Chark seemed to be breaking out before he got lost among the Saints defense last week. Chalk that up to the great Saints unit. Send him out as a flex this week against a bad Bengals team. There should be enough yards here that Chark and Leonard Fournette can both have great games.

No One: You might be tempted to start Auden Tate after his 91-yard day last week. But then, you might have been tempted to start Tyler Boyd after his 123-yard day the week before. With John Ross on IR, no one has emerged as a fantasy starter on this team, and Green’s at least another week out from making his season debut. Stay away if you can.

Jacksonville Jaguars vs. Cincinnati Bengals: Why it matters

That being said, this game does matter to the Jaguars. Jacksonville was last in the AFC South last season, and even with Nick Foles injured, you could see Doug Marrone and company on the hot seat if this team falls apart.

Minshew is playing to set the tone for the rest of his career. Does he become a journeyman next year or does some team take a chance on him as a starter? Every start could impact his value in 2020.

The game matters for the Bengals insofar as how many people get fired at the end of this awful season and how quickly the Andy Dalton era finally comes to an end.

This game could get ugly, but it could also be the centerpiece of Minshew’s highlight reel. Even if you won’t be watching, you can rest assured Minshew’s agent will be.