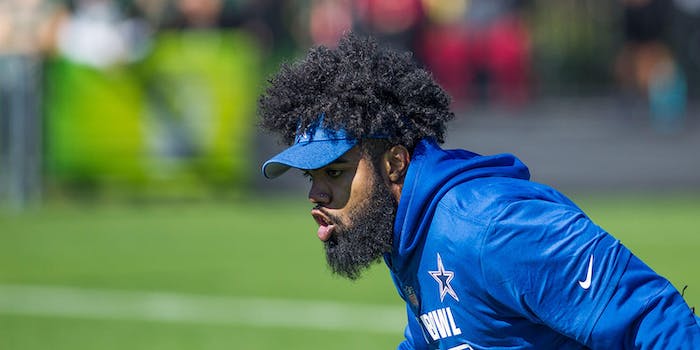 How to stream Cowboys vs. Saints on Sunday Night Football

The Drew Brees-less Saints team will face their biggest challenge yet against the high-flying Cowboys offense.

How far can this Saints team go without Drew Brees?

Last week, the New Orleans Saints pulled off a convincing win against Seattle, but against the Dallas Cowboys, they will have their biggest challenge yet.

Teddy Bridgewater has performed admirably so far subbing for Brees and may spend as long as six weeks starting in New Orleans. The Saints’ strategy seems to be avoiding asking too much of Bridgewater while winning with star running back Alvin Kamara.

Kamara had over 150 total yards and two touchdowns last week. So far so good.

The other units on the Saints have also stepped up in Brees’ absence. Excellent special teams play and a strong pass rush helped boost New Orleans over Seattle last week. Thomas Morstead may be the best punter in the NFL, which makes a difference at a time when this team needs all the help they can get.

Though things have gone well for the Saints so far, it’s hard to imagine a game managing strategy paying off against this Cowboys team. Even if Drew Brees were healthy, this would be a difficult game for New Orleans. Without him, it is hard to imagine them coming out on top.

Dallas has started the season by crushing weak opponents. Every week, the Cowboys have topped 30 points. Prescott is averaging over 300 yards a game. Elliot has topped 100 yards rushing in two of first three weeks.

On defense, the Boys have been good enough. Jaylon Smith led a decent defensive unit with 10 tackles and a forced fumble against Miami. Nonetheless, Dallas should have been able to get to Josh Rosen more often. If the pass rush stays soft, it could be a liability.

Teddy Bridgewater, however, is not a world-beater. If the defense turns in another okay performance Sunday night, it should be enough to allow Dak and company to build a comfortable lead.

Amari Cooper, Wide Receiver: Cooper is the number four wide receiver in the entire league through three games. While Dallas has played soft competition, Cooper should be an every-week option in any league.

Alvin Kamara, Running Back: Obviously, you are starting Kamara. But we list him here, because with Bridgewater under center, it is hard to tell who else will be reliable from week to week. Michael Thomas was quiet last week, and while it is often the case that back-up quarterbacks rely on tight ends, Jared Cook hasn’t been a great option so far.

Cowboys vs. Saints: Why it matters

The Saints have to stay afloat until Drew Brees recovers from surgery. The win last week against the Seahawks was impressive, but a victory in Week 4 is going to be tough to pull off.  New Orleans has a softer schedule going forward, but games against the Falcons and Jaguars look harder than they once did with Bridgewater at the helm.

If you are New Orleans, you want to see Brees come back to a team that is at least at .500.

As the NFC East looks softer and softer, this isn’t exactly a must-win for the Cowboys. However, when your sights are set on a playoff bye week, every game matters. If Dallas wants to maintain dominance in the NFC, they need to stack wins and leave teams like the Rams and the Packers in the dust.

Expect the Cowboys to beat the Saints, but if the Dallas defense looks a little softer than usual, this game could be competitive. If this one comes down to the wire, we might see that the soft early schedule created a false sense of security in Dallas.