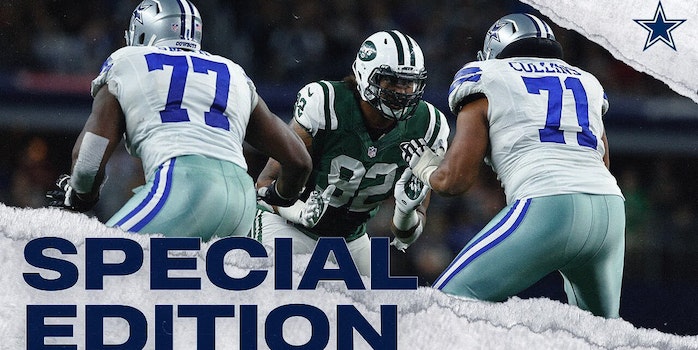 How to stream Cowboys vs. Jets in NFL Week 6

The Cowboys will look to get back on track against a weak Jets squad.

It’s been a long two weeks for the Dallas Cowboys, but it’s going to be a very long season for the New York Jets.

Following the first few weeks, it looked like the Cowboys might have the league’s best offense. Now that the team has suffered consecutive losses to the Saints and Packers, people are wondering if Dallas might be a pretender.

Though Dak Prescott threw for 463 yards playing from behind last week, he also threw three interceptions. Those numbers, padded by garbage time, don’t quite reveal the truth: He has struggled these last two weeks. Ezekiel Elliot, who often gives the Boys’ offense a boost, has also been off, posting mortal totals of 62 and 35 yards on the ground.

The offense in Dallas seems like it will recover and has had positives in these losses. The defense, however, might be in real trouble. In terms of DVOA, the Cowboys went into Week 5 ranked third. But it now seems that ranking was premature. The defensive line couldn’t stop Aaron Jones, for instance. Linebackers couldn’t get any pressure. The secondary got beat early and often. Is this how this D is going to look against good QBs?

Luckily for the Cowboys, there is no better team to get right against than the New York Jets. Along with the Dolphins, the Redskins, and the Bengals, the Jets are one of few teams that could lose every game.

New York has been blown out terribly in their last three games, and without Sam Darnold, they look completely lost on offense. Filling in at quarterback, Luke Falk went 15 of 26 for 120 yards and two interceptions.

Quarterback is just one of this team’s problems. The Jets may get Darnold back for the Cowboys game, but Dallas still shouldn’t be afraid. The O-line allowed 10 sacks last week. The Jets D came away with zero sacks and zero picks. Nothing is happening on offense that isn’t named Le’Veon Bell.

Even if Darnold is back, Dallas should cruise here and get their season back on track.

There are a number of options for watching Cowboys vs. Jets on streaming platforms that carry CBS. However, consult a coverage map to see what game your regional channel will be playing.

If you’d like to watch live NFL games directly from your PS4, PlayStation Vue is your best bet. PlayStation also works with streaming devices like Roku and Amazon Fire products, but what separates PlayStation from the rest of the streaming services is that it’s also compatible with Kodi. No matter how you stream the Cowboys vs. Jets, you’ll get to choose from four tiers of channels—all but the cheapest include NFL Network. From there, you can also add NFL RedZone as part of the $10-per-month Sports Pack, which also unlocks ESPN Bases Loaded, ESPN Classic, Longhorn Network, Outside TV, and NBCUniversal regional sports networks. You can see the full list of PlayStation Vue channels here. Two other great perks: You can stream on up to five devices at once, and there’s also unlimited cloud DVR.

Michael Gallup, Wide Receiver: Coming off of his recent injury, Gallup was expected to ease his way back into action. Languishing on many teams’ benches, he went for 113 yards and a touchdown last week. Don’t make the same mistake again. This offense can sustain two fantasy receivers, and Gallup is good to go as a WR 2 or a flex.

Le’Veon Bell, Running Back: Bell is the only startable Jet, and while you are likely playing him, you are probably regretting taking him in the first round. The rest of this Jets team is weighing on him like an albatross wrapped around his fantasy production.

Dallas Cowboys vs. New York Jets: Why it matters

This game couldn’t be coming along at a better time for the Cowboys. They just dropped two games to a pair of the league’s best teams. Last week, the Packers’ running game crushed them. The week before, the Saints defense manhandled them. The Jets can only dream of such things.

If Sam Darnold is back and playing well (two big ifs), maybe this game could be compelling at moments. Perhaps the praise for the Cowboys was too intense after three commanding victories to start the season. But, just the same, the criticism of them these last weeks has probably been too harsh.

Look for Dak Prescott and company to get their groove back against a sorry Jets squad that is already dreaming of high draft picks.