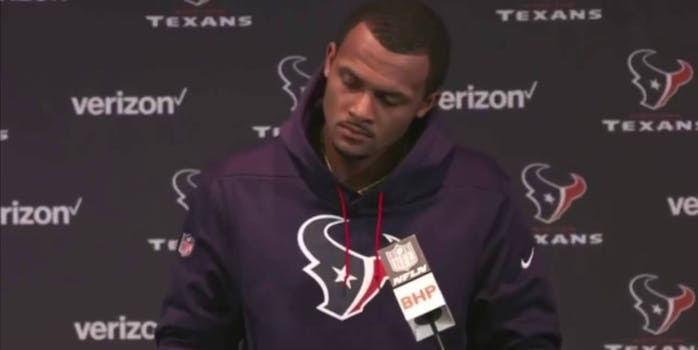 How to stream Chiefs vs. Texans in NFL Week 6

Two of the NFL's best offenses face off in a heated AFC duel.

The Chiefs looked unstoppable. Until they got stopped.

Last week, the Colts dealt the Kansas City Chiefs their first loss of the season. Following that, the Chiefs face the Houston Texans, one of the only offenses as explosive as their own.

You can usually count on Kansas City for around 30 points a game. It was shocking when the Chiefs were held to just 13 points last week. An out-of-sync KC squad and a possibly injured Patrick Mahomes led to one of the worst offensive outings for the team in recent memory.

The Colts hammered at the Chiefs two Achilles’ heels: man coverage and run defense. We can trust that coach Andy Reid and Mahomes can scheme to fix their offensive missteps, but stopping the run has been a real problem. They have been allowing a 100-yard rusher pretty much every week.

Kansas City’s problems seem mostly minor, and before we get carried away, we should mention that a “bad day” for Mahomes is still 321 yards and no interceptions.

Luckily for KC, Houston has been a so-so running team that excels in the passing game. During the games they’ve won convincingly, Deshaun Watson has thrown for a ton of yards. If they are depending on Duke Johnson and Carlos Hyde to grind out a win, it isn’t always so pretty.

Part of the reason the Texans have had to put up a lot of points to win is that their defense is fairly average. A secondary that has been a liability continues to improve, but it remains beatable.

These teams are similarly offensive-minded with some defensive liabilities. While Kansas City has the more productive offense under Mahomes’ amazing play, the Texans defense is a little stronger and less prone to giving up big plays.

The edge goes to the Chiefs here if Mahomes is back to form, but this could be a pretty entertaining shootout that comes down to some last-minute heroics.

There are a number of options for watching Chiefs vs. Texans on streaming platforms that carry CBS. However, consult a coverage map to see what game your regional channel will be playing.

Travis Kelce, Tight End: Patrick Mahomes continues to find new weapons every week. Last week Byron Pringle had 103 yards and a touchdown. But other weeks it has been Mecole Hardman and Demarcus Robinson finding fantasy glory. Kelce and Mahomes remain the only sure things on this squad. For anyone else, be sure to look at all of their production, not just the past week or two.

DeAndre Hopkins, Wide Receiver: It will be tempting to run and trade for Will Fuller after his 217-yard, three-TD day last week. But if you look at Texans box scores week-to-week, Hopkins is still the only surefire starter among Houston skill players.

Kansas City Chiefs vs. Houston Texans: Why it matters

These are the two best offenses in the AFC, and both of these teams would like a bye come playoff time. Though both teams are favorites to win their respective divisions, losses in big games like this matter for post-season placement.

The Texans can have their off weeks, but they can hang with any team in the league, as they proved with their 53-point performance against Atlanta. Kansas City seems to find a way to win almost every week under Mahomes, though, and it’s tempting to see the Colts game as a fluke.

Kansas City will look to get back on track here in a shootout. Don’t be surprised if both teams put up 40 points here. But no matter how many touchdowns go on the board, expect the Chiefs to keep a narrow edge.