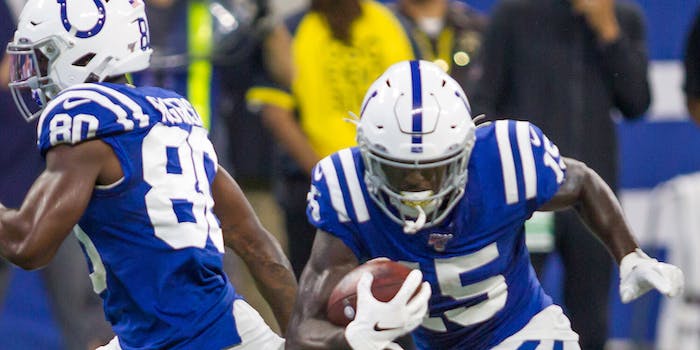 How to stream Chiefs vs. Colts on Sunday Night Football

Can the injury riddled Colts put up a fight against the unbeaten Chiefs?

Great teams find a way to win even when they aren’t playing their best football.

Neither the Kansas City Chiefs nor the Indianapolis Colts played particularly well last week. But the Chiefs persevered and pulled out a win against the Lions, while the Colts got beaten badly by the Raiders.

Though Jacoby Brissett has been surprisingly effective in the aftermath of Andrew Luck’s surprise retirement, the injury-plagued Colts look like a decent team destined to stay in the middle of the pack.

Even behind a stout offensive line, Jacoby Brissett needs his stars to succeed. With T.Y. Hilton injured and Marlon Mack banged up and on the sidelines for most of Week 4’s game, a valiant effort from Zach Pascal (four catches for 72 yards) wasn’t enough to get the job done.

To win games, Brissett also needs help from his defense. The Colts had difficulty getting to the quarterback, combining for only one sack on the day against the Raiders. Injuries to linebackers and in the secondary showed just how weak the defensive line really is, and it isn’t pretty. Without Darius Leonard leading the team at linebacker, this defense is in rough shape.

Patrick Mahomes had a very mortal game against the Bucs, going 24 for 42 for 315 yards, but the Chiefs still won. Strong running from LeSean McCoy helped keep KC in the game, but it was the defense that saved the day.

Cornerback Beshaud Breeland had an amazing fumble recovery that he turned into a 100-yard touchdown run. Though the secondary and run defense had their problems, the pass defense, led by a strong performance by Chris Jones, held it together for Kansas City. They got to Matt Stafford four times, and held off the Lions.

In their sloppiest game of the season to date, the Chiefs still found a way to win. Despite some hiccups, we should expect them to keep doing just that.

LeSean McCoy, Running Back: Mahomes is so good that it is actually hard to tell who is going to catch passes besides tight end Travis Kelce. However, McCoy’s career has been rejuvenated in Kansas City and should be treated as at least a flex and possibly an RB2 the rest of the way.

Marlon Mack, Running Back: Mack left the game early in Week 4, but early reports say he should be good to go this week. Considering Jacoby Brissett was the leading rusher in his absence, he shouldn’t have any fears about losing the starting job.

Chiefs vs. Colts: Why it matters

Even a totally healthy Colts team would have trouble handling these Chiefs. Despite a weaker performance last week, Mahomes is still averaging 377 yards per game. Brissett’s average is 227.

While Kanas City’s defense has its problems, giving up around 30 points a game, the Colts are equally unimpressive. They went into Week 4 at 21st and 25th in terms of DVOA respectively, and didn’t do anything much differently last week.

It isn’t impossible to imagine the Colts stealing a win from Kansas City. With Mack back, and better defensive play, this game could be competitive.

However, with the game in Arrowhead, barring another uncharacteristically weak performance from Mahomes and a stifled LaSean McCoy, it is hard to imagine the Colts taking out one of the league’s best teams in their own stadium.

Look for the Chiefs to continue their dominance in primetime on Sunday night.